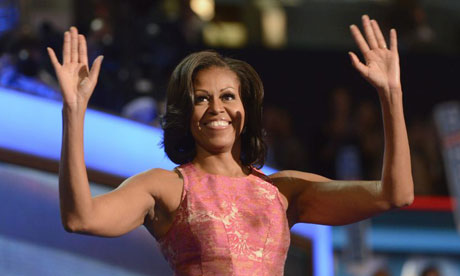 Michelle Obama electrified Democrats on the opening night of the party’s national convention with a powerful and unashamedly personal speech in which she invoked the future of her own children as she made the personal and political case for her husband’s re-election.

In an address that brought the 23,000-seat arena to its feet as delegates chanted “four more years”, the first lady sought to persuade wavering voters that Barack Obama retained the same qualities that attracted them to him in 2008.

She deftly drew sharp contrasts with his Republican opponent Mitt Romney, avoiding attacking him directly but making clear her belief that he was deeply out of touch with ordinary people.

She described how both she and Obama had risen from modest beginnings, and said he was driven by a desire to see others get the same chance.

“He believes that when you’ve worked hard, and done well, and walked through that doorway of opportunity, you do not slam it shut behind you,” she said. “You reach back and you give other folks the same chances that helped you succeed.”

Even before Mrs Obama took the stage, the convention in Charlotte, North Carolina, appeared to have more energy and enthusiasm than the Republican event in Tampa, Florida, last week.Â  Buoyed by a series of strong speeches from the evening’s earlier speakers, there was a boisterous, party atmosphere that contrasted with the relatively subdued mood in Tampa.

The Democrats highlighted the contrast with the Republicans on issues of equality and diversity as speaker after speaker made the case for Obama in stronger terms than the party has managed during his first four years. They lambasted Romney and his running mate, Paul Ryan, over healthcare, abortion, equal pay, same sex marriage and offshore bank accounts.

At one point Stacy Lihn, whose toddler daughter Zoe has congenital heart disease, told the crowd how Obama’s healthcare legislation had secured life-saving treatment for her child. “Obamacare provides my family security and relief,” said Linh as she attacked Romney for pledging to repeal the reforms.

Michelle Obama used her primetime speech to pull together many of these themes. The thrust was personal, talking about her early life with Obama, her reluctance to spoil that by him running for the White House and, in the end, her relief that he had not been changed by the experience but made stronger.

“Being president does not change who you are: it reveals who you are,” she said.

She acknowledged that it had been tough for him at the White House, with many struggles that had tested him. But he had done what was right, influenced by the disparity that he seen growing up, particularly the treatment of his mother, repeatedly passed over for promotion because she was a woman. That was why the first piece of legislation he passed was equal pay for women.

He also ignored people who said he should leave health reform to another president, doing it because he thought it was right. “No one in this country should ever go broke because of an accident or illness,” she declared.

At times the speech was sentimental, particularly when she said she loved her husband more now than four years ago, and her declaration that the most important thing in her life was being “mom-in-chief”.

In a theme that will be heard over and over again through over the next few days, she returned repeatedly to the issue of opportunity.Â “Barack knows what it means when a family struggles, he knows what it means to want something more for your kids and grandkids,” she said. “Barack knows the American dream because he’s lived it, and he wants everyone in this country to have that same opportunity, no matter who we are, or where we’re from, or what we look like, or who we love.”

In the battle of the spouses this will go down as a win for the Obamas, with the first lady’s delivery crisper and her speech better written than Ann Romney’s last week.

One delegate, Jim Hussey, a retired electrician form Delaware, said: “I thought it hit all the right parts. It was a little sentimental but I understand why: she loves her husband and family.” Â Overall he thought the point she was putting across was one of fairness and equal opportunity.

As a first lady rather than an elected politician she carefully avoided making any overt attacks on Obama’s Republican opponent, Mitt Romney. But plenty of other speakers did.

The other main speaker of the evening was Julian Castro, the mayor of San Antonio, Texas, a rising star of the party who filled the same keynote speaking slot that catapulted Barack Obama to prominence at the 2004 convention.

He set out the ideological differences between the Democrats and Republicans over the role of the federal government and the part it plays in the economy.

While the Republicans favour lower taxes and slashing regulation to ignite the economy, the Democrats argue in favour of higher taxes on the wealthy to help lift up the working class. “We all understand that freedom isn’t free,” Castro said. “What Romney and [Paul] Ryan don’t understand is that neither is opportunity. We have to invest in it.”

In one of the most memorable lines of the night, Castro said: “In the end the American dream is not a sprint, or even a marathon, but a relay. Our families don’t always cross the finish line in the span of one generation. But each generation passes on to the next the fruits of their labour.”

The carefully orchestrated opening day combined a defence of Obama’s record with vague hints of what he might do if he wins a second term. Â But there was also a lot of the negative campaigning that has worked well for the Obama team so far, bashing Romney

One of the biggest crowd-pleasers was the former Ohio governor Ted Strickland, who, in Â a punchy speech, accusing the Republican of lacking economic patriotism. “Barack Obama is betting on the American worker. Mitt Romney is betting on a Bermuda shell corporation,” Strickland said.

The Chicago mayor, Rahm Emanuel, Obama’s former White House chief of staff, said there was a lot at stake in November’s election.Â “Each crisis was so deep and so dangerous; any one of them would have defined another presidency,” Emanuel said. “We faced a once-in-a-generation moment in American history. Fortunately for all of us, we have a once-in-a-generation president.”

One of the standout speeches of the night was Lily Ledbetter, champion of equal pay for women, who took Goodyear to court after discovering she was being paid less than her male counterparts. She said a few cents might not matter much to Mitt Romney with his tax havens but it did to her.

The first bill Obama signed into law in 2009 was one inspired by Ledbetter. “It is about women. About equality. About justice,” she told delegates.