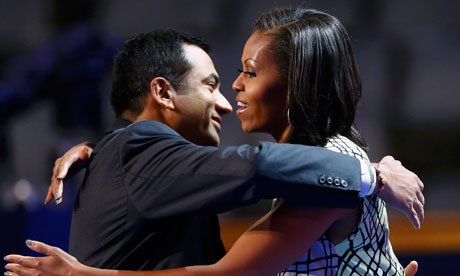 First lady Michelle Obama will have the starring role on the opening day of the Democratic convention, tasked with winning back disaffected voters and defending some of the president’s more unpopular decisions such as healthcare reform.

Campaign aides told reporters before the first lady’s primetime keynote address in Charlotte, North Carolina on Tuesday night that she was in the best position to offer a personal insight into the president’s almost four years in office, a period that has seen the euphoria that greeted his election give away to disillusionment.

Stephanie Cutter, Obama’s deputy campaign manager, said that unlike Ann Romney at the Republican convention last week, Michelle Obama did not need to introduce herself or her husband to the American people.

Michelle Obama, who is consistently more popular than her husband in opinion polls, is aiming to cement the support of women, Latinos and the gay community â€“ the president has a significant lead among all three â€“ and re-energise liberals disappointed that the president has not done enough. In her speech, she will spell out some of Obama’s personal motivations behind key decisions.

The prevailing mood among delegates in Charlotte is anxiety over Obama’s re-election prospects as economic recover remains sluggish â€“ a stark contrast to the optimism and confidence of the 2008 convention.

The economy will dominate the event, which kicked off amid a row over whether voters were better off now than four years ago. A poll for the Hill magazine on Monday found that 52% of voters surveyed felt worse off now than when Obama took office, and that 54% that he did not deserve re-election based solely on his job performance.

Obama will attempt to overturn those concerns on Thursday night at a rally in a 73,000-seater football stadium where he will deliver his speech accepting the Democratic nomination. It will focus almost entirely on the economy, and will lay out a “road map for what the next four years should look like”, White House communications director Dan Pfeiffer told a Politico panel session on Tuesday morning.

Michelle, who initially advised her husband against going into politics and who was reluctantly co-opted into campaigning in 2008, has been much more active in this campaign, particularly with fundraising. She has given 24 speeches since March in 10 states.

Speaking at an ABC News and Yahoo News event in Charlotte, Cutter indicated that the first lady would be talking about some of the personal experiences in the president’s life that has led him to make some of the difficult and “unpopular” choices he has made in his first term.

She gave the example of his health reform, dubbed “Obamacare” by his opponents. The health reform was motivated in part, Cutter suggested, by the fact that Barack Obama‘s mother, Ann Dunham, struggled to find health insurance as she was dying from cancer.

“Very politically unpopular, a tough thing to get done, we’ve been trying for 70 years to get it done. But his mother had a healthcare story in her final days, and it was that memory that drove him to get healthcare done.”

Cutter also pointed to the Lilly Ledbetter Fair Pay Act, the first bill signed into law by the president that increased the power of women suffering from discrimination to seek legal redress. She said that the president’s grandmother had been passed over for promotion at the local bank where she worked by male workers doing the same job she did.

“These choices come from a place of personal experience, and Michelle can speak very personally about that motivation and values and all of the things that drive him to do the things he does. She is a first-person testament to what the president has done over the last four years to show some pretty strong leadership in trying times,” Cutter said.

Ledbetter is among those invited to speak to the convention.

Obama and vice-president Joe Biden are to be formally nominated as the party’s White House candidates on Wednesday.

In his speech on Thursday, Obama will set out his plans for a second term, including completion of healthcare and education reforms.

A theme that appears to be developing from the Obama campaign is that should voters give him the chance of a second term, he would use it to create “an economy built to last”.

Ben LaBolt, Obama’s campaign press secretary, said the focus of the convention would be “on the pillars of an economy built to last: energy, manufacturing, education, restoring economic security for the middle class with investments in these areas instead of cutting back.”

The party would hear, he said, “where we are going to go from here. That’s what we didn’t hear [from the Republicans] in Tampa last week.

But other campaign staff hinted that there would be little new in the way of policy detail in Obama’s speech.

Aides suggested that the president would also show an element of humility over his record.

Senior White House adviser Valerie Jarrett, an old ally of the Obamas from Chicago and now one of the most powerful people in the administration, admitted the president had made a mistake in his first year in office by failing to get out around the country to sell his reforms.

Speaking at a convention event organised by Bloomberg, she said the president “did not appreciate how important it was to tell that story”.

Wednesday’s keynote speech by Bill Clinton, who was critical of Obama during the 2008, is the only convention speech not yet vetted by the Obama campaign team.

Jen Psaki, a campaign spokeswoman travelling with the president, claimed to be relaxed about the lack of an advance copy: “We have absolute confidence about what he’s going to say.”