After Flight 17 was shot down in eastern Ukraine on July 17, the Federal Aviation Administration expanded an existing regulation that prohibited certain flights from operating in the region. The FAA regularly issues airspace restrictions and prohibitions for U.S. aircraft traveling through potentially hostile airspace.

Here’s where the FAA has issued flight advisories and prohibitions for U.S. aircraft as of July 18.
Flight prohibitions
Ethiopia

The FAA prohibits flight operations at or below 20,000 feet, except where necessary for takeoff in an adjacent country. View document Â»
Libya

A special notice warns that â€œNorth Korea has a history of launching short-range and medium-range ballistic missiles with no warning.â€ The FAA advises caution in and around the Pyongyang Flight Information Region east of 132 degrees east longitude and prohibits flight operations west of that line. View document Â»
Somalia

Flight operations are prohibited in Somalian airspace at or below 20,000 feet, except where necessary for takeoff in an adjacent country. View document Â»
Ukraine

The FAA had already prohibited flight operations over Crimea beginning in April. After Flight 17 was shot down July 17 in a separatist-controlled area of Ukraine, the FAA expanded the prohibited area to encompass the eastern part of the country. View document Â»
Potentially hostile regions
Afghanistan

According to the FAA, that rebels shot down a civilian Boeing 727 plane in 1998 â€œdemonstrates that the rebel forces . . . can and will shoot down civil aircraft they believe to be carrying government soldiers or weaponry.â€ Aircraft are advised not to fly through the republic at an altitude of less than 15,000 feet. View document Â»
Egypt Sinai Peninsula

The advisory warns against flight operations over the Sinai Peninsula at or below 24,000 feet due to the risk of attacks from small arms, rocket-propelled grenades, anti aircraft fire and MANPADS. View document Â»
Iran

The FAA does not describe specific instances of hostility in Iran but notes that the State Department issued a travel warning and â€œthe U.S. government does not currently maintain diplomatic or consular relations with the Islamic Republic of Iran.â€ View document Â»
Kenya

The FAA discourages flight operations over Syria, saying, â€œNo part of Syria should be considered immune from violence.â€ The administration warns that low-flying aircraft are threatened by MANPADS and anti aircraft artillery. View document Â»
Yemen

Terrorists possessing MANPADS â€œhave threatened and targeted both international civil aviation and airports in the country,â€ according to the FAAâ€™s advisory. View document Â» 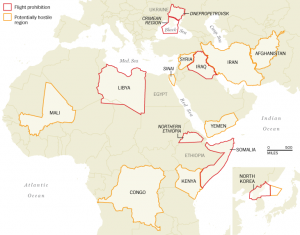