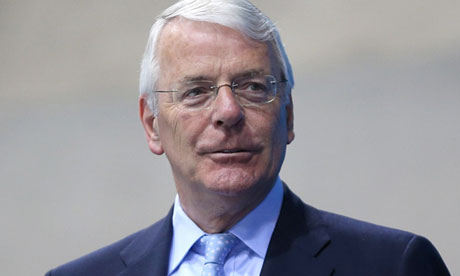 The photographers who took “distasteful” topless pictures of the Duchess of Cambridge are “peeping toms” who should be prosecuted, Sir John Major has said.

The former prime minister, who was appointed as a guardian to the duke and his younger brother when Diana, Princess of Wales died in 1997, said that a boundary had been crossed.

Speaking on the Andrew Marr Show on BBC1, Major said it was “absolutely right” of Clarence House to take the publishers of the French edition of Closer magazine to court. “The boundaries have plainly been crossed. I don’t think we need to mince words about these photographs. The way they have been obtained is tasteless.

“It is the action of a peeping tom. In our country we prosecute peeping toms. That is exactly what they have done and they have been peeping with long lenses from a long way away. They are very distasteful.

“I have often in the past been critical of the British media. I thoroughly applaud the fact that they will not touch these pictures with a barge pole. They deserve credit for not doing so. It is a pity that other people overseas have lower standards.”

Asked what he would say if he bumped into the former Italian prime minister Silvio Berlusconi, whose family owns a magazine that is planning to publish more of the photos, Major said: “It is very unlikely and it might not be a good conversation.”

Major’s comments came as the newspaper owner Richard Desmond was taking steps to close the Irish Daily Star, which had taken the decision to publish the topless pictures of the Duchess of Cambridge sunbathing while on holiday in France.

The paper had been condemned by St James’s Palace after it ran 13 pictures of the duchess along with an image of the French Closer magazine, which first published the pictures on its front cover.

Desmond is convinced he has the power to shut down the whole operation, given that he owns the British title. Insiders believe he has already instructed lawyers to begin the necessary legal action to terminate publication. Its website remained down on Saturday evening. Desmond’s company, Northern & Shell, co-owns the Irish Daily Star with the Dublin-based Independent News & Media (INM).

It emerged on Saturday that 200 pictures taken of the couple at their private retreat were being offered to publications around Europe. Alfonso Signorini, editor of Chi magazine, an Italian gossip title, told the Observer he planned a 26-page feature containing 30 pictures to be published on Monday. He said the pictures “will not damage her dignity, nor are they in any way morbid”, adding that they contain “normal topless shots, except Kate happens to be the future Queen”. He added: “They are not scandalous, there are no unpublishable pictures. It is just a huge scoop.”