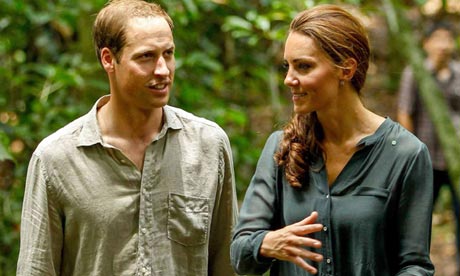 Prince William and Kate, the Duchess of Cambridge, on a tour of the Danum Valley rainforest in Malaysia. Photograph: Rex Features/KeystoneUSA-ZUMA

The row over publication of photographs of a topless Duchess of Cambridge sunbathing on holiday in France intensified on Saturday after the Irish Daily Star published the pictures in its Saturday edition.

St James’s Palace denounced the move as motivated by greed and has sought to dissuade others from using the pictures by launching legal action against a French magazine, Closer, after it printed four pages of the shots of Prince William and his wife, Catherine, at the ChÃ¢teau d’Autet in Provence.

However, the crisis has deepened with the decision by a British publisher to use the paparazzi shots for the first time â€“ albeit not in its British publications which would, on the face of it, breach the UK editors’ code of practice.

The move to publish in the Republic of Ireland came after the editor of an Italian gossip magazine announced he was to use 30 previously unseen topless shots over 24 pages under the headline “The Queen is Naked” on Monday.

The editor of the Irish Daily Star, Mike O’Kane, said the pictures would not feature in the Northern Ireland and British editions. But Richard Desmond, chairman of co-owner Northern and Shell, said he was taking “immediate steps” to close down the joint venture with Ireland’s Independent News and Media, which runs the paper. St James’s Palace, which had described the publication of the photos in France as “grotesque and totally unjustifiable”, said: “There can be no motivation for this action other than greed.”

O’Kane said the printing of the pictures was only causing upset in the UK, and not the rest of Europe. “The duchess would be no different to any other celeb pics we would get in, for example Rihanna or Lady Gaga. She’s not the future queen of Ireland, so really the only place this is causing fury seems to be in the UK, and they are very, very tasteful pictures.”

The newspaper carried an image of Closer magazine on its front page and ran 13 photos of the duchess over a spread inside under the headline “Kate fears new intimate pics”.

The editors’ code of practice in the UK stipulates that it is “unacceptable to photograph individuals in private places without their consent” and defines private as “public or private places where there is a reasonable expectation of privacy“.

A spokesman for Northern & Shell sought to distance the company from the decision to publish. “The Irish Daily Star is a joint venture with Independent News & Media over which we have no editorial control.

‘We are consulting with our lawyers as a matter of urgency over what we believe to be a serious breach of their contract. We abhor the decision of the Irish Daily Star to publish these intrusive pictures of the duke and duchess which we, like St James’s Palace, believe to be a grotesque invasion of their privacy.”

The royal couple could sue the Irish Daily Star in Britain because it is owned by a media company with some of its assets in the UK, a top Irish media lawyer warned on Saturday, saying: “If the paper’s owners have assets in the UK then the duke and duchess could enforce a judgment against that publisher in a British court.”

He also confirmed that the heir to the throne and his wife would make a complaint to Ireland’s press ombudsman, who has the power to demand that a publication prints an apology.

He said that the Irish Daily Star should be careful of “leakage across the border” in terms of its southern edition being sold in Northern Ireland where UK jurisdiction would apply.

Peter Preston, the Observer’s media commentator, said: “The Daily Star sells over 64,000 in the Republic. It’s a big player, signed up to honour and obey the Irish press ombudsman who so impressed Lord Justice Leveson.”

Preston said there were ramifications from printing the pictures “far beyond the simple point that Irish law is not English â€“ or French â€“ law where privacy is concerned.

“How many cases can the Prince of Wales â€“ expensively, slowly â€“ mount? How many extra copies of overseas magazines or papers will be sold on the back of them? It’s all an object lesson in hoping that old law can manage new sorts of crisis. And that it’s high, digital time to move on.”