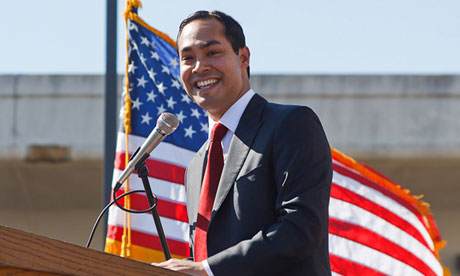 When a little-known state senator in Illinois came to deliver the keynote address at the Democratic National Convention in Boston in July 2004, proclaiming “the audacity of hope”, it propelled one Barack Obama into the national consciousness and four short years later into the White House. Tuesday night will be the chance of a little-known mayor from Texas, prompting questions of whether lightning can strike twice.

Julian Castro, the mayor of San Antonio, takes the stage in Charlotte this evening as one of the youngest politicians to be granted the honour of keynote speaker â€“ at 37 he is five years younger than Obama was in 2004. More significantly, he will be the first Latino to address the Democratic convention in this way, breaking one more glass ceiling for this rapidly rising demographic force in American politics.

Amid the inevitable speculation about whether Tuesday night will be the start of a journey that will put Castro in the White House in 2016 or 2020, the mayor himself, who is known for his poise and composure, is having none of it. He points out soberly that he is not the first Hispanic to deliver a keynote address at a party convention â€“ Katherine Ortega did so at the 1984 Republican National Convention â€“ and swats aside talk of him following in Obama’s footsteps.

“I’ll be in San Antonio for the next several years, if the voters will have me, and if I do a good job I’ll look around and see what else there is available for me,” he told the Guardian as he took a break from preparing to deliver the speech of his life.

Despite such protestations, Castro and his speech are being talked up heavily by the Democratic hierarchy. Jim Messina, Obama’s campaign manager, told a meeting of the party’s Hispanic caucus that he had seen a couple of drafts of the address and predicted that “10 years from now you are going to say I was there when he gave that speech”. Debbie Wasserman Schultz, chair of the DNC, called Castro “one of the key rising stars in our party and he is going to electrify the arena”.

The mayor talks passionately about 2012 as a crucial moment for the US, especially for American Latinos. “There has never been a starker difference between the Democratic and Republican parties over how they represent Latinos. The problem of the Republican position is not one of tone, it is their policies,” he said.

He cites several ways in which he thinks Mitt Romney, Obama’s Republican challenger, has staked out a position inimical to Hispanics. He points to Romney’s pledge to repeal Obamacare on his first day in office and how that would be a blow to the 9 million currently uninsured Hispanic Americans who will have access to affordable health cover under the reforms.

He points too to Obama’s doubling of the Pell grants that fund student loans and have brought an extra 150,000 Hispanic students in reach of college education â€“ and Romney’s promise to slash federal funding for the US education department. And he talks about the 8 million Hispanic children who have benefited from changes in tax credits which he contrasts with Romney’s tax policy that he said would favour the rich.

“Given all that it’s no surprise that President Obama is winning the Latino vote by 70 to 30%,” Castro said. “The policies the Republicans have embraced are contrary to the interests of many families including Hispanics.”

Castro’s ability to articulate the contrast between Obama and Romney in terms of the impact of their policies on Hispanics is of obvious appeal to his party’s elite. The Latino population in the US has grown over the past 30 years from 6% to 16%, making them the largest minority in the country.

Though just one in 10 eligible voters are Hispanic their presence is concentrated in vital battleground states such as Florida, Virginia, Colorado and Nevada. As Castro matures as a politician, the power of his ethnic group will grow with him â€“ every month some 50,000 American Latinos turn 18 and gain the right to vote.

No wonder then that the Democratic Party is focusing its attentions on the Latino vote this year. Castro aside, there are more than 800 Hispanic at the Charlotte convention – the largest number in US history.

The Hispanic politician in Castro was inherited from his mother, Rosie Castro, an outspoken fighter for Latino rights in Texas. She passed on a fierce belief in the value of education to her twin boys â€“ Julian and his brother, Joaquin Castro, born one minute after him. The two are identical, to the extent that they have to signal the difference between them when appearing together at public functions by wearing different coloured ties. Julian also has the advantage of a wedding ring â€“ he is married to a teacher called Erica with a three-year-old daughter â€“ while Joaquin is single.

The brothers have stuck closely together through the years, propelled by their mother’s insistence on self-betterment. They went together to Stanford and then both went on to Harvard law school (another echo of the Obama life story). From there they both entered Texan politics, Julian rising to be San Antonio mayor and Joaquin entering the Texas legislature from where he is currently bidding to become the representative of the 20th district seat in the US Congress.

Though Julian Castro, like his brother, is grounded in the Hispanic community, to define him exclusively as a Latino politician would be to make a big mistake. For a start, he doesn’t even speak fluent Spanish â€“ he was brought up speaking English at home, studied Latin and Japanese in school, and in the past few years has quietly been taking Spanish lessons.

His world view is focused around policies and public service, not ideology, and though his Spanish is ropey he is fluent in the language of business. As mayor of San Antonio, the seventh most populous city in the US, he has seen it prosper to become the only major American city with a triple A rating from all three ratings agencies.

His ambition as mayor, he said earlier this year, was to “orchestrate the greatest turnaround in achievement that any big city has seen within a decade, boosting the number of children showing up ready to learn, graduating from high school and finishing college”. When all children in Texas enjoyed the opportunities he had done, then the Lone Star state would be a guiding star for all of America.

Such emphasis on opportunity and success, rather than narrow ethnic politics, led the New York Times to dub him a “post-Hispanic Hispanic politician”. To which Castro tells the Guardian: “I generally don’t like labels. I have benefitted from those who came before me who went through a civil rights struggle to give us the opportunities they never had.”

But he adds that he sees himself as one of a new strain of minority politicians â€“ he name checks the mayor of Newark, Cory Booker â€“ who have “a can-do attitude and are comfortable with the business community, but are also at home in the neighbourhoods that we grew up in.

“I don’t think I’m unique â€“ I’m part of a new generation of public servant whose goal is to represent everyone. I’m very proud of my heritage, but all of us are Americans first.”