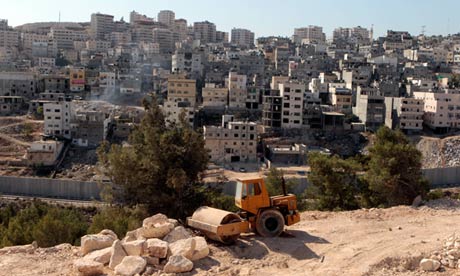 Israel’s prime minister Binyamin Netanyahu as ordered thousands of new homes to be built on occupied territories after the UN voted to recognise a Palestinian state. Photograph: Jim Hollander/EPA

The Israeli prime minister, Binyamin Netanyahu, has ordered the construction of thousands of new homes in Jewish settlements in the occupied territories in what will be widely interpreted as retaliation for the United Nations vote to recognise a Palestinian state on Thursday.

Israeli officials said the construction would expand existing West Bank settlements and build more homes for Jews in occupied east Jerusalem, where the government is attempting to diminish the proportion of Arab residents. Netanyahu also ordered the speeding up of planning to link Jerusalem with a Jewish settlement, Ma’aleh Adumim, in a move that would cut deep into a future Palestinian state based on 1967 borders. The US and Europe have long asked the Israeli government not to build there.

The announcement is a reflection of Israel‘s anger at the vote, and the Palestinian leadership at pushing for it. The Israeli move drew strong criticism from Europe. “If Israel confirms these decisions officially, then it is an exercise in the most cynical, self-obsessed and self destructive policy-making imaginable,” said one European diplomat.

He also condemned the timing, just as the Jewish sabbath began and the government shut down so that it could not be reached, as “a breathtakingly brazen attempt to dodge the bullet of international condemnation â€¦ All in all, outrageous,” he said.

Israel condemned the UN’s recognition of a Palestinian state as damaging to peace while also, more privately, expressing concern about how many European countries backed the move.

Palestinian officials were mixed in their reactions, saying that if UN recognition is not used to renew the dormant peace process it will lead to more violence. Hamas described the vote in New York as a victory for armed resistance.

The Israeli government worked hard to portray the UN decision to recognise a Palestinian state as undermining peace. The prime minister’s spokesman, Mark Regev, described the move as “negative political theatre because it takes us out of a negotiating process”. Dore Gold, a former Israeli ambassador to the UN, told the BBC that the Palestinian move was a “massive violation” of the Oslo peace accords.

He said that if the Palestinian president, Mahmoud Abbas, attempted to use the new status to declare an independent state then Israel would have to act and may go so far as “annexing territory”.

But other Israeli officials sought to downplay the vote, saying it was symbolic and did not require action unless the Palestinians also acceded to the international criminal court (ICC), among other possibilities.

The Palestinian leadership rejected pressure from the US and Britain to renounce its new right to go to the ICC, but has said it is not likely to accede immediately. Instead, Abbas sees the issue as a card that can be played in negotiations, particularly over the issue of Jewish settlements â€“ which some international lawyers believe are a breach of the Geneva convention that prevents “belligerent nations” from moving their nationals to live on occupied territories.

Salam Fayyad, prime minister of the Palestinian Authority, warned in Washington that if the UN vote is not used to renew the dormant peace process, it will strengthen armed groups such as Hamas. “What we can all do is to see how we can take advantage of what happened, to enhance the political process. I hope more will begin to see things this way. Let’s get together and have a serious discussion on whether things in the past few years proceeded the way they should have proceeded. We demonstrated [that] we Palestinians can govern ourselves in an effective way,” he said.

The Hamas leader, Khaled Meshaal, said that the UN vote was in parallel with what many Palestinians see as a victory over Israel in Gaza earlier this month. He told Reuters that armed struggle was necessary in conjunction with diplomacy.

“Negotiating without powerful cards on the ground has no meaning,” said Meshaal. “It will turn into begging. This enemy doesn’t give anything unless under pressure.”

But the fact that Israel won the support of just nine countries, including the US, at the UN has caused a degree of alarm inside the Jewish state.

Israeli officials were shocked at the scale of European support for the Palestinian resolution, with France switching sides and Germany abandoning a pledge to vote against. Among EU nations, only the Czech Republic supported Israel.

For months, Israeli diplomats worked to persuade EU governments to, at the least, abstain in the hope that the Jewish state would be able to deride a Palestinian victory as delivered by less than democratic regimes.

Israel’s position was supported by the EU’s foreign affairs representative, Catherine Ashton, and Tony Blair, envoy for the Quartet of the US, EU, Russia and the UN, which is attempting to kick-start peace talks.

But the fighting in Gaza, fears about strengthening Hamas by not supporting a high profile diplomatic move, and the extreme position taken by Israel, particularly its foreign minister, Avigdor Lieberman, who threatened to overthrow Abbas, pushed many countries toward the Palestinian position.

Israel regards France has having led the charge after President FranÃ§ois Hollande abandoned his opposition to the Palestinian UN bid.

Britain abstained and was isolated enough to feel it had to justify its position by saying it would have supported the resolution if the Palestinians had renounced the right to accede to the ICC and had agreed to immediately renew peace negotiations.

The Israelis were particularly stung by the German decision to shift from opposition to abstention. Haaretz reported that Germany moved because of Israeli intransigence on Jewish settlement construction and because Israel had not met previous commitments to the German government. The paper said senior Israeli foreign ministry officials were “shocked” by Berlin’s decision.

In Washington, a state department spokesman criticised the move. “We reiterate our longstanding opposition to settlements and East Jerusalem construction,” he said. “We believe it is counterproductive and makes it harder to resume direct negotiations and achieve a two-state outcome.”