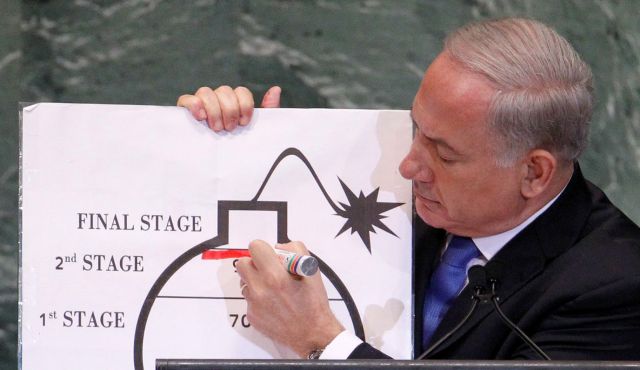 Israel‘s prime minister, Benjamin Netanyahu, used his slot of addressing the UN general assembly on Thursday night to call on the international community to set a “clear, red line” to stop the progress of the Iranian nuclear programme. Mr Netanyahu claimed Iran was only one year shy of a nuclear weapon capability.

PM Netanyahu said Iran was already past 70% completion stage of a nuclear capability adding that by summer next year the Iran’s capability will be more than 90% ready.

He exuded confidence that the United States and Israel, which have disagreed about the urgency of military action, could devise a common strategy to prevent Iran from developing a nuclear weapon.

Netanyahu has tried unsuccessfully to get the Obama administration to agree the setting of red line for Iran’s nuclear advancement.

Iran maintains that its nuclear programme is only meant for energy and has no ambition of nuclear weapons.

Speculation has been rife in the past few months that Israel might take unilateral military action aimed at stalling the Iranian nuclear programme.Â  The new red line as demonstrated by Netanyahu apperas to have shifted to next year summer.Â  The Obama administration has maintained that they will notÂ  allow Iran to build nuclear weapons and US intelligence has not found evidence of Iran’s political decision to build such weapons.

The Israel PM dedicated 75% of his address talking of the threat of a nuclearÂ  capable Iran and only few minutes on the Israel Palestinian conflict. Diplomats point out that by focusing mostly on Iran, Netanyahu effectively closed any scrutiny on his expansion of Jewish settlements into the Palestinian territory.

U.S. President Barack Obama,in his address to the UN general assembly on Tuesday said he would do what it takes to prevent Tehran from getting nuclear arms and that “time is not unlimited” for diplomacy to resolve the issue