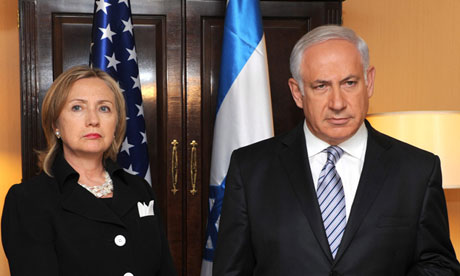 Benjamin Netanyahu’s call for a US deadline on Iran was previously rejected by Hillary Clinton. His latest remarks are also likely to put further strain on his relationship with Barack Obama. Photograph: Moshe Milner/Government Press Office/EPA

The Israeli prime minister, Binyamin Netanyahu, has renewed his demand that the US set out clear “red lines” for Iran over its nuclear programme, in remarks likely to put further strain on his relationship with Barack Obama in the runup to the presidential election.

In interviews on American television networks to mark the Jewish New Year, Netanyahu repeated his call for the US to clarify the point at which it would take military action rather than allow the Iranian nuclear programme to advance.

“You have to place that red line before them now, before it’s too late,” Netanyahu told NBC’s Meet the Press programme on Sunday. Iran would be on the brink of nuclear weapons capability by next spring, he warned.

He also sought to link Iran’s nuclear programme to the murder last week of the US ambassador to Libya. “Iran is guided by a leadership with an unbelievable fanaticism,” he said. “It’s the same fanaticism that you see storming your embassies today. You want these fanatics to have nuclear weapons?”

Both secretary of state Hillary Clinton and defence secretary Leon Panetta have dismissed Netanyahu’s demand for clear red lines. In an interview with Foreign Policy, Panetta accused Netanyahu of trying to force the US into a corner over its Iran policy. “The fact is â€¦ presidents of the United States, prime ministers of Israel or any other country â€¦ don’t have, you know, a bunch of little red lines that determine their decisions,” he said. “What they have are facts that are presented to them about what a country is up to, and then they weigh what kind of action is needed to be taken in order to deal with that situation. I mean, that’s the real world. Red lines are kind of political arguments that are used to try to put people in a corner.”

The row deepened when Israeli officials claimed that Obama had declined to meet Netanyahu when he visits the US towards the end of this month, characterising the move as a deliberate snub. White House officials played down the diplomatic brouhaha.

But there are suspicions in Washington that Netanyahu is attempting to use the US election as leverage to bounce Obama into taking a more hawkish line on Iran. Netanyahu has failed to conceal his preference for Obama’s rival Mitt Romney to enter the White House. Romney has hinted that he would push for military action against Iran’s nuclear programme and has accused Obama of “throwing Israel under a bus”. His chief bankroller, Sheldon Adelson, is also a staunch supporter of the Israeli prime minister.

In an interview with the Jerusalem Post, Netanyahu denied he was interfering in the US election. The accusation was “completely groundless”, he said.

Some Israeli commentators have expressed alarm about the deterioration in an already-frosty relationship between the two leaders.

“To [Obama] and his aides, the tongue-lashing he and Hillary Clinton took from Netanyahu, their depiction as ostensibly preferring Iran above Israel, the co-operation of [Netanyahu] and his aides with Republican congressmen working against the White House, and the leak to the media by the prime minister’s bureau that Obama refused to meet with Netanyahu â€“ all this looks like crude, vulgar and unrestrained intervention in the US election campaign,” wrote Yossi Verter in Haaretz.