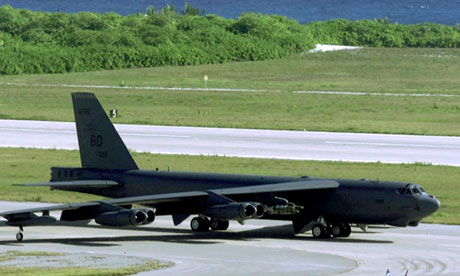 US bombers flew Afghanistan missions from Britain’s Diego Garcia base in the Indian Ocean after 9/11, but the UK is reluctant to grant similar permission for the current military buildup in the Gulf. Photograph: EPA

The UK government has reiterated that it does not believe military action against Iran would be appropriate at the moment, following the disclosure that Britain has rebuffed US requests to use UK military bases to support the buildup of forces in the Gulf.

Downing Street said: “We are working closely with the US with regard to UK bases” but “the government does not think military action is the right course at this point of time”.

David Cameron made a lengthy speech last week urging Israel to show restraint, and pointing to the way in which sanctions are having an impact on the Iranian economy.

The Guardian has been told that US diplomats have also lobbied for the use of British bases in Cyprus, and for permission to fly from US bases on Ascension Island in the Atlantic and Diego Garcia in the Indian Ocean, both of which are British territories.

They have pointed US officials to legal advice drafted by the attorney general’s office and which has been circulated to Downing Street, the Foreign Office and the Ministry of Defence.

It states that providing assistance to forces that could be involved in a pre-emptive strike would be a clear breach of international law on the basis that Iran, which has consistently denied it has plans to develop a nuclear weapon, does not currently represent “a clear and present threat”.

“The UK would be in breach of international law if it facilitated what amounted to a pre-emptive strike on Iran,” said a senior Whitehall source. “It is explicit. The government has been using this to push back against the Americans.”

Sources said the US had yet to make a formal request, and that they did not believe an acceleration towards conflict was imminent or more likely. The discussions so far had been to scope out the British position, they said.

“But I think the US has been surprised that ministers have been reluctant to provide assurances about this kind of upfront assistance,” said one source. “They’d expect resistance from senior Liberal Democrats, but it’s Tories as well. That has come as a bit of a surprise.”

The situation reflects the lack of appetite within Whitehall for the UK to be drawn into any conflict, though the Royal Navy has a large presence in the Gulf in case the ongoing diplomatic efforts fail.

The Guardian has been told that a British military delegation with a strong navy contingent flew to US Central Command headquarters in Tampa, Florida, this summer to run through a range of contingency plans with US planners.

The UK, however, has assumed that it would only become involved once a conflict had already begun, and has been reluctant to commit overt support to Washington in the buildup to any military action.

“It is quite likely that if the Israelis decided to attack Iran, or the Americans felt they had to do it for the Israelis or in support of them, the UK would not be told beforehand,” said the source. “In some respects, the UK government would prefer it that way.”

British and US diplomats insisted that the two countries regarded a diplomatic solution as the priority, but this depends on the White House being able to restrain Israel, which is nervous that Iran’s underground uranium enrichment plant will soon make its nuclear programme immune to any outside attempts to stop it.

Israel has a less developed strike capability and its window for action against Iran will close much more quickly than that of the US, explained another official. “The key to holding back Israel is Israeli confidence that the US will deal with Iran when the moment is right.”

With diplomatic efforts stalled by the US presidential election campaign, a new push to resolve the crisis will begin in late November or December.

Six global powers will spearhead a drive that is likely to involve an offer to lift some of the sanctions that have crippled Iran’s economy in return for Tehran limiting its stockpile of enriched uranium.

The countries involved are the US, the UK, France, Germany, Russia and China. Iran will be represented by its chief negotiator, Saeed Jalili.