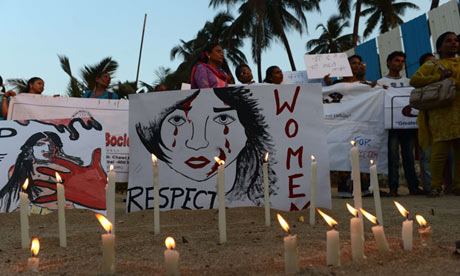 One of many protests in India for better safety for women, which followed the gang rape of a medical student in Delhi. Photograph: Punit Paranjpe/AFP/Getty Images

The 23-year-old â€“ who was severely beaten, raped and thrown out of a moving bus in Delhi â€“ died on Friday in the Singapore hospital where she was being treated.

Her family had been keeping a bedside vigil after she suffered severe organ failure following the attack on 16 December. She was flown to Singapore from India two days ago as her condition worsened.

“We are very sad to report that the patient passed away peacefully at 4.45am on 29 December, 2012 [4.45pm GMT Friday]. Her family and officials from the High Commission of India were by her side,” Kelvin Loh, chief executive of the Mount Elizabeth hospital, said in a statement.

“Despite all efforts by a team of eight specialists to keep her stable, her condition continued to deteriorate over these two days. She had suffered from severe organ failure following serious injuries to her body and brain.

“She was courageous in fighting for her life for so long against the odds but the trauma to her body was too severe for her to overcome.”

Indian prime minister Manmohan Singh said he was deeply saddened by the death and pledged to channel emotions surrounding the case into concrete action, saying: “It would be a true homage to her memory if we are able to channel these emotions and energies into a constructive course of action.”

The woman and a male friend, who have not been identified, were travelling in a public bus after watching a film when they were attacked by six men who took turns to rape her.

The brutality of the assault provoked widespread anger and demonstrations across India, focused largely on the police, politicians and senior officials, by protesters demanding better policing and harsher punishment for rapists.

Indian police have arrested six people in connection with the attack.

Women’s rights campaigners claim many rapes and other sexual crimes in India go unreported with offenders rarely punished, and have called on the government to offer better protection for women.

The Indian government announced on Friday it is to publish the names, photographs and addresses of thousands of convicted sex offenders in an attempt to head off growing anger at what has been seen as a inadequate response by leaders to the problem of sexual violence.

The controversial measure, announced by the minister of state for home affairs, RPN Singh, is to start in Delhi, which has been the focus of the protests following the attack.

Concerns have been raised that identifying convicted rapists will lead to vigilante attacks, but many women’s rights campaigners have backed the move.

“It is true that there is a risk of such attacks but at the moment it is the victim who has to suffer the shame and social ostracism,” said Ranjana Kumari, director of Delhi’s Centre for Social Research. “She can’t get married, for example.

“This will make sure the rapist is shamed. He won’t get a job, or somewhere to live and will be cut off from society. This is a powerful deterrent.”

However, there are now fears the woman’s death could trigger new protests and confrontations with the police, especially in the Indian capital.

Delhi has been on edge since the clashes last weekend. Hundreds of policemen have been deployed in the capital, and streets leading to the main protest site, the India Gate war memorial, have been shut for long periods, causing commuter chaos in the city of 16 million people.