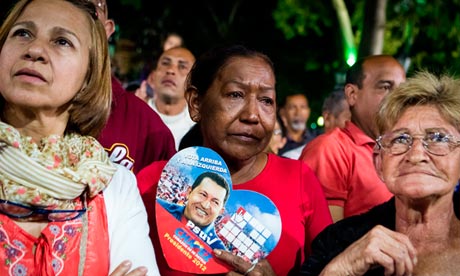 Venezuelans at a mass in Caracas for Hugo ChÃ¡vez, who is said to have a severe lung infection. Photograph: Miguel Gutierrez/EPA

Three months after crowds celebrated another election triumph for the president, the mood in Caracas is transformed

By: Jonathan Watts and Virginia Lopez in Caracas for guardian.co.uk, Friday 4 January 2013 19.21 GMT

The change of mood in Plaza Bolivar could hardly be more dramatic. Less than three months ago, jubilant crowds filled the main square in Caracas to celebrate another election triumph for Hugo ChÃ¡vez with chants of “Oo, ah, ChÃ¡vez no se va” â€“ ChÃ¡vez won’t go.

Now, however, supporters wait anxiously for any scrap of news from Havana, Cuba, where their president is fighting for his life after emergency cancer surgery.

“We are all very confused. We have no idea what to expect. I pray for his recovery but I am expecting the worst,” said JoaquÃ­n Cavarcas, as he scanned the Ciudad CCS newspaper for the latest update.

Next Thursday, ChÃ¡vez is supposed to be inaugurated for a further six-year term of office at a ceremony at the National Assembly, a short walk from the plaza. But the usually gregarious, publicity-loving president has not been seen or heard since his operation on 11 December, prompting speculation that he will not recover in time.

In the latest in a series of grave bulletins, the government said on Thursday that the president was suffering from complications brought on by a severe lung infection after surgery. Aides earlier described his condition as “delicate”. The Bolivian president, Evo Morales, said it was painful to see his close political ally in this state. “The situation for our brother Hugo ChÃ¡vez is very worrying,” he said.

With information scarce, rumours abound. Spain’s ABC newspaper claimed the president was in a coma and kept alive by a life-support system. Social networks are abuzz with speculation that he is already dead.

Ministers and ruling party officials have lined up to deny such reports. Venezuela‘s vice-president, NicolÃ¡s Maduro, has told the country to ignore “enemy” rumours of ChÃ¡vez’s imminent demise. On Friday, he accused ABC of being funded by the extreme right which had backed General Franco’s “despicable regime” in Spain.

On the streets, nobody is giving up on ChÃ¡vez, but there is a growing resignation that he will not attend his swearing-in as scheduled.

“We must wait for him to recover and then swear him into office,” said Ruben Daza, a newspaper vendor. “I don’t think he’ll be back next week. The assembly will have to decide what to do in the meantime, but he is the president and we must wait for his return.”

Posters hanging from street lamps show ChÃ¡vez alongside his daughter pointing down on a sea of supporters with a caption: “Now, more than ever, we are with ChÃ¡vez.”

Until the vote, the interim president should be the head of the national assembly. He is Diosdado Cabello â€“ a former military officer and old ally of ChÃ¡vez and head of a faction within the ruling camp. If there were an election, he would be likely to run the government, while another ruling party figurehead, Maduro, would campaign for a six-year term.

In his last public broadcast before leaving for Havana, ChÃ¡vez urged Venezuelans to vote for Maduro if he became incapacitated.

However, other scenarios are possible. The constitution also states that the president-elect can take the oath of office before the supreme court, which is packed with ChÃ¡vez appointees. Whether he could do this in a foreign hospital is uncertain.

According to Nicmer Evans, a professor of political science at the Central University of Venezuela, only a medical team approved by the supreme court can determine if ChÃ¡vez is unable to govern. For now, Evans says, the president has not resigned so his absence cannot be considered absolute. If he is unable to be sworn into office, Evans thinks the government could call for a provisional “junta” or the supreme justice could declare ChÃ¡vez’s absence temporary, allowing Maduro to stand in for 90 days or until a medical team declares otherwise.

If ChavÃ©z is incapacitated merely in the short term, Jose Ignacio Hernandez, a law professor at the Central University of Venezuela, said the outcome that would best represent the will of the people would be for the head of the National Assembly â€“ Cabello â€“ to temporarily assume power. This is possible under the constitution for a 90-day period, which can be extended for a further 90 days if the assembly approves.

Michael Shifter, head of the Inter-American Dialogue thinktank in Washington DC, said a postponement of the swearing-in ceremony was increasingly likely.

“It is hard to imagine that he will be inaugurated on the 10th,” he said. “I think they will just try to put it off and figure out what to do â€“ whether to do it later or call elections.”

This, he said, was likely to strengthen the hand of the ruling party and put pressure on an opposition that already appears divided over the correct interpretation of the constitution.

Riding a huge wave of emotion, Maduro would then be likely to win any election. His problems, however, would begin once he took power and started to address some of the tough financial and social problems facing Venezuela while trying to maintain unity in a ruling bloc.

“There is clearly going to be a power struggle within Chavismo,” said Shifter. “Cabello is head of a rival faction and in a strong position. He is a crafty guy and he has been waiting a long time. He will follow ChÃ¡vez’s wishes for now, but it’s unclear how long that will last, especially if the armed forces end up playing an important role.”

Maduro and Cabello have both been at ChÃ¡vez’s bedside this week. When they returned to Venezuela on Thursday, they dismissed rumours of a rift as an opposition ploy.

“We’re more unified than ever,” said Maduro. “We swore in front of Commander ChÃ¡vez that we will be united at the side of our people.”

For many of his supporters, it is unimaginable that anyone could fully replace ChÃ¡vez, who has dominated the nation’s politics for 14 years. But even if their worst fears are realised, they say ChÃ¡vez’s legacy will endure.

“I want President ChÃ¡vez to come back, I’ve prayed for his health from the beginning, but at this point I’ve lost all hope. I think the president of the assembly should take over and call for elections in the next 90 days and may the best man win. It’s what the constitution says,” said Sixto Zambrano, a retired soldier.

“I’ve always liked ChÃ¡vez, since the day I saw him as a young man speaking in the barracks, but I’ve seen how cancer goes and one cannot go against that.”

“No one has his charisma,” Cavarcas said. “There will be no leader like him. No one comes close to him, but the revolution and Chavismo won’t end. As long as there are one or two of us left to take this forward, this process will continue.”

In the event of an “absolute absence” by the president elect, Venezuela’s constitution stipulates that elections must be held within 30 days and the interim president should be the head of the national assembly.

That post is currently held by Diosdado Cabello, a former army officer who joined ChavÃ©z in a failed 1992 coup that led to both of them being jailed. The experience cemented their friendship and a political alliance that propelled them to power, with Cabello serving as the president’s chief of staff and in a number of ministerial posts.

If he becomes interim president, it would be his second time as a top-level stop-gap. Cabello took the reins for a few hours after ChavÃ©z was detained in a 2002 coup by the opposition. His electoral record is patchier. From 2004 he served as governor of Miranda state, but lost in a re-election bid against Henrique Capriles â€“ the most likely opposition candidate if a presidential election were to be held.

Despite reports of a rift inside the ruling coalition between a military faction led by Cabello and a civilian faction headed by the vice-president, NicolÃ¡s Maduro, the two have worked together for many years and stressed their unity this week. It is likely that both would respect ChavÃ©z’s wish for Maduro to be the ruling party candidate if a presidential election has to be held.