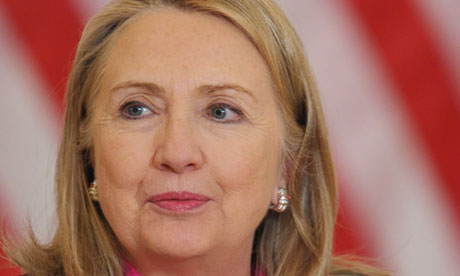 Few details were initially released about Hillary Clinton’s condition after she was admitted to hospital on Sunday. Photograph: Mandel Ngan/AFP/Getty Images

Doctors treating the blood clot suffered by the US secretary of state, Hillary Clinton, revealed on Monday that it is located in a vein between her brain and skull.

In a statement, clinicians said Clinton, 65, was being treated with blood thinners to help dissolve the clot. They said Clinton was making “excellent progress” and had not suffered any neurological damage.

Clinton was admitted to New York-Presbyterian hospital on Sunday after doctors discovered the clot during a follow-up exam to a concussion she suffered in mid-December.

Initially, few details were released about her condition. But late on Monday, Dr Lisa Bardack of the Mt Kisco Medical Group and Dr Gigi El-Bayoumi of George Washington University released a statement that gave the location of the clot.

“In the course of a routine follow-up MRI on Sunday, the scan revealed that a right transverse sinus venous thrombosis had formed. This is a clot in the vein that is situated in the space between the brain and the skull behind the right ear,” they said.

“To help dissolve this clot, her medical team began treating the secretary with blood thinners. She will be released once the medication dose has been established. In all other aspects of her recovery, the secretary is making excellent progress and we are confident she will make a full recovery.”

Clinton fell and suffered a concussion in mid-December while at home recuperating from a stomach virus that had left her severely dehydrated. Her condition prevented her from attending a congressional hearing into the deadly assault on the US consulate in Benghazi, Libya. She also cancelled a trip to North Africa and the Middle East.

Doctors discovered the clot on Sunday and admitted her to hospital for treatment.

Dr Larry Goldstein, a neurologist and director of Duke University’s stroke center, said her condition was “not the most common thing” to happen after a concussion.

He told the Associated Press that the area where Clinton’s clot developed is “a drainage channel, the equivalent of a big vein inside the skull it’s how the blood gets back to the heart”.

Clinton’s condition has led to speculation in private, if not in public, from Democrats keen to see her run for the presidency in 2016.

Bill Galston, a former aide to President Bill Clinton, told the Guardian that health considerations could form part of her decision on whether to run. “She has run herself ragged for four years and she knows how much physical stamina it requires to campaign,” said Galston, now a political analyst at Washington-based thinktank the Brookings Institution.

“Having said that, she is tough as nails and it is important not to make too much of what, in all probability, is a short-term illness,” he added.

Clinton is due to step down as secretary of state in early 2013. The White House has named senator John Kerry, a former presidential nominee and current chair of the Senate’s foreign relations committee, as Barack Obama’s choice to replace her.

It has been widely expected that Clinton would start preparing for a White House run. She has strong support among Democrats, and some senior Republican figures have openly pondered if she would present an unbeatable candidate.

Clinton has alluded to the effects of her heavy travel burden as secretary of state. Asked early last year of her intentions after the 2012 presidential election, she replied: “I think after 20 years, and it will be 20 years, of being on the high wire of American politics and all of the challenges that come with that, it would probably be a good idea to just find out how tired I am.”

Clinton has not been seen in public since the first week of December. She was unable to attend congressional hearings into scathing report into the Benghazi attack, which killed the US ambassador to Libya, Chris Stephens. The report highlighted serious failures in two State Department bureaus that led to insufficient security at the consulate.

The inability of Clinton to attend evidence-giving sessions about the issue in Congress led some rightwing commentators to question the seriousness of her condition.