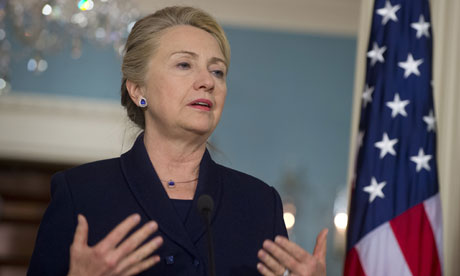 Hillary Clinton told the International Aids Conference in Washington DC in July: ‘We will not back off and we will not back down’. Photograph: Saul Loeb/AFP/Getty Images

The US secretary of state, Hillary Clinton, is launching a blueprint for the eradication of Aids across the globe, which will aim to focus efforts on preventing the spread of the disease and reaching all those who need treatment.

Clinton called for the blueprint in her keynote speech at the International Aids Conference in Washington DC in July, when she pledged that the Obama administration would do whatever it took to end the HIV epidemic. “I’m here to make it absolutely clear that the US is committed and will remain committed to achieving an Aids-free generation. We will not back off and we will not back down. We will fight for the resources necessary to achieve this historic milestone,” she told the 25,000-strong conference.

The blueprint has been masterminded by the US’s global Aids co-ordinator, Eric Goosby, and the executive director of the UN’s Aids organisation, Michel SidibÃ©. It focuses on four themes: taking immediate action to save lives; improving the efficiency of health investments; sharing responsibilities with other countries; and exploiting scientific progress.

Campaigners say an end to the disease may be in sight, with new tools such as drugs that keep people alive and help prevent transmission of the infection.

In the summer, Clinton announced new funding to identify the most effective interventions, to ensure funds were spent where they would do most good. She also spoke of the need to do more for women, who are the majority of those infected, and for marginalised groups such as drug users and sex workers, who are worst affected by the epidemic.

The big question is whether the US administration is prepared to put up a substantial further amount in funding in order to finish the job.

Anton Ofield-Kerr, head of policy at the International HIV/Aids Alliance, said he hoped the blueprint would prove to be “a top-level strategic document that demonstrates US political commitment to maximising the scientific know-how and tools available in order to lead us to the tipping point that will bring about an end to Aids.”

He added: “It’s essential that barriers currently impeding the HIV response, such as criminalisation of vulnerable groups at most risk of the epidemic, are also taken into account and we would hope that the US and the UK jointly, as the largest donors to the global HIV response, would lead the way together on this issue and put in place a joined-up approach that addresses structural, behavioural and biomedical interventions.”