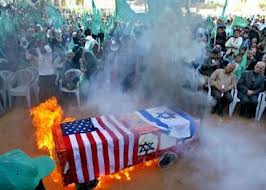 This article titled “Hamas says ‘gates of hell opened’ as Israel kills military leader in Gaza” was written by Harriet Sherwood in Jerusalem, for The Guardian on Thursday 15th November 2012 04.44 UTC

Israel has launched a military operation to eliminate militants and weapon sites in the Gaza Strip, killing the commander of Hamas’s military wing, in a move with potentially serious repercussions beyond its borders.

The assassination of Ahmed al-Jabari in a missile strike in Gaza City was the “start of a broader operation”, according to the Israel Defence Forces, which it named Operation Pillar of Defence.

Ground forces were on standby, the IDF said. The Israeli prime minister, Binyamin Netanyahu, warned that the military was “prepared to expand” its Gaza operation.

A cabinet communique said the IDF would “continue vigorous action against the terrorist infrastructures operating from the Gaza Strip against the civilian population in Israel”. It would, “to the best of its ability, work to avoid harming civilians”.

In a statement on Twitter, the IDF said: “All options are on the table. If necessary, the IDF is ready to initiate a ground operation in Gaza.” The Israeli navy also confirmed that its gunships had fired shells into the Gaza Strip, and there were unconfirmed reports of an incursion in the south of the Gaza Strip late on Wednesday.

As Hamas’s armed wing warned that Jabari’s assassination “had opened the gates of hell”, Israel was braced for a surge in rocket fire from Gaza aimed at communities in the south of the country. Residents in towns in southern Israel were ordered to stay in bomb shelters, and schools in a 40km radius closed.

The United Nations security council held an emergency meeting on Wednesday night to discuss the onslaught and heard a plea from the Palestinian UN observer to stop “war crimes being perpetrated by Israel against the Palestinian people”.

The Israeli ambassador replied that the strikes were launched after days of rocket fire out of Gaza and Israel had a right to defend itself.

The council adjourned without issuing a collective statement and did not schedule any further action or talks on the issue. The UN secretary general, Ban Ki-moon, released statements saying he had spoken to Egyptian President Mohamed Morsi about “the worrisome escalation of violence in southern Israel and Gaza and the need to prevent any further deterioration”.

The conflict could fracture Israel’s shaky relations with the post-revolution government in Egypt, which has strong ties with Hamas. Since Egypt’s former president and ally Hosni Mubarak was ousted February last year, Israel has feared for the durability of the peace treaty between the two countries.

Following the launch of the operation, Egypt recalled its ambassador to Israel, and Israel’s envoy to Cairo was also preparing to leave the country.

Obama made a separate call to President Mohammed Morsi of Egypt, the White House said. The two men agreed on the need to calm down the conflict as quickly as possible.

US state department spokesman Mark Toner denounced Hamas militants and others in Gaza for a barrage of rocket fired into southern Israel. He said the US supported Israel’s right to self-defence. “We support Israel’s right to defend itself and we encourage Israel to continue to take every effort to avoid civilian casualties,” Toner said.

Solidarity attacks from Islamic jihadist groups, which Israel says are operating in Egypt’s Sinai peninsula to the south, and from Hezbollah in Lebanon, which Israel believes has thousands of rockets ready to fire over the northern border, can not be ruled out.

Dan Harel, a former deputy army chief of staff, said: “It might draw them in. There was a volley of fire this morning from the south. We don’t know yet if it came from the Sinai … Hopefully Hezbollah will keep themselves out of the engagement.”

Hamas and other militant organisations could deploy longer-range missiles in its arsenals, some of which can reach densely populated cities such as Tel Aviv and Jerusalem. The IDF claimed multiple air strikes had hit more than 20 underground rocket launchers belonging to Hamas and Islamic Jihad. It said it was targeting long-range rockets, such as the Fajr-5, which has a range of up to 75km.

Jabari, head of Hamas’s military wing, the Izz ad-Din al-Qassam, died when his car was struck in Gaza City by a missile following almost a week of rocket fire from Gaza. Palestinian reports said 10 people died in airstrikes, including two children.

Sami Abu Salem, a local journalist, said civilian cars were bringing the wounded to the Shifa hospital in Gaza City. “I saw women and children bleeding from their heads and necks, and a baby who was burned.” Gazans were stocking up on emergency supplies of canned food in preparation for war, he added.

Jabari is the most senior Hamas operative to be killed by Israel for almost four years, since Operation Cast Lead, its three-week assault on the Gaza Strip during the winter of 2008-09 that left about 1,400 Palestinians dead.

The IDF said Jabari was “a senior Hamas operative who served in the upper echelon of the Hamas command and was directly responsible for executing terror attacks against the state of Israel”.

Its operation was intended “to severely impair the command and control chain of the Hamas leadership, as well as its terrorist infrastructure. This was a surgical operation in co-operation with the Israeli security agency, that was implemented on the basis of concrete intelligence and using advanced capabilities”.

According to Reuters, calls for revenge were broadcast in Gaza after the air strikes. “Israel has declared war on Gaza and they will bear the responsibility for the consequences,” Islamic Jihad said.

The Associated Press reported that “plumes of black smoke wafted into Gaza City’s skies following at least five airstrikes, in an atmosphere reminiscent of Israel’s large-scale 2008-09 attack on Gaza … Outside the hospital [where Jabari’s body was taken], thousands of angry Gazans chanted ‘retaliation’ and ‘we want you to hit Tel Aviv tonight’.”

Israel had warned for several days that it may launch an offensive in Gaza after more than 130 rockets were fired by militants in recent days. On Tuesday, Netanyahu said he would choose “the right time to exact the heaviest price … Whoever thinks that they can damage the daily lives of residents of the south, and that they won’t pay a heavy price for this … they are mistaken”.

Most political figures in Israel endorsed the operation. The Labour leader, Shelly Yachimovich, said Israel was “united in its war against terrorism”. But Dov Hanin, of the leftwing Hadash party, condemned the killing . “In place of the leaders killed, others will grow, and we will only get another cycle of fire and blood,” he said.

Egypt’s foreign ministry has condemned the operation and urged Israel to halt targeted killings. The Freedom and Justice party, the Muslim Brotherhood’s political arm, called the assassination a “crime that requires a quick Arab and international response to stem these massacres against the besieged Palestinian people in the Gaza Strip”.

A spokesman for the Iranian foreign ministry also criticised the killing. The UN secretary general, Ban Ki-moon, called for “an immediate de-escalation of tensions”, and the Palestinian president, Mahmoud Abbas, was reported to have called for an urgent Arab league meeting.