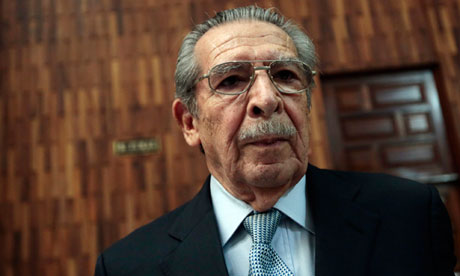 EfraÃ­n RÃ­os Montt held to account for abuses in campaign that killed an estimated 200,000 and led to 45,000 disappearances

By: Sibylla Brodzinsky and Jonathan Watts for The Guardian, Saturday 11 May 2013

The former Guatemalan dictator EfraÃ­n RÃ­os Montt was convicted of genocide on Friyesterday after a court found him guilty of crimes against humanity for his role in the slaughter of 1,771 Mayan Ixils in the 1980s. He was sentenced to 80 years in prison.

It is the first time a former head of state has been found guilty of genocide in their own country.

“We are convinced that the acts the Ixil suffered constitute the crime of genocide,” said Judge Yazmin Barrios, adding that RÃ­os Montt “had knowledge of what was happening and did nothing to stop it”.

The trial was the first time a former head of government has been held to account in Guatemala for the abuses carried out during a 36-year conflict that killed an estimated 200,000 people and led to 45,000 other “disappearances”.

The vast majority of the victims were members of indigenous groups that make up about half of the population.

The verdict was hailed by victims’ groups and human rights organisations as a step towards healing the psychological wounds from one of Latin America’s bloodiest civil wars.

“This is healthy for Guatemala because it helps us free our demons,” said Helen Mack, a businesswoman and prominent human rights activist whose sister, an anthropologist, was killed by the Guatemalan army in 1990.

Pascal Paradis, director of Lawyers Without Borders Canada, which has advised the victims’ lawyers throughout the case, said the fact the trial happened at all was a big achievement.

“It was quite a feat to get past the amnesty law that was passed when Guatemala signed a peace deal in 1996 to end its 36-year war. Impunity is no longer the rule,” he said.

Others said the jailing of the 86-year-old was not enough, given the suffering of the victims.

“What I want is for RÃ­os to feel the pain we felt,” said Elena de Paz Santiago, who was 12 when she and her mother fled a massacre in their village in 1982.

They hid in the mountains and survived by eating roots and wild plants for months, before being caught and taken to an army outpost to cook and clean for the soldiers. Her mother died while they were both being gang-raped and was later buried in a mass grave.

“He [Rios Montt] will go to jail but he will have food. We nearly starved hiding out in the mountains,” she said in an interview outside the courtroom.

The legal battle is also far from over and RÃ­os Montt is expected to appeal.

“We still have a long way to go,” said Edwin Canil, a legal adviser to the victims who helped build the case against Rios Montt and is himself a survivor of a massacre in 1982.

The defence team challenged the validity of the trial throughout the three weeks of hearings.

Zury Rios, the former dictator’s daughter, complained of the “legal mismanagement” of the trial by the three-judge panel and what she called the “arbitrary form” in which it was conducted.