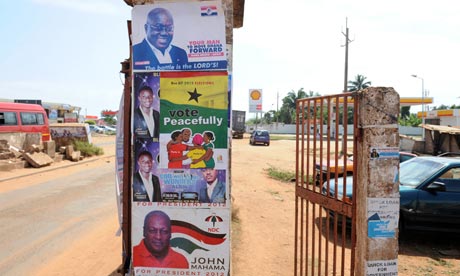 For months, every available space on the streets of Ghana‘s capital city has been plastered with campaign posters as the eight presidential hopefuls in this month’s elections jostle for prominence. But amid the slogans, a new theme has emerged: a plethora of concerts, conferences and prayer meetings organised to promote peace at the polls.

The Let Peace Rain gospel event, the One Ghana Peace gig, the Avoiding Conflict and Mayhem concert and the Peace Song compilation album are a few of the options in what some say has become a “peace industry”.

Ghana has good reason to celebrate peace, with five elections and two peaceful transitions of power since military dictatorship ended two decades ago, making it one of few countries in west Africa to hold elections without violence or the threat of civil war.

Analysts say that the election on 7 Decemberwill be one of the most closely fought in recent history. At stake is access to unprecedented financial resources in the newly oil-exporting state, complicated by the sudden death in July of President John Atta Mills â€“ who had been preparing to contest the election as leader of the ruling National Democratic party (NDP).

“The stakes are very high in these elections,” said Samuel Yaw Antwi of the Ghana Pentecostal and Charismatic Council, which has campaigned for peace at the polls. “We are in a new era after the passing of our president, Atta Mills, and that has made the dynamics a bit different from previous elections.”

Kissy Agyeman-Togobo, from the risk analysts Songhai Advisory, said the prospect of oil revenues had affected the race. “In this term we will see a lot more oil revenue coming into Ghana, and an opportunity to spend big,” she said. “This government has already incurred more debt more than all governments since independence put together and now there is fierce competition over the bread-and-butter issues: power outages, corruption scandals, and the electorate’s impression of huge division between governed and the governing. The question is whether any government will be able to make changes with the money coming in.”

Despite Ghana’s reputation for peaceful transitions, previous elections have come dangerously close to violence. During the last polls in 2008, there were reports of some clashes in the northern region, where politics has become embroiled with long-standing chieftaincy disputes, as well as reports of double voting, vote rigging and other malpractice leading to a number of arrests.

“Voter fraud used to be a big problem in Ghana,” said Christian Owusu Parry of the Ghana electoral commission. “In this election we have introduced biometric verification and special devices to prevent impersonation and multiple voting. If we can cut out these two worrying issues, people will have more confidence in the process and it will bring down tension considerably.”

“These extra numbers will be crucial,” said a senior police source, who did not want to be named. “Up to now it’s been extraordinarily quiet. But the threat will come afterwards if one party feels they have been hard done by. But the leading parties both have their macho people which has always been a source for potential flare-ups.”

There are concerns that “macho men”, as they are known in Ghana, or party strongmen who have played a vigilante role in previous elections, will become involved. Last week, a group of bodybuilders in the upper east region of Ghana denounced pressure from politicians to co-opt them for political ends, posing for cameras with posters promoting “unity and love”.

But there have been other allegations of party strongmen intimidating opposing party supporters. “Over the past few weeks there has been a lot of vitriol,” said Agyeman-Togobo. “The flagbearers from all of the major parties have tried to dissociate themselves from violence, and encouraged supporters not to incite. But at the same time recent examples of strongmen trying to attack rival parties fly in the face of the preaching ofÂ peace.”

She added: ” When you look at the party manifestos, there is not that much that divides the parties, and sometimes it seems as if they are resorting to reckless measures. The two main parties have exploited divisions between different ethnic groups in the past, and Ghanaian politics still has a lot to do with ethnicity â€“ you can’t deny it.”

There are signs, however, that ethnic voting â€“ particularly between the ruling NDP and the main opposition party, the New Patriotic party â€“ is waning in Ghana, prompting suggestions that the country is becoming a more mature democracy.

“In the past you would find discussions on radio between rival politicians degenerated into fistfights and so on,” said Jean Mensa, executive director of Ghana’s Institute of Economic Affairs, who organised a series of televised debates for four of the eight presidential candidates in the coming elections. “But now people are beginning to understand that parties go and come.

“If you sit in the taxis and go to the marketplace everybody knows what is happening,” Mensa added. “Thanks to the local radio stations you can ask an ordinary woman on the street what each party represents and what each party promises and they will be able to tell you.”

She said the peace concerts and gatherings had raised awareness about the importance of democratic transition in the country.

“I don’t know whether peace concerts themselves help to promote peace, but anything that makes people aware of the negative impact election violence has had in other African countries does help,” said Mensa.

“A lot of good work has been done in the runup to this election to ensure peace. It shifts the campaign away from the personality attacks and the insults. That alone helps to lessen the tension.”