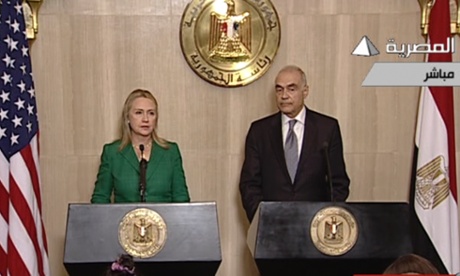 US secretary of state Hillary Clinton and Egyptian foreign minister Mohamed Kamel Amr announce a truce between Israel and Hamas.

Israel and the Palestinians have bowed to US and international pressure and agreed an end to eight days of fighting in the Gaza Strip that has claimed more than 160 lives.

Under the truce, which came into force at 9pm local time (7pm GMT) and will be guaranteed by Egypt on the Palestinian side, Israel agreed to “stop all hostilities in the Gaza Strip by land, sea and air including incursions and targeting of individuals”. In exchange it committed “all Palestinian factions” to “stop all hostilities from the Gaza Strip against Israel including rocket attacks and all attacks along the border”.

Leaders on both sides were quick to claim victory. Khaled Meshaal, the exiled leader of Hamas, which governs the Gaza Strip, said at a press conference in Cairo that Israel had “failed in its adventure” when it launched attacks on Gaza and had been forced to accept Palestinian terms.

Israeli operations and Hamas missile fire continued right up to the deadline, claiming at least one further Palestinian fatality, a member of Islamic Jihad.

Israeli drones were continuing to fly overhead after the ceasefire had come into effect. Celebratory gunfire rang out across Gaza.

The truce â€“ announced in Cairo by Egypt’s foreign minister, Mohamed Kamel Amr, and the US secretary of state, Hillary Clinton â€“ also included a pledge to open border crossings.

That could ease the five-year blockade of the coastal enclave, a key point that is certain to be the focus of differing interpretations as the dust settles.

But even as the truce was being announced, Netanyahu was warning more “forceful” action might be required if the ceasefire failed â€“ a reference to a threatened ground invasion of Gaza that was postponed by Israel after pressure from the US president, Barack Obama.

Speaking at a press conference, Netanyahu said the operation had destroyed “thousands of missiles” as well as Hamas installations. Israel could not “sit with their arms folded” under attack, he said.

He also repeated his veiled threat of a wider army operation if the ceasefire failed: “I know there are citizens expecting a more severe military action, and perhaps we shall need to do so.”

Netanyahu’s statement came as an instant poll by Israel’s Channel 2 television revealed that 70% of Israelis opposed the ceasefire deal.

Meshaal, speaking in Cairo, welcomed the ceasefire and said “the Israeli conspiracy” that had sought election propaganda and to “test Egypt” had “failed in its objectives”.

After the deal was struck Obama called Netanyahu to commend him for agreeing to the Egyptian proposal and told him he would seek more money for the Iron Dome defence system that has protected Israel from rocket attacks.

Earlier in the day rumours had been circulating that Israel had been planning to announce a unilateral ceasefire that would be followed by Hamas doing the same thing. Israel launched well over 1,500 air strikes and other attacks on targets in Gaza, while more than 1,000 rockets pounded Israel after the fighting began on 14 November.

The conflict has claimed the lives of at least 161 Palestinians, including dozens of civilians, while five Israelis died.

Announcing the ceasefire in Cairo, Clinton commended Egypt’s mediation. “This is a critical moment for the region. Egypt’s new government is assuming the responsibility and leadership that has long made this country a cornerstone for regional stability and peace.”

She also thanked Egypt’s Islamist president, Mohamed Morsi, for his mediation efforts and pledged to work with partners in the region “to consolidate this progress, improve conditions for the people of Gaza, and provide security for the people of Israel”.

The British foreign secretary, William Hague, welcomed the deal as “an important step towards a lasting peace”.

He added: “The priority now must be to build on the ceasefire and to address the underlying causes of the conflict, including more open access to and from Gaza for trade as well as humanitarian assistance, and an end to the smuggling of weapons.”

Despite securing support from western governments for its initial military operation against Hamas, Israel had failed to win US and European backing for a ground invasion as a series of key US allies in the region, led by Egypt and Turkey, strongly protested against the Israeli assault.

Clinton had been engaged in talks with Netanyahu in Jerusalem and Palestinian Authority president Mahmoud Abbas in Ramallah before flying to Cairo to meet Morsi. Obama also intervened during a tour of Asia to call both Israel and Morsi to encourage them to find a solution, as well as making several calls to Netanyahu and Morsi.

The deal as it stands â€“ despite comments by Clinton that efforts would continue for a wider settlement â€“ leaves considerable areas of friction and uncertainty.

However, an Israeli government source said, following the ceasefire agreement, an “ongoing dialogue will start within 24 hours” covering underlying issues of concern to both parties.

They include the further relaxation of border restrictions and the issue of targeted assassinations.

On borders, he said: “These restrictions were imposed in the framework of hostilities.” In the absence of hostilities, they may no longer be necessary. Targeted assassinations, he added, were “an irrelevant question”. “If they are not attacking us, we don’t need to shoot them.”

Two other issues to be discussed in further talks were the rearming of militant groups and the Israeli-imposed buffer zone inside the Gaza border. The source said: “The buffer zone was only introduced in the framework of hostilities.”

An earlier attempt to reach a truce 24 hours earlier, which had envisaged a lull in hostilities leading to wider negotiations over key issues, including a lifting of the Israeli blockade of the coastal strip, fell apart because of internal opposition on both sides.

The last week of violence has seen Egypt’s Muslim Brotherhood-led government emerge as a key force in a region transformed by the Arab spring.

The agreement emerged despite a bus bombing in Tel Aviv that injured 15 Israelis close to the country’s defence ministry.

Israeli police quickly said it was a terrorist incident, immediately awakening fears of a return to the sort of violence associated with the period of the second Palestinian intifada or uprising, in which some 1,000 Israelis and 5,000 Palestinians were killed.

No one claimed responsibility for the attack. A Hamas spokesman, Fawzi Barhoum, called it “a natural response to crimes of the occupation and the ongoing massacres against civilians in Gaza”.