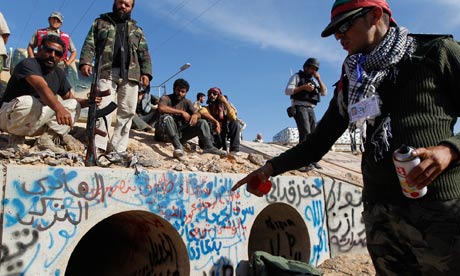 An anti-Gaddafi fighter points at the drain where Muammar Gaddafi was hiding before he was captured in Sirte on 20 October 2011. Photograph: Thaier al-Sudani/Reuters

Moustafa Zoubi trained his battered Kalashnikov on a large storm water pipe, his gun barrel darting between the shadow at its entrance and a frantic commotion on the ridge above. Fighters were scrambling in every direction, shouting commands and barking orders for reinforcements into their mobile phones. One radio call in particular was repeatedly shouted: “Call sign one.”

Some of the frantic men nearby took cover behind a grass berm, looking towards an area past a twisted and smouldering convoy of cars and trucks for the source of the incoming gunfire. Others made for nearby buildings. All the time, gungho men in war-ravaged trucks were arriving, tyres squealing on the hot black bitumen as they neared the maelstrom on the outskirts of the Libyan city of Sirte.

The recent arrivals were turning up with news urgently passed on to them in phone calls from their colleagues as far away as Misrata and Tripoli. The man they had all been hunting was cowering in the foul-smelling hole in front of them.

Captives from the firefight still raging around them had given up their boss, the new arrivals were told. He had nowhere left to run.

Zoubi’s heart seemed to pound through his chest as he focused his Kalashnikov and every bit of concentration he could summon on the shadow in front of him. The gunfire crackling in the distance no longer mattered. Along with everyone else, he was focused solely on the momentous drama that was about to play out.

A hand tentatively emerged from the drainpipe. Seconds later another slowly appeared from the shadow into the midday light. One hand briefly dropped to the ground, and the men outside responded with screamed orders. “Keep coming,” someone said. Someone else fired into the air.

A man’s head appeared from the gloom â€“ sporting a signature black curly mass of hair.

The rebels surged forward and grabbed the man by the arms, pulling him clear of the pipe and hauling him to his feet. One pulled his hair back, forcing his face to lurch violently towards the sunlight.

“Muammar! Muammar!” one of the rebels screamed.

“What’s this?” asked one of modern history’s most infamous tyrants. “What’s this, my sons? What are you doing?”

Colonel Muammar Gaddafi, wearing matching tan pants and shirt, by now soaked in blood, stopped briefly and looked around, seemingly bewildered. He had little more than a few seconds to take in his surroundings before being grabbed by each arm and wrenched away from his final, ignominious refuge.

The self-anointed Godfather of Libya, King of Kings of Africa, and Leader Who Lived in All Libyans’ Hearts, looked unsteady on his feet as he was led away, his hair unkempt, wild and partly matted in his own blood, and his legs trembling with each step.

A mob grew around Gaddafi as he was frog-marched through the sand. While he was being taken towards a group of rebel trucks, one fighter crouched in the dirt behind the frightened captive and sodomised him with a bayonet.

“Haram alaikum!” screamed Gaddafi, his voice hoarse and his eyes darting wildly. Loosely translated: “It’s a sin what you are doing!”

Blood from the vanquished leader’s various wounds was now caking his shirt. Blows rained down on him. Every one of his captors seemed to want a piece of the hobbled tyrant. Things were slipping fast out of control.

Rebels from everywhere were converging on this industrial area outside Sirte, a city that had become associated with his rule. The rebels held their telephones forward like candles, filming every move of the increasingly desperate and terrified 69-year-old. Gaddafi was thrown on to the front of a white car bonnet, his bloodsoaked head locked between the knees of a militiaman from nearby Misrata.

He slipped off the bonnet, his ravaged body unable to cope with the constant battering. The militiaman hauled him back up.

Around this time, someone filmed the gruesome shot of what seemed to be a mortally wounded Gaddafi, an image that would quickly be broadcast worldwide.

From this point, none of the dozens who were recording the scene seemed able to hold their mobile phones steady. Torn between wanting to watch things unfold with their own eyes and recording for posterity the momentous scenes playing out on what would be a famous day â€“ 20 October 2011 â€“ the men surrounding Gaddafi all seemed to choose the former.

Adam Zawbi, a 20-year-old Misrata fighter, saw what happened next. “I had just got there,” he said. “We got a call that Gaddafi was captured and we went straight to the area. There were lots of guys shouting and Gaddafi was in the centre of the road. I saw the gun. I saw the hand holding it and I heard it fire.”

“I know who did it,” he later said, as we drove between the central Libyan coastal city of Zlitan and his home city of Misrata. “I know his first name anyway.” I got the impression that the young medic, by then a veteran of eight grinding months of frontline warfare, knew a lot more than he was letting on.