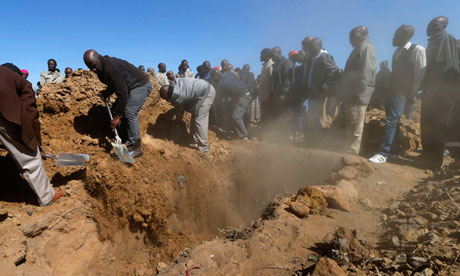 Fears over violent unrest spreading in South Africa‘s mining industry grew on Monday after a police shooting at a gold mine left four workers in hospital, including one critically injured.

The incident came as the first group of miners was released from custody following the Lonmin platinum mine massacre, in which police gunned down 34 of their colleagues.

Rubber bullets and tear gas were used against about 60 mineworkers at the Gold One mine at Modder East near Johannesburg. Police said they were trying to disperse a group of about 200 sacked mineworkers who were attacking reinstated colleagues.

Gold One said an illegal blockade began at around 6.30am, preventing about half of its employees from returning to work. “The group did not present any memorandum of demands,” a spokesman said. “The group blocked all access in and out of the mine and threw stones at vehicles attempting to gain access to the operations.

“The South African Police Service (SAPS) addressed the group extensively, informing them that the gathering was illegal and requesting them to disperse. The group refused. At approximately 11.30am the SAPS had to use teargas and rubber bullets to disperse the group. Access to the Modder East Operations has since been re-established.”

Captain Pinky Tsinyane, a police spokeswoman, said four people had been taken to hospital, one of whom was critically injured.

As South Africa still comes to terms with what has been described as the lowest point since the end of racial apartheid, anxiety over contagion in the mining sector has been compounded by a wildcat strike by 12,500 miners at Gold Fields’ Kloof Driefontein Complex gold mine.

Frans Baleni, general secretary of the National Union of Mineworkers, told South Africa’s Business Day newspaper:: “The issues at Marikana are overflowing. It’s quite clear that this wave of new developments on the platinum mines is coming down on us at the gold mines.”

Opposition accused the government of failing to tackle the wider crisis. Sej Motau, shadow labour minister for the Democratic Alliance, said: “Labour unrest has been spreading across the mining sector following the tragedy at Lonmin’s Marikana mine.”

“By focusing all her efforts on establishing a peace accord at Lonmin’s Marikana mine, the minister [Mildred Oliphant] is simply reacting to the most immediate symptoms of an underlying dysfunctional labour regime.”

As the government, unions and British-owned Lonmin resumed talks on the “peace accord”, the first group of 42 miners was released after the dropping of fiercely controversial murder charges against them. The jubilant men, released on warning with no need for bail, sang apartheid-era struggle songs and said they were eager to get home to their families.

The workers were among 270 arrested for public violence last month after the police opened fire on a group of protesters, killing 34 of them and wounding 78.

Debate over what happened on the day of the massacre continues to rage. Greg Marinovich, a Pulitzer prize-winning photojournalist, has published an investigation suggesting that 14 workers died some 300m away from the main site of the bloodshed. Some appeared to have been shot at close range, he argues.

“It is becoming clear to this reporter that heavily armed police hunted down and killed the miners in cold blood,” he wrote on the Daily Maverick. website. “A minority were killed in the filmed event where police claim they acted in self-defence. The rest was murder on a massive scale.”

In another report published on Monday, Marinovich claimed that individuals close to various arms of the official investigation have approached the Daily Maverick, verifying the main thrust of his argument.

Police are also facing allegations that arrested miners were tortured in custody. On Monday officials announced that a preliminary report from the Independent Police Investigative Directorate had been handed to police minister Nathi Mthethwa.

“Government is concerned about allegations of torture and ill-treatment of detainees arrested in connection with the Marikana incident,” said Collins Chabane, minister in the presidency.

“The investigation is ongoing and the minister will receive a final report with recommendations as soon as it is finalised. The minister has accordingly assured the public that should the investigation point out to any violation of the detainees by any police officer; the full might of the law will take its course.”

Chabane, who chairs the inter-ministerial committee dealing with the aftermath of the Marikana massacre, also sought to reassure foreign investors that South Africa is not in disarray.

“The tragic incident at Marikana is not a reflection of the business environment in South Africa,” he said. “Government remains in control of the situation and law and order continues to prevail.”

A group of civil society organisations â€“ including Amnesty International, the Centre for the Study of Violence and Reconciliation, Section 27 and the Marikana Solidarity Campaign â€“ described the Marikana massacre as “a defining moment in our history and cannot be allowed to pass without establishing the full truth, ensuring justice and providing redress for the victims and their families.”

It added: “We are outraged by the emerging evidence of targeted killings at Marikana. The Marikana massacre and the subsequent callous responses of both Lonmin and several representatives of the state violate the very spirit of our constitution.”