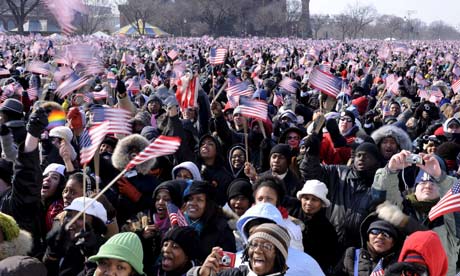 Call them the believers. The three people who gathered at a Pittsburgh cafe on a sunny morning last month weren’t merely supporters of Barack Obama back in 2008 â€“ they were investors in him, full of hope for what his presidency might deliver.

Iraqi war veteran Helen Gerhardt got to meet the then-candidate, and bend his ear about the Middle East. Her election day was spent driving African-Americans to polling stations: “We had the music up, and we were partying all the way there. It was one of the biggest highs of my life.”

Rosemary Trump and Dan Beeton went to the presidential inauguration in January 2009. They make it sound like a cross between an outdoor rock concert and a particularly weepy wedding: 1.8Â million strangers tearfully hugging each other on the Mall. Trump petitioned her congressman for tickets; trekked to her sister’s place in Maryland; stayed out late at a ball the night before; got up at 4am to schlep into Washington; legged over security barriers to get nearer the action and remained on her feet till 7pm. Trump is 64.

Beeton remembers peering at a giant screen showing Bush and Cheney: “I thought: ‘At last, they’re gone!'” Trump bursts into Happy Days Are Here Again and asks: “How would you ever duplicate that moment?”

Ask how enthusiastic they feel this time and the responses are far more muted. Former Democrat campaigner Gerhardt is furious: “I can’t tell you how betrayed I feel. The people on Wall Street who have wrecked our economy have been let off the hook, while if you’re caught with a gram of marijuana you’re sent to jail.”

What about Reagan’s famous question: are you personally better off now than you were four years ago? A pensioner, Trump frets about how younger members of her family will fare in the jobs market. Beeton mentions his partner, Amy, and how her business as a professional fundraiser has got tougher. Such anxieties are perhaps the common currency of life amid a slump, but Gerhardt’s story gives some idea of just what devastation this one has caused.

Finishing a postgraduate degree, she left the University of Pittsburgh last summer loaded down with student debt and unable to land anything more than a part-time job. For much of this year, she slept in her car. A badly dented Chevy parked around the corner from work served as her address until just over a month ago, when family took over the loans and a friend put her up in an attic.

Obama is the very definition of a crisis leader, winning an election just weeks after the collapse of Lehman Brothers and George Bush’s panicky warning that “this sucker could go down”. His job was to sort out the crisis. There’s just one problem with that: crises have many causes and symptoms â€“ which should the president focus on? Even as Obama was taking the oath of office, the economy’s freefall was accelerating â€“ so that by October of his first year, one in 10 workers was out of a job. Beyond that were a whole host of other crises: the bombed-out housing market, the out-of-control finance sector, the dependence on imported fossil fuels.

Then there was the economic model which many, including researchers at the IMF , argue gave rise to the subprime crisis: a country in which cheap credit had substituted for real improvements in workers’ pay and conditions. Obama believers would have put fixing that one near the top of their list.

There was never a hope in hell that the Crisis President could accomplish all of those. What dismays activists and economists alike is how little progress he has made: the big banks remain supersized, the housing market has largely been left to heal itself. Nearly four years later, the best that can be said is that he’s overseen an agonisingly slow recovery.

This is still better than Britain, which is stuck on the world economy’s hard shoulder. America’s jobless rate now stands at 7.8% â€“ below the UK’s 8.1%. And while the UK’s annual national income is still about 5% below its 2008 level, the US has made back all its lost GDP â€“ and then some.

Yet even the $1.25tn spent over the years by the Democrats on tax cuts, infrastructure spending and social security (not to mention the hundreds of billions pumped into the markets by the US central bank) has not been big enough, given the size of the black hole. As Mark Zandi, chief economist of Moody’s Analytics, says: “Government stimulus has allowed us to motor out of a depression, but it’s not been enough for the economy to achieve real velocity.”

This leaves much of Obama’s base no richer. Strip out inflation, and wages for the typical American worker are pretty much the same as they were five years ago; indeed, they’ve barely risen since the dotcom bubble burst. Whether Reagan or Clinton or the second Bush, the trend in recent presidential elections has been for incumbents to be re-elected. Yet according to the pollsters at Pew, the dismal consumer confidence figures notched up under Obama this year are easily as low as those of Jimmy Carter and George Bush Sr when they went for re-election â€“ and lost.

“With an economy as bad as this, Obama would normally lose the election,” says Dean Baker at the Center for Economic and Policy Research. “And were he facing anyone less useless than Romney â€“ Reagan, Dubya, anyone â€“ he almost certainly would lose.”

A tale of two bridges

Even that judgment isn’t as harsh as the one delivered by Jim Ferlo, the Pennsylvania state senator covering most of Pittsburgh and an early supporter of Obama in his battle for the Democrat nomination. “Before you ask, I’ve already given my campaign contribution,” he announces. “It was a cheque for two cents.”

With the cheque (which Obama’s team cashed), Ferlo sent a letter giving his two-cents-worth, accusing his former ally of “flip-flopping” on everything from healthcare to the suspension of habeas corpus. Then there’s the cash from the stimulus package: “The White House made getting that money so bureaucratic and cumbersome.”

What irked him most was something most Beltway analysts barely talk about: the administration’s insistence on projects being “shovel-ready”, with paperwork already settled in order to qualify for the stimulus cash. To prove the cost of that, Ferlo shows me two bridges a short drive from his office.

One was built with Obama’s dollars: a dinky footbridge that enables Pittsburgh’s “granola heads” to walk over to a branch of the ultra-expensive Whole Foods. A small job, it was ready to go when the Recovery Act (the economic stimulus package) landed in 2009. Two minutes up the road is a bigger vehicular bridge that’s “unsafe at any speed”. Rebuilding that would have created more work and been far more useful, but the Is and Ts were not dotted and crossed in time. By Ferlo’s account, there are several thousand failed bridges, locks and dams across Pennsylvania that could have benefited from Obama money.

The curious thing about all this grumbling is how out of place it seems in Pittsburgh, which appears to be that rare thing: a city that has found a post-industrial afterlife, suffering much less from unemployment than the country as a whole. What was a steel town as recently as the 80s is now dominated by “eds and meds”: universities and healthcare.

Involved in local politics for over a quarter of a century, Ferlo can take as much credit for this turnaround as anyone else. But in his complaints about the lack of good blue collar jobs and grumbling about free trade, he fits the profile of so many Obama believers, who wanted his leader to do more than just keep a broken system upright.

Just after the 2008 election, TIME put Obama on its front cover, digitally manipulated to look like America’s last great crisis leader, Franklin Roosevelt. “The New New Deal” read the strapline, referring to FDR’s reshaping of the economy. This mood infected the incoming team.

In The Escape Artists: How Obama’s Team Fumbled the Recovery, Noam Scheiber recounts an early conversation between the president-elect and Tim Geithner, his chosen Treasury secretary. “Your signature accomplishment is going to be averting a Great Depression,” Geithner tells Obama. His new boss replies: “That’s not enough for me.”

This election campaign has been much more focused on this or that gaffe and these or those figures than on such political dreaminess. The disenchantment is evident not just in the sourness of the campaign rhetoric, but also in how putative voters describe their choices. Across town from Ferlo’s office, at Carnegie Mellon University, I asked a class of first-year undergraduates how they would vote. The majority plumped for Obama, but with no great zeal.

“People were more enthusiastic last time around,” noted Myles Blodnick, listlessly. “They used a lot of buzzwords.” What worried the class more was the debt they were getting into to fund their degrees â€“ in Blodnick’s case $20,000 just to start his first term. Nor will they necessarily earn the money to pay it all back.

At the Tin Front Cafe, I spoke to Mike and Steffi Stout and their 23-year-old daughter, Maura. The parents had also been to the inauguration (“It was like a new world opened up; just for an afternoon,” said Steffi), and could list ways in which the Obama administration had helped them keep their printers’ business afloat. What worried them far more was what lay ahead for Maura, just a couple of years out of college.

“Maybe four people out of my class have got good jobs,” reckoned Maura. By class, she meant her entire year’s intake of 500 graduates. Her former roommates worked in fast-fashion shops, “and they got really good grades”; her graduate husband, Mike, had still not got a job so worked in his dad’s construction business.

Maura had recently got a new post, looking after accounts at a downtown hotel. The advertised pay was $13 an hour, but the manager added a dollar an hour “so you can tell your mother you got a dollar for going to college”. That made $14 an hour, which her father calculated was the same as he earned as a steel worker in 1978 â€“ and that’s without adding four decades of inflation.

In his inauguration address, Obama told Trump and Beeton and the Stouts and hundreds of thousands of others that a nation couldn’t prosper long “when it favours only the prosperous”.

Such optimism wasn’t for Maura: “I don’t think I’m ever going to earn as much as my parents. I don’t think my husband and I will ever have the same life as they did.”