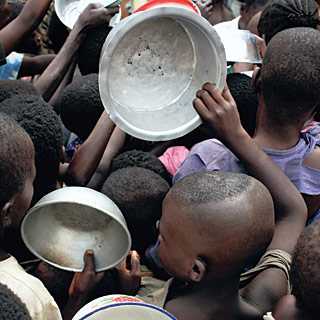 By 2050, the world’s population will have reached 9 billion. If all these people are going to have enough to eat, increases in food production and changes in consumer patterns of behaviour will both be needed. But what will these look like? And what’s the best way to make them happen?

There’s no one “right” model for farming. Farmers need to respond to local conditions, argued Louise Fresco of the University of Amsterdam. “Farmers and business should liaise with communities to orient â€¦ production”, she pointed out. By the same token, farmers have a lot to learn from one another. Knowledge gaps are especially significant in the developing world, where tomorrow’s hungry mouths will mostly be found. Why are rice yields so much lower in India than China, for example? So there’s a strong case for sharing best practices. Yet warnings were voiced against imposing outside recommendations wholesale. As debate participant Robynne Anderson observed: “scaling up in a farmer context is often best done through farmer organisations and extension services.”

Okay, so it might not sound like the most thrilling solution, but data matters. We can’t analyse the problem without the right numbers. DuPont’s Dawn Rittenhouse pointed towards a US programme called Field to Market that has devised comparable outcome metrics for agricultural improvement projects. Woolworths is rolling out a similar approach across its agriculture suppliers. Farming for the Future operates within an 80-point audit protocol based on soil health. It’s proven effective at “reducing inputs, driving water efficiency, protecting biodiversity and maintaining or even growing yields”, Justin Smith remarked. A word of caution, however: adding to producers’ paperwork won’t be welcomed down on the farm. There’s a multitude of certification schemes out there already: Tesco Nurture, Leaf, Organic, Freedom Food, and so forth. “Too many standards, too many questions to farmers”, noted Unilever’s Jan Kees Vis. Better to have one harmonised standard â€“ albeit it’s difficult to draw up.

Keeping it local â€“ or not

The trope of our times – Think global, Act local â€“ drew mixed responses. Received wisdom is that food miles are bad news. If we need to feed the world, we need to grow what we need on our doorsteps. Yet analysis by Unilever suggests only 2-3% of the global carbon footprint of your average food product comes from transport. WWF’s Perkins conceded that the case for going local isn’t as easy as it sounds. Sure, we want to avoid air-freighting food around the globe, but we also don’t want to be growing carbon-heavy, out-of-season greenhouse crops just so that they are local. Instead, he suggested that it made sense to “grow things where they grow best â€¦ and trade them”.

Feeding 9 billion people by 2050 doesn’t necessarily mean a revolution in agricultural productivity. Simply stopping waste in the food chain will get us a good way towards where we need to be. There’s much to be done at the producer end, particularly with respect to post-harvest loses. DuPont’s Dawn Rittenhouse cites the example of dairy farming in Kenya. Her company co-developed a new enzyme that slowed the spoilage of milk, thus preserving milk during transportation from the farm. Information technology can also play a role. Participants cited IT innovations like #phones4farmers and iCow. Not all solutions need be high tech. Grain farmer Santiago del Solar noted how producers in his home country use huge plastic storage bags to make up for missing silos. “It’s an Argentinean solution”, he said, “cheap and clean”.

Reducing waste at the other end of the food cycle is equally important. Unilever’s Jan Kees Vis argued that food should be affordable, not cheap, as “cheap food leads to waste”. Business has a key role to play here. The new UK Hospitality and Food Service Agreement offers a prime example of an industry sector linking with government and non-profits to tackle the problem. Getting consumers to think about food use is the primary concern, however. That requires food retailers to get involved. “I guess our role is also to focus on not promoting bulk purchases where this is unnecessary”, said Woolworth’s Justin Smith. Discounting “normal” sized portions could be one solution. Information on production methods is also helpful, said Louise Fresco, but only if it’s easy to understand.

Food security is an issue that today’s young people will become only too aware of. So engage them now in sustainable consumption, the panel agreed. On the consumer side, several participants called for more work in schools. UK supermarket Sainsbury’s was cited for its work promoting gardening in schools. Don’t forget tomorrow’s farmers either. Young people need to be persuaded that farming can provide a viable future. For that to happen, it requires them to have the skills to farm efficiently, as well as the incentive of being paid fairly. Companies can contribute in both cases.

If there was one message that rang our throughout the discussion, it was the need for collaboration. “For emerging market businesses, much of the focus needs to be on creating partnership opportunities that bring more small scale farmers”, said Justin Smith. Matching small-scale suppliers with well-resourced primary suppliers is the kind of solution he had in mind. Jan Kees Vis had a word for the big players too: cooperation, not competition, has to be the watchword going forward. It’s time to reaffirm sustainable agriculture as a “pre-competitive issue”, he said. The time is also right to start “re-connecting” in supply chains: e.g. linking end users to primary producers. “I have taken Unilever Board members to tea estates in Africa, to oil palm plantations in Malaysia, to tomato farms in Italy … [This is] a necessary step to get to more collaboration.”

To see the full programme of discussions, please click here, and to register for reminders, please complete the form below.