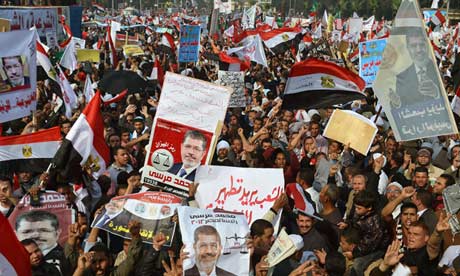 President puts faith in popular vote to silence critics of government’s sweeping powers as about 50,000 rally in Cairo

gyptian President Mohamed Morsihas announced a snap referendum on a new constitution that has already deepened divisions in a country still struggling to find its identity more than a year after it emerged from Hosni Mubarak’s rule.

Morsi, who has triggered a fresh crisis in Egypt by assuming sweeping powers and pushing the constitution through an Islamist-dominated assembly, called the 15 December vote after tens of thousands of his loyalists rallied in support of the document.

Opposition leaders have condemned the constitution, saying its basis in Islamic laws could undermine women’s rights and freedom of speech. Mohamed ElBaradei called it a violation of universal values and vowed that the struggle against Morsi’s Muslim Brotherhood would continue.

Earlier, an estimated 50,000 people congregated near Cairo University, many bussed in from the countryside to show their support for the president and sharia law. Members of the president’s Muslim Brotherhood were joined by large numbers of their Salfi Muslim allies.

Morsi’s decree and the resulting furore has repolarised Egyptian politics and society. Opposition forces immediately took to the streets to decry what they termed a dictatorial power grab, which granted Morsi judicial immunity in all decisions and ringfenced the assembly given the task of drafting the constitution.

Morsi has insisted that the measures are temporary and will speed Egypt’s democratic transition.

However, by giving himself extensive powers and putting his decisions beyond judicial challenge he has pushed the country into fresh turmoil. His assertion of authority in a decree issued the day after he won world praise for brokering a Gaza truce between Israel and the Palestinian Islamist Hamas movement dismayed his opponents.

Saturday was the first showing of Islamist forces since the uproar began after they cancelled a demonstration last Tuesday because it coincided with opposition forces marching on Tahrir Square. Initially Saturday’s protest was scheduled for Tahrir Square, but was relocated to Cairo University to avoid opposition protesters who were continuing a sit-in.

In an effort to defuse the crisis, and also avoid possible dissolution by a supreme court ruling due on Sunday, the drafting assembly rushed to finish in time for Morsi to ratify it and call the referendum. The final draft drew criticism at home and abroad for its ambiguous language, its weak and contradictory articles on human rights, women’s rights and civil liberties, and for the creeping sense of religiosity. The assembly was also criticised for its homogeneous nature after liberal and Christian members withdrew.

“We fundamentally reject the referendum and constituent assembly because the assembly does not represent all sections of society,” said Sayed el-Erian, 43, a protester and member of a party set up by ElBaradei.

Privately owned media announced a press blackout on Tuesday and Wednesday in protest. Morsi’s unilateral actions and refusal to back down have dismayed secular opposition forces, who are adamant that he must rescind these powers before a solution can be discussed.

“Morsi’s actions display a lack of wisdom,” said university professor Mustafa Kamel el-Sayed, who withdrew from the assembly drafting the constitution because of the Islamist domination of the group.

“The head of state should try to promote national reconciliation. And by insisting on a course of action which is rejected by a considerable number of Egyptians, the president is basing his power exclusively on one political force, marginalising all others.”

However, Sayed Sabah Abdallah, a member of the Brotherhood’s political arm, the Freedom and Justice party, who was present at the pro-Morsi rally, laid the blame of the current crisis squarely at the door of the secular opposition.

“The forces in Tahrir want to bring down this constitution because they know we are the biggest organisational force in the country and that we would sweep the parliamentary elections that must be held right after the constitution is passed in the referendum,” he said.