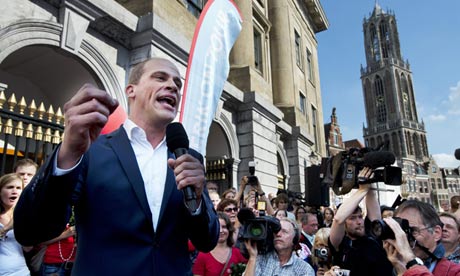 A year from retirement after decades working in a bank, Ger Coolan is contemplating the unlikeliest switch in his political conduct ever â€“ voting for a bunch of former Maoists.

When the Dutch go to the polls on Wednesday in an early election seen across Europe as a bellwether ballot, the well-to-do, middle-class 64-year-old will embody the extreme volatility surrounding the vote.

“You’ve got the Germans bossing us around. Taxes are going to go up, pensions are going to be cut. And all this because of Europe. It would be much better just to let Greece leave the euro and carry on with the strong countries,” he said. “The Socialists are much better for the common people.”

The Socialists, who have renounced their 1970s Maoism and have never been in government, look poised to double their seats in the crunch election by campaigning against Europe and the austerity that has sent governments toppling across the union, including the Netherlands, a successful prosperous core EU member with low unemployment and high quality of life.

Between them, the hard-left Socialists and the far-right Freedom party, united in their hostility to Brussels, their resistance to austerity at home, and their opposition to helping the struggling eurozone countries of the south, look likely to take a third of the 150-seat parliament, shifting the terms of the national debate and complicating the eurozone’s fight to survive.

“It will be a big anti-European bloc,” said Sarah de Lange, an Amsterdam University political scientist. “This campaign is all about Europe. The Netherlands have gone from being the most reliable ally on Europe to very hostile.”

In Maastricht, the small wealthy southern town synonymous with EU integration and best known as the birthplace of the euro 20 years ago, the mood is sour. “I’m voting for Wilders,” said Jo, a cafe owner, referring to the far-right anti-Islam populist, Geert Wilders and his Freedom party. “He’s the only one who talks straight. He was the first to say we should get out of the euro. Now everyone’s saying it.”

While neither the hard left nor the far right are likely to make it into government, their success in shaping the agenda has also forced the mainstream parties, particularly on the centre right, to turn much more Eurosceptic, with the interim prime minister, Mark Rutte, declaring in a TV debate that Greece is not getting another euro of Dutch taxpayers’ money.

Rutte’s centre-right minority coalition collapsed in April because of Europe. Now its fate will be decided by how the voters feel about Europe.

The Rutte government, lined up alongside the Germans, was the most hawkish in preaching austerity to Greece and other eurozone laggards. It was then hoisted on its own petard when it emerged that spending cuts and tax rises worth up to â‚¬16bn would be needed if Holland was to meet its EU-set budget deficit target by next year.

Wilders pulled the plug on the minority government by vetoing welfare cuts, triggering Wednesday’s election. Seen as to blame for bringing down the government, Wilders, who has with some success sought to turn the election into a referendum on Europe (Dutch out), looks to be a loser, forecast to forfeit a quarter of his 24 seats. But analysts point out that Wilders regularly polls less than he actually achieves.

The hard-left Socialists have been the big beneficiary of the turmoil and the extreme unpredictability, although they have gone down in the most recent polls because of the lacklustre performance of its leader, Emile Roemer, in the TV debates.

“The television debates have had a huge impact,” said Paul Nieuwenburg, a politics professor at Leiden University. “The volatility is a reflection of the incoherence of the parties as they scramble for votes. Wilders has wrought havoc by understanding clearly that people are very disaffected with the traditional parties.”

The election is being watched closely in Brussels and across Europe not only for the message a founding EU member sends about the union’s worst-ever crisis, but because Dutch politics are often a reliable gauge of broader European political trends, from the rise of maverick populists a decade ago, to the referendum rejection of a European constitution in 2005.

The sense is that most Dutch remain guardedly pro-EU and in favour of the single currency. But they are deeply reluctant to transfer more budget and fiscal powers to Brussels â€“ the EU elite’s response to the crisis. And they are unhappy with deep spending cuts made quickly to meet EU targets by next year. Such a policy is likely to keep Brussels happy but throw the country into an unnecessary recession, whereas a slower, more phased programme of reforms would do less damage to a fundamentally sound economy.

Reflecting the public mood as well as the pressure from the political extremes, centrist parties, always strongly pro-EU, are now sounding much more ambivalent.

An academic study of the manifestoes and statements of the 12 parties expected to enter the new parliament found only three could be described as unequivocally pro-EU and pro-euro.

Among those three is the mainstream centre-left Dutch Labour party, which was in the doldrums only weeks ago, but has staged a remarkable recovery due to the strong TV performances of its new leader, Diederik Samsom, and is now running neck-and-neck with Rutte’s rightwing liberals, the VVD, at the top of the polls and clawing back support from the hard left.

Pundits predict three months of post-election wrangling over a Labour-VVD coalition that will bicker over the speed, scale, and depth of spending cuts and return the Netherlands to a broadly pro-European path, but with many more ifs and buts.