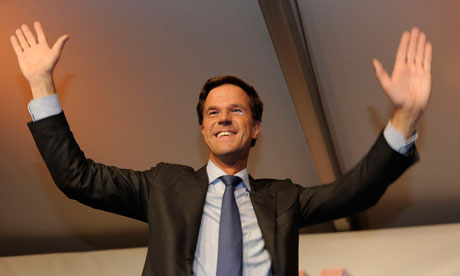 Two Dutch centrist parties were preparing to stitch up a new left-right coalition after securing an absolute parliamentary majority between them in a surprise outcome to Wednesday’s election.

The projected result represented a triumph for the incumbent prime minister, Mark Rutte, head of the VVD rightwing liberals, as well as for the resurgent social democrats of the Dutch Labour party under a new leader, Diederik Samsom.

In the poll, which has been watched closely across Europe because of its potential impact on the euro crisis, Rutte’s VVD took 41 seat to Labour’s 40 in the 150-seat chamber, with both parties gaining 10 seats on the 2010 election. The big losers were the Freedom party, headed by maverick far-right populist Geert Wilders, which slumped from 24 to 13 seats, according to projections, and the Christian Democrats, the traditional powerbrokers of Dutch politics, who collapsed from 21 to 13 seats.

Months of coalition wrangling are now likely over attempts to finesse an accord over austerity, spending cuts, Europe and the single currency crisis â€“ the issues that shaped the campaign.

A coalition would muster a comfortable two-party majority, unusual in recent Dutch politics, and could count on the support of the centrist pro-European D-66 which increased its seats from 10 to 12, according to projections.

The hard left socialist party, leading overall in the polls until a fortnight ago, remained level on 2010 with 15 seats in an outcome that showed voters closing ranks to reject explicitly anti-European campaigners.

The VVD and Labour party leaders can lay fair claim to remarkable victories â€“ Rutte’s success is a rare case of an incumbent winning re-election in the midst of the euro crisis and Samsom, after only a few months as Labour leader, has hauled his party back from the brink in a matter of weeks.

Rutte’s minority centre-right coalition was closely allied with Germany in taking a hawkish line on austerity and dictating tough terms to bail out beneficiaries, but it collapsed in April after less than two years when it emerged that The Netherlands also needed to fill a huge funding gap to meet EU-set budget deficit targets by next year. Wilders, propping up the minority government in parliament, vetoed the welfare cuts needed to meet the targets set by Brussels.

Samsom is a 41-year-old former Greenpeace activist and nuclear scientist who emerged as a prime ministerial contender due to his strong television performance in the campaign debates, but indications on Wednesday night appeared to show that Rutte had first claim on being prime minister.

Power politics in The Netherlands get under way in the wake of, rather than before, an election because of the coalition system and the highly fragmented party spectrum. The horse trading will start on Thursday and the formation of a government could take months.

The key sticking points of a Lib-Lab partnership will be over the pace, scale and location of spending cuts and tax rises. There could also be disputes over the ongoing attempts to stabilise the euro and Holland’s participation in bailing out weaker eurozone countries.

The outcome represented a victory for pro-EU parties, although Rutte has had little good to say about the EU and attracted some of Wilders’ anti-EU voters by, for example, declaring on television that Greece would not get another euro of Dutch money.

Labour is likely to argue for slower spending cuts than Rutte, take a softer line on eurozone bailouts and seek to temper the austerity, trying to tilt the balance of power in the eurozone towards President FranÃ§ois Hollande’s socialists in France and away from Chancellor Angela Merkel in Berlin.

The two biggest parties, if joined in a coalition, will need to agree on raising the retirement age, on how to reform the most generous system of mortgage tax relief in Europe, on health, social security and other welfare cuts, all to meet EU budget targets by next year in one of the wealthiest countries in the Europe with some of the lowest unemployment.

The election was followed intensely in EU capitals for the message being sent on austerity and the euro crisis. Brussels will be relieved by the result, although the Dutch have become much more wary of the EU, albeit keen to keep the union and the euro. While broadly pro-EU, voters are hostile to greater European integration entailing surrender of more sovereign powers to EU institutions.