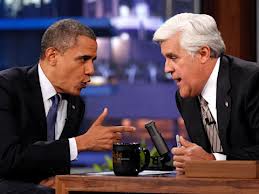 It is no secret that there is little love lost between Donald Trump and Barack Obama, with the latter’s origins and place of birth increasingly an obsession for the former. But it appears the spat may have been going on for longer than many suspected, with Obama jokingly suggesting it began in childhood â€“ when they were both growing up in Kenya.

The cheeky remark appeared to have scored the president a direct hit against the billionaire real estate mogul, who has championed the “birther” movement that falsely claims Obama was born in Kenya and so cannot be president. On the Tonight Show with Jay Leno, Obama joked that the two men had a long-running dispute. “This all dates back to when we were growing up in Kenya. We had constant run-ins on the soccer field, he wasn’t very good and resented it. When we finally moved to America, I thought it would be over.”

On Monday Trump promised a “gigantic” announcement about Obama that could change the course of the presidential race. Critics were underwhelmed when the announcement finally came in a web video on Wednesday: an offer to donate $5m to a charity of the president’s choosing in return for the release of his college records and passport application.

Trump said: “I have a deal for the president, a deal that I don’t believe he can refuse, and I hope he doesn’t. If Barack Obama opens up and gives his college records and applications, and if he gives his passport applications and records, I will give to a charity of his choice â€“ inner-city kids in Chicago, American Cancer Society, Aids research, anything he wants â€“ a cheque, immediately, for $5m.”

Critics accused the mogul of pulling another publicity stunt. The comedian Andy Borowitz tweeted: “Attention parents: if you give your children even the tiniest bit of attention now, maybe they won’t grow up to be Donald Trump.” Jim Geraghty, of the conservative National Review, posted: “If at any point you seriously considered Donald Trump for president, please study the error of your ways in quiet, private contemplation.”

Trump defended his actions, tweeting: “This is not a media event or about Donald J Trump â€“ this is about the United States of America.” He added: “‘The response has been fantastic â€“ actually overwhelming! Thank you!”

Asked about the announcement by Jay Leno, Obama looked unfazed and appeared unlikely to rise to the bait. Instead he cracked more jokes. Asked whether there was a cure for “Romnesia” â€“ Obama’s word for what he describes as Mitt Romney’s selective memory â€“ he responded: “Obamacare covers pre-existing conditions.”

The president promised sweets for all trick-or-treaters coming to the gates of the White House, and extra large chocolate bars for anyone from the swing state of Ohio. “It is an election year, so candy for everybody,” Obama announced. “If anybody comes from Ohio to the White House, they will get a Hershey bar about this big,” he said, holding his hands wide apart.