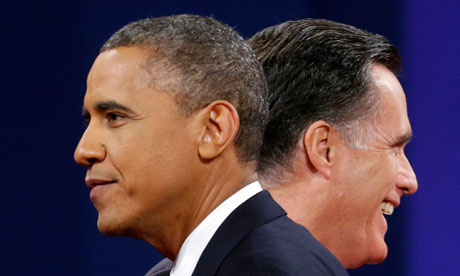 BY:Michael Cohen Inside America for The Observer, Sunday 28 October 2012

First, we shouldn’t discount the president’s record. Then there’s the dynamic force of his campaign operation

On 22 September 2012, President Barack Obama enjoyed, according to Pollster.com, his largest popular vote lead in the US presidential election campaign, post convention season. He was up by four points in the national polls, had a six point advantage in the crucial swing state of Ohio, a narrow three point lead in Florida and a near four point advantage in Virginia.

The popular election forecasting website fivethirtyeight.com predicted that Obama had a 77.5% chance of winning the election, a number that would rise to as high as 87.1% by 4 October. The improvement in Obama’s poll numbers was not necessarily that surprising. On 17 September, the liberal magazine Mother Jones released a devastating video tape that showed Republican candidate Mitt Romney dismissing the 47% of the country that he claimed were “dependent on government” and who refused, he said, to take “personal responsibility and care for their lives”.

The tape was practically confirmation of a key Obama campaign line of attack against Romney â€“ that he was a wealthy man with no empathy or concern for the plight of the poor and the working class. As a recent Obama ad running in Ohio suggested, the tape appeared to imply he was “not one of us”.

To many political observers, the election was all but over; a flawed and less than competent Republican candidate appeared simply unable to take advantage of an underperforming economy to dislodge a relatively unpopular president. Few pundits could see much of a way in which Romney might be able to stop the bleeding.

Then Obama and Romney met in the first presidential debate of the 2012 campaign and everything changed â€“ or so it seemed. Romney’s public image had been so badly hurt by an onslaught of Obama’s negative ads that he came into the debate needing only to deliver a slightly better than average performance to spur a reconsideration of his candidacy. Romney exceeded those low expectations at the same that his opponent badly under-performed his.

There is a recurrent pattern in presidential debates that an incumbent, rusty from not having debated in four years, loses the first meeting between the candidates. Obama’s performance would have been bad if he had merely lost; instead, he got walloped (or so was the opinion of commentators and hyperventilating supporters of the president).

Republicans were suddenly energised about a candidate for whom they had, until then, little affection, while Democrats, rather than rallying around the president, took turns trying to find new and creative ways to describe the full breadth of his defeat. Within days of the debate, the poll numbers began to shift dramatically in Romney’s favour. By 9 October, only six days later, Romney had taken the lead in both Pollster.com’s average of national polls and Real Clear Politics polling average.

It seemed suddenly that a race, which once looked to be a foregone conclusion, was suddenly slipping out of the president’s grasp. But not so fast. Just as soon as Romney’s momentum began to rise, it stopped and the race simply reverted to the status that existed pre-debate; a narrow Obama lead in the national poll and a more significant lead in the all-important electoral college tally. It was helped along by Obama’s stronger performances in the later debates, but the larger element of his continued advantage is a combination of both Obama the president and Obama the politician and the decisions that he has made wearing both hats.

First, there are the presidential decisions. When historians look back on Obama’s presidency â€“ no matter what happens on 6 November â€“ two legislative accomplishments will loom largest: the passage of comprehensive healthcare reform and the stimulus bill passed in February 2009 that saved the economy from further economic calamity.

But while the stimulus might end up having an extraordinarily transformative and wide-reaching impact, it is rarely mentioned directly on the campaign trail by Obama. Instead, the president is more inclined to talk about a much smaller policy decision, but one whose political impact has been much larger â€“ the bailout of the US car industry.

In key swing states of the Midwest, where manufacturing is still the lifeblood of the economy, the bailout almost certainly saved the US car industry. Nowhere has the bailout paid larger political dividends than in Ohio, a state that is by far the most important in the entire election and where one in eight jobs is tied to the car industry. Ohio looms largest because even though it has the seventh highest number of votes in the US electoral college, if Obama wins there, along with Wisconsin and Nevada â€“ two states where he is currently leading in public polls â€“ there is virtually no chance he will lose the election.

Obama has consistently led in Ohio. It is his campaign firewall. His advantage there comes not only from the auto bailout but also from the fact that he has devoted enormous time and energy to the state, both in numerous visits and the opening of 131 campaign offices, a total three times higher than that of Romney.

This is the second key to Obama’s likely success on election day â€“ his campaign infrastructure. In 2008, the Obama campaign made the decision to utilise its vast resources in building the best ground game and best get-out-the- vote operation that American politics had ever seen. They succeeded and according to one political scientist may have, through their campaign efforts, moved three states into their column on election day.

The Obama infrastructure appears better this year. Not only have the presidential campaigners developed sophisticated, data-driven techniques for identifying supporters, reaching out to them and ensuring they get to the polls, but they have opened hundreds of campaign offices around the country â€“ almost exclusively in swing states â€“ and hired hundreds of paid staff to man them.

The Republican ground game has dramatically improved from the hapless McCain effort in 2008, but few political observers believe it can hold a candle to Obama’s. Beyond the advantage in offices that Obama enjoys in Ohio, he has a nearly two to one edge in practically every other swing state. While the number of offices is not the whole story, it does provide a hint of how significant an investment Obama has made in his campaign infrastructure and in a close race that infrastructure has the potential to make all the difference.

It’s still hard to predict with certainty what will happen on election day. But it is, day by day, becoming ever more difficult to imagine a scenario in which Barack Obama is not re-elected president. And if he does win, it’ll be in large measure because, to coin a phrase popularised by Republicans: “He built that.”