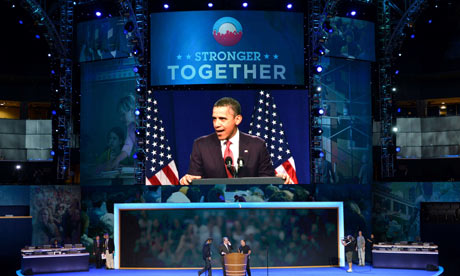 BY: Ewen MacAskillin Charlotte for the guardian.co.uk, Monday 3 September 2012 19.32 BST

A row over the extent of economic recovery broke out on the eve of the Democratic national convention after a senior member of Barack Obama‘s campaign team claimed that Americans were by any measure better off than four years ago.

The Republicans immediately pounced on the remarks by Stephanie Cutter, issuing a long list of economic indicators they said showed people felt â€“ and were â€“ worse off.

Cutter, Obama’s deputy campaign manager, is technically correct that the economy is in better shape than four years ago, but she is at odds with the president and other senior advisers who have been much more cautious in their claims about the recovery, given widespread unhappiness over the slow pace of job growth.

The economy is set to be the dominant issue of the three-day Democratic convention in Charlotte, North Carolina, as Obama seeks to open up a poll lead over Mitt Romney.

Romney, who was formally nominated as the Republican candidate last week in Tampa, received no bounce in the polls, with a Gallup poll showing his presidential nomination speech had been the worst received since it began measuring them.

Obama, in his speech on Thursday evening, will try to convince voters that recovery, though sluggish, is well under way, and that, if re-elected, he has a plan to boost the economy over the next four years.

The slow rate of recovery could cost him the November election, however. No president since the Great Depression has won a second term with unemployment above 8%, and the morning after Obama’s speech the latest jobless figures are due to be published, with economists predicting no dramatic drop from the present 8.3%.

Cutter, the deputy campaign manager, speaking on NBC, contrasted the state of the economy today with that of 2008 towards the end of president George Bush’s tenure.

“Let me just walk you through what life was like four years ago right now. In the six months before the president [Obama] was elected, we lost 3.5 million jobs, wages had been going down for a decade, [the] auto industry [was] on the brink of failure. Our financial system â€“ this was just about the time we saw banks go under.”

She added: “By any measurement, the country has moved forward from where we were, from what we inherited four years ago.”

Her comment came less than 24 hours after fellow senior Obama advisers David Axelrod and David Plouffe adopted a more cautious approach on the Sunday talk shows, saying it was going to take a lot more time to get the US economy back on its feet.

Cutter has a reputation for being more direct and more blunt that Axelrod and others in the campaign team. She shot to prominence earlier this year when she suggested that Romney was “either a felon or a liar” in relation to his tax affairs.

Romney’s campaign team, in a press statement, published a list of measurements it said showed there was little reason for Americans to feel better off: the more than 23 million out of work, average income down, savings lost, a rise in poverty and an increase in those dependent on food stamps, and higher petrol prices.

RNC chairman Reince Priebus was quick to dismiss Cutter’s claims, telling reporters in Charlotte: “The president is going to be on defence here, desperately trying to paper over the dismal record and make struggling Americans forget about their problems.

“Today, the thrill and pixie dust of Barack Obama’s presidency is gone.”

Priebus also claimed Mitt Romney has taken a lead in the polls, and said: “We’re already ahead. If the election were held today, we’d be winning today.”

Democratic party officials said Obama will make the economy the main theme of his convention speech, addressing what he had done during his first term and what he proposed to do in the second.

Obama, on a campaign tour of swing states before his arrival in Charlotte, highlighted during a stop in Ohio â€“ a key election state â€“ his role in rescuing the car industry through a bailout that Romney had opposed.

The Democratic leader in the House, Nancy Pelosi, speaking a meeting of conference delegates, characterised the Republicans as the party supporting the wealthy at the expense of everyone else while the Democrats wanted to build up the working-class, one of the core campaign themes of the convention.

“On the ballot is nothing less than the character of our country,” Pelosi said.

With Obama and Romney tied in the polls at around 46%, the Democrats are privately hoping the publicity generated by the convention will provide a bounce that will lift him above the crucial 50 per cent mark.

Romney received no bounce from last week’s Republican convention, according to the polls. A Gallup poll published on Monday said his convention speech received the lowest ratings of any presidential nomination speech since the company began measuring them in 1996.

Public Policy Polling, after surveys in Florida and North Carolina, recorded more enthusiasm for other Republican speakers such as former secretary of state Condoleezza Rice than for Romney.

Democratic officials, at a pre-convention press conference, said the difference between the Democratic and Republican conventions was clear in the extent of the diversity of the delegates.

In contrast with the large percentage of white, elderly Republican convention-goers, the Democratic one was more representative of America, they said â€“ a mixture of white, black, Latino, Asian, Christian, Jewish and Muslim Americans, as well as an even split between men and women.

Obama is taking a gamble in holding his speech in a 73,000-seater sports stadium, a potential test of his popularity. While he easily filled a similar stadium at the 2008 convention in Denver, Republicans have cast doubt on his ability to fill the arena in Charlotte.

Steve Kerrigan, who is in overall charge of the convention organisation, insisted it would be full and, in spite of a patchy weather forecast, would go ahead “come rain or shine”, though he added there is a contingency plan.

The Democratic mayor of Charlotte, Anthony Foxx, insisted there was still enthusiasm for the president, and there had been queues half-a-mile long when tickets for the event were released.

Obama opted to hold the convention in North Carolina in hopes of holding on to the state. He was the first Democrat to take the state since Jimmy Carter in 1976. Since the convention decision, his poll ratings in the state dropped and the state was moved into the category of Republican gain.

But the polls have narrowed again. Foxx said: “North Carolina was tight in 2008. I do not think it will be an easy state to win but it is a state the president can win,” he said. He added: “This race is going to go all the way down to the wire.”

In spite of the mayor’s optimism, the Obama campaign appears to have written North Carolina off, at least for now. It has spent little money campaigning in the state and a new television ad to be aired in swing states â€“ Colorado, Iowa, New Hampshire, Nevada, Ohio, Virginia, and Florida â€“ does not include North Carolina.