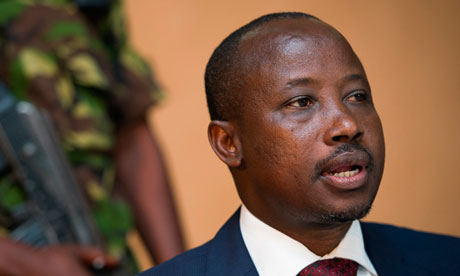 Congo rebels appeared to be looting the central bank in Goma after refusing to withdraw from the city they captured last week.

M23 fighters surrounded the bank early this afternoon and were seen loading white bags into cars. The armed rebels looked nervous and ordered the Guardian to leave the area.

“They’re looting the bank,” a UN source said. Later another UN source denied that there had been money in the bags, insisting they were full of beans.

In a press conference in the morning on Tuesday the rebel leader Bishop Jean-Marie Runiga said M23 would refuse to obey a call by regional leaders of the International Conference of the Great Lakes to leave the capital of North Kivu province to pave the way for peace talks.

A withdrawal would be the result, not a precondition, of negotiation, Runiga said.

“I demand the following of [the Congolese president] Joseph Kabila, if M23 is to withdraw [from Goma],” he said, before outlining a series of conditions. Notably, he demanded freedom for the opposition leader Etienne Tshisekedi and other political prisoners, the dissolution of the electoral commission, and an investigation into the attempted murder of Dr Denis Mukwege.

“If [Kabila] does this then there is no problem, we can talk immediately about leaving the town,” said Runiga.

A spokesman for the Democratic Republic of the Congo government, Lambert Mende, told Reuters these conditions were a farce. “It’s a farce, that’s the word,” he said. “There’s been a document adopted by the region [to move towards negotiations]. If each day they’re going to come back with new demands it becomes ridiculous. We’re no longer in the realms of seriousness.”

The army spokesman Colonel Olivier Hamuli said his forces would take action against the rebels. “If they will not leave Goma then war will continue,” he said. “We must recapture the territory that the rebels have taken.”

Meanwhile there were reports of an attack by the extremist rebel Democratic Forces for the Liberation of Rwanda (FDLR), who are enemies of the M23, over the border in Rwanda. Brigadier General Joseph Nzabamwita, the Rwandan army spokesman, told Reuters 150 rebel fighters attacked villages in Rwanda near the Congolese border. FDLR denied their involvement.

“M23 control the border [with Rwanda]. Where are we supposed to have crossed?” asked the Hamuli, the army spokesman.

There were reports of fighting between the Congolese army and M23 near the village of Shasha about 21 miles (35km) west of Goma overnight between Monday and Tuesday. A UN source said that neither the army nor M23 had significantly changed their positions after the clash.

M23 is a reference to 23 March, the day in 2009 when the Congolese government signed a peace deal with various rebel groups operating in the east of the country. M23 wants to discuss these accords which, it says, were not adhered to by the government. However, Runiga on Tuesday said their demands now went further than simply revisiting the three-year-old peace deal.

“Between 2009 and 2012 many things have happened. There are many problems in Congo which persist,” he said. “We want negotiations, but only on the condition that we re-evaluate [the 2009] accords and also deal with fundamental questions about the life of the nation.” Corruption, infrastructure, education, health, security and democracy were all on M23’s agenda for discussion, Runiga said.