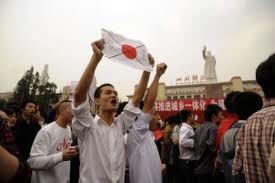 This article titled “China-Japan row over disputed islands threatens to escalate” was written by Justin McCurry in Tokyo and Tania Branigan in Chengdu, for guardian.co.uk on Tuesday 18th September 2012 11.45 UTC

Anti-Japanese protests are continuing across China as the countries’ competing claims to a group of islands threatened to escalate. There were reports that a large flotilla of Chinese fishing boats was due to arrive in the area later on Tuesday.

Hundreds of Japanese firms closed their businesses, as demonstrators took to the streets to mark the anniversary of the start of Japan’s 14-year occupation of northern China in 1931.

As the region braced for the possible arrival of up to 1,000 fishing boats in waters near the disputed Senkaku islands â€“ known as the Diaoyu in China â€“ Beijing reacted angrily to reports that two Japanese activists had briefly landed on one of the three islands that the Japanese government bought from their private Japanese owners last week.

“The unlawful landing of the Japanese rightwingers on the Chinese territory of the Diaoyu islands was a gravely provocative action violating Chinese territorial sovereignty,” Hong Lei, a Chinese foreign ministry spokesman, said in a statement.

At least two of 11 Chinese ocean surveillance and fishery patrol ships sailing near the islands have entered what Japan considers its territory, the public broadcaster NHK said, quoting Japan’s coastguard.

China’s national defence minister, Liang Guanglie, said Beijing reserved the right to take further action against Japan over the dispute. It was hoped the countries could reach a negotiated solution, but the Japanese government should “undo its mistakes and come back to the right track of negotiations”, he said.

The Japanese activists briefly landed on one of the islands â€“ which are thought to be located amid huge natural gas deposits â€“ after swimming ashore from a dinghy, then returned to their boat, NHK said.

The Asahi Shimbun newspaper quoted an aide to Yoshihiko Noda, the Japanese prime minister, as saying that the possible arrival of the fishing boats would take the dispute to a “new stage”.

He told the paper: “The government is taking a wait-and-see approach for the moment. But we will not be able to sit by idly if fishing vessels reach the Senkaku islands in large numbers. It could lead to a new stage.”

The coastguard could be forced to arrest the captains of any Chinese vessels that enter Japan’s territorial waters, in a repeat of an incident that soured relations between the two countries in 2010. If the coastguard is unable to cope, some have speculated that the defence forces could become involved.

The Japanese activists’ landing and the presence of Chinese ships in the area heightened tensions days after protesters set fire to Japanese factories, attacked other businesses and hurled objects at the Japanese embassy in Beijing.

Tuesday’s demonstrations reportedly spread to 100 cities, but there were no reports of violence amid a much heavier police presence. The Chinese authorities have endorsed the popular outpouring of anti-Japanese sentiment â€“ now in its eighth day â€“ but have warned marchers not to break the law.

Wang Guoming, a retired soldier, said anger towards Japan had prompted him to travel to Beijing from his hometown in Shanxi province.

“I came here so our islands will not be invaded by Japan,” Wang told the Associated Press. “We believe we need to declare war on them because the Japanese devils are evil. Down with little Japan!”

In central Chengdu, around 1,000 demonstrators waved Chinese flags and chanted, but appeared outnumbered by the massed ranks of paramilitary, uniformed and plainclothes police. A note left on a Japanese-made police car nearby read: “Reject Japanese products. Don’t dig your own grave.”

The Chinese government moved to dampen the fervour of the protests late on Monday after signs that some of the demonstrators’ anger was being directed towards their own government.

Authorities in China are normally quick to prevent even small protests, but have a history of tolerating mass anti-Japan protests for a few days before stepping in to tone them down or stop them, aware of the potential for the mood to turn against them.

Some human rights activists have already sought to take advantage of the rare chance to take to the streets: one protestor told the Guardian three of his friends had been detained by police after 10 of them marched with a banner reading “Democracy, human rights, constitutional government” at a demonstration in Shenzhen this weekend. They were released with a warning.

“We saw the anti-Japan protests online and joined because China rarely gives people a chance to take part in protests,” the man said. “Police said we had disturbed social order and could not have the protest because it was not harmonious with the other protesters.”

China’s state news agency, Xinhua, announced that Beijing had expressed “strong dissatisfaction” after one of its consulates in Japan was attacked with smoke bombs.

The US defence secretary, Leon Panetta, repeated calls for both sides to prevent an escalation in the crisis amid calls for a boycott of Japanese goods that could harm ties between two important trading partners.

Washington has not taken sides in the sovereignty row but is bound by its security treaty obligations with Tokyo to come to Japan’s aid if it is attacked.

“We hope that the US will truly abide by the principle of not taking sides over the question of who the Diaoyu islands belong to,” China’s foreign ministry spokesman Hong Lei said.

The Japanese airline All Nippon Airways reported more than 18,000 cancellations from passengers in the coming weeks, most for flights from China.

While there have been no reports of violence against Japanese citizens, some expatriates voiced concern about their safety. Many stayed at home on Tuesday on the advice of their employers and the Japanese government.

There are no signs at this stage that Japanese companies are preparing to withdraw from China, although analysts say they may reconsider future investments there.