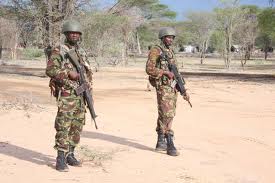 This article titled “British soldiers accused in Kenyan murder case” was written by Richard Norton-Taylor, for The Guardian on Tuesday 14th August 2012 20.05 UTC

British soldiers have been accused of being involved in the murder of a Kenyan prostitute close to a military training area north of the capital, Nairobi.

The body of 21-year-old Agnes Wanjiru-Wanjiku was found in a septic tank in a hotel in Nanyuki in June, more than two months after she disappeared. The Ministry of Defence was made aware of the allegations then.

Witnesses in Nanyuki told Sky News that Wanjiru-Wanjiku was seen entering the hotel with two British soldiers on 31 March.

Social Watch, a human rights group, has written to the Kenyan department of public prosecutions complaining that the case had not been properly investigated. The letter claimed that “a night guard witnessed a fierce fight in the room Wanjiru-Wanjiku and the British soldier were occupying”.

The police were accused of taking a “casual stance” and of not being willing to pursue British military personnel.

Another letter, from the office of the Kenyan director of public prosecutions to the criminal investigations department of the Kenyan police, calls for an urgent “progress report on the case”.

It adds: “The complainant has intimated that there is laxity on the part of the police to conclusively investigate the case and bring the culprits to book despite willingness by witnesses to come forth and testify.”

British defence officials suggested soldiers could be called as witnesses in the case, but added that no allegations had been officially levied by the Kenyan authorities and no individuals had been charged. They said they were ready to co-operate in any investigation if required to do so and had told the Kenyan authorities how they can obtain assistance from the MoD.

An MoD spokesperson said: “This is an ongoing Kenyan investigation. We understand that individuals who were in the local area, potentially including some military personnel, may be called on as witnesses in the case. We stand by to offer any assistance and co-operation that is required. As this is an ongoing Kenyan investigation, it would be inappropriate for the Ministry of Defence to comment further.”

It is not the first time allegations have been made about the conduct of British troops in Nanyuki. In April this year it was reported that more than 200 troops were involved in a brawl at the town’s Sportsman’s Arms bar. The bar was said to have been destroyed and some of the soldiers were airlifted to hospital in Nairobi. The MoD is investigating the incident.

The area is a training base for British troops before they deploy to Afghanistan.