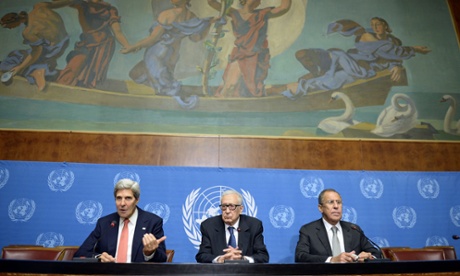 US Secretary of State John Kerry next to United Nations-Arab League special envoy for Syria Lakhdar Brahimi and Russian Foreign minister Sergei Lavrov during a press conference after their high-stakes talks on Syria’s chemical weapons at the UN headquarters in Geneva. Photograph: PHILIPPE DESMAZES/AFP/Getty Images
Inspectors to be given ‘immediate unfettered access’ with a ‘comprehensive list’ of weapons from Damascus within a week, says Kerry

The United States and Russia have agreed that Syrian chemical weapons will be placed under international control and destroyed in a process that will begin with a week.

International inspectors from the Organisation of the Prevention of Chemical weapons must be given “immediate and unfettered” access to Syrian chemical weapons, said the US secretary of state, John Kerry, while Syria must give a “comprehensive list” of its chemical weapons within one week.

Speaking at a press conference in Geneva on Saturday after three days of talks, Kerry outlined the details of the deal as Russian foreign minister, Sergei Lavrov looked on.

The deal “would allow us to expedite the elimination of Syria’s chemical weapons” which would protect the Syrian people, Syria’s neighbours and the world.

Kerry said the removal of chemical weapons would be “credible and verifiable” if fully implemented. “The world will now wait for the Assad regime to honour its commitments,” said Kerry. “There is no room for anything other than full compliance.”

Kerry said Russia and the US had agreed on the amount and type of Syria’s chemical weapon arsenal and committed to assuming control of it and eliminating it in the “soonest and safest” way.

The agreement seems to remove the prospect of any strike against Syria following the chemical attacks in Damascus on 21 August which killed up to 1,300 people.

Kerry said any violations will result in “measures” from the UN security council, while Lavrov said the violations must be sent to the security council from the board of the chemical weapons convention before sanctions short of the use of force would be considered.

Kerry said the inspectors must be on the ground by November and destruction or removal of the chemical weapons must be completed by mid-2014.

Lavrov called the agreements a “decision based on consensus and compromise and professionalism.”

“Nothing is said about the use of force or about any automatic sanctions. All violations should be approved by the security council.”

However, Kerry said that the president of the US as the commander in chief retains the right to defend the US and its interests regardless of what happens in Congress.

He said that “depending on what Assad does” the threat of force remains open either to the security council or to the US and like-minded allies. Assad’s willingness to comply with the agreement will be “quickly put to the test”, he added.

Kerry is expected to travel to Israel to brief the Israeli prime minister, Benjamin Netanyahu, on Sunday before travelling to Paris to brief William Hague, the British foreign secretary, and Laurent Fabius, the French foreign minister.