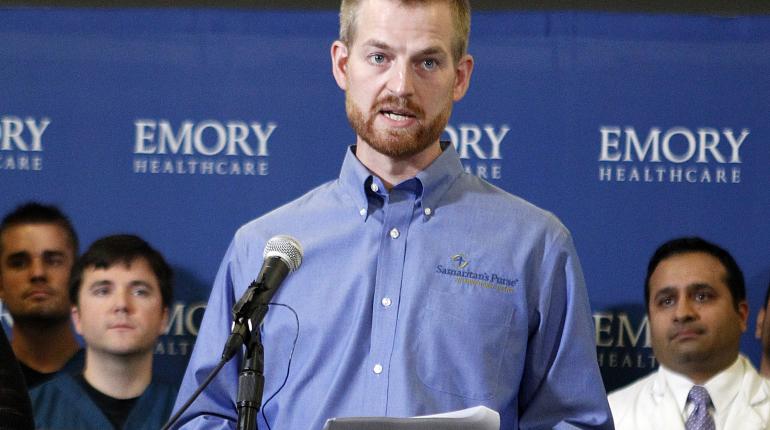 After being kept in isolation for nearly three weeks for Ebola virus treatment, Dr. Kent Brantly was discharged from Emory University Hospital in Atlanta, Ga., early Thursday. During a live press conference, Brantly revealed that his colleague, Nancy Writebol, had been released on Tuesday. Though the world would like to credit the pairâ€™s recovery to treatment with the experimental ZMapp serum, experts urge itâ€™s too soon to say if the drug played any part at all in the healing process.

Brantly and Writebolâ€™s release was a result of two back-to-back negative blood tests for Ebola, proving they no longer had any strains of the virus in their system. During the televised press conference, Dr. Bruce Ribner, medical director of the Emory University Hospitalâ€™s Infectious Disease Unit, announced that he expected the patients to make a full recovery in due time, but as of now they pose â€œno public health threat.â€

In his first public appearance since falling ill with the Ebola virus 31 days ago, Brantly addressed the media with a statement of gratitude, explaining how he was â€œthrilled to be alive, to be well, and to be reunited with [his] family.â€ In his emotional statement, the doctor also reminded the media that while he and Writebol were fully healed, the outbreak in West Africa was far from over. â€œI encourage those in positions of leadership and influence to do whatever possible to bring this Ebola outbreak to an end,â€ urged a well but still fragile-looking Brantly.

It is now confirmed that the patients are fully healed of the Ebola virus, but what lead to their recovery is more opaque. â€œWe have no idea,â€ said Ribner in response to a journalist questioning whether or not ZMapp played a role. â€œThey were the very first individuals to ever receive this agent. Frankly, we do not know whether it helped them, whether it made no difference, or, theoretically, whether it delayed their recovery.â€ Rather than credit ZMapp, Ribner suggested that the recovery was largely due to the care administered at Emory University Hospital. â€œWe have no idea [if the drug helped], but even going into this, we knew that the key to resolving the Ebola virus infection was aggressive supportive care and we knew certainly we could do that at a better level than the facilities they were at in Liberia,â€ Ribner said.

The FDA, as well as other companies, are currently working to speed up studies into possible Ebola drug treatments, but Ribner was not able to comment on any specific drug candidate, adding only that â€œweâ€™ve looked at a variety of agents that may be available.â€ Still, even without proving the success of ZMapp, information learned from Brantly and Writebolâ€™s cases has done much to help advance scienceâ€™s understanding of the Ebola virus. At the moment, a number of doctors are working on writing medical journals on Brantly and Writebolâ€™s care with the hopes of distributing the information to colleagues in Africa.