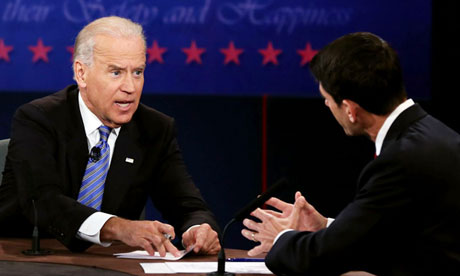 Joe Biden dominated the vice-presidential debate against opponent Paul Ryan on Thursday night with an aggressive and confident performance that gave heart to the Democratic base but risked alienating undecided voters.

Biden’s combative approach in Danville, Kentucky, went some way towards undoing the damage done by Barack Obama’s listless performance last week, scoring point after point against Ryan in a 90-minute debate dominated by foreign issues such as Iran, Afghanistan and Syria and domestic issues including tax and the deficit.

But his demeanour may have proved divisive as he repeatedly dismissed Ryan, talked over him, interrupted, laughed and at one point sighed, “Oh God”.

Although the night on balance belonged to Biden, the disparity between him and Ryan was not as pronounced as that last week between an aggressive Romney and a passive Obama.

Much of the debate was on foreign policy, playing into Biden’s strength as a former chairman of the Senate foreign affairs committee. He was animated in making his points in a way that Obama failed to do and the laughter may have been deliberate, to try to belittle Ryan.

On Iran and Syria, Biden tried to portray Ryan as leaning towards taking the US into another conflict, one that war-weary Americans did not want. “Facts matter,” he said, lecturing Ryan on the details of Iran’s nuclear programme, saying it was not yet close to achieving a weapons capability.

On domestic policy, Biden pushed Ryan on plans to cut the tax bills of the wealthy, saying they did not need it, and also questioned how Ryan could get the deficit down. Biden said no one in history managed to do this.

“With all due respect, that’s a bunch of malarkey,” Biden said of Ryan and Romney’s plans in general. “Not a single thing he said is accurate.”

Ryan got in a hit when he got personal, noting that unemployment in Scranton, Pennsylvania â€“ Biden’s hometown â€“ had risen. But when Ryan went on to say, “That’s how things are going all across America,” the vice-president interrupted. “That’s not how things are going. You don’t read the statistics,” he said, referring to the drop in unemployment to 7.8% announced on Friday.

Biden raised the secret video in which Romney was dismissive of 47% of the population as freeloaders, a line that Obama singularly failed to bring up last week, to the dismay of Democrats. Ryan said the 47% remark was not what Romney had meant to say.

But Biden failed to unnerve his younger opponent or to force him into making any gaffes. Ryan even succeeded in forcing Biden into making one error, potentially serious, in relation to the Benghazi attack that left a US ambassador dead along with three other Americans.

Biden said the Obama administration had been unaware that there had been a request by security on the ground in Libya to at least keep the size of protection team intact and preferably increase it. But a state department official, giving evidence in front of a Congressional committee on Wednesday, confirmed there had been such a request.

Republicans afterwards focused on Biden’s behaviour, in particular what they described as his incessant grinning and smirking, as potentially a vote-loser. Brendan Buck, Ryan’s press officer, in the Spin Room, said: “The big takeout tonight is Joe Biden’s dental work. There is a time for laughter. It is not endearing to see a person laughing in a serious debate … I do not think it will play well with people who saw it on a splitscreen.”

The pressure now switches to Obama to produce an equally good performance against Romney when the two meet in the second of three presidential debates on Tuesday in Long Island, New York. The president, who watched the debate on board Air Force One, said: “I’m going to make a special point of saying that I thought Joe Biden was terrific tonight.”

Democratic party activists badly needed a lift after a week in which they have expressed dismay and puzzlement over Obama’s failure last week and the subsequent dramatic and continuing slide in the polls.

Both teams will now anxiously await the first serious polls, though it is unlikely that a vice-presidential debate will make much impact on voter intentions. The main benefit for Democrats is as a morale-booster.

Obama’s main strategist, David Axelrod, claimed it was a clear win for Biden. “It was like looking at the school principal debating the student president.”

Asked about the risk of Biden’s laughter alienating independent voters, Axelrod insisted laughter was inevitable “when you are debating an opponent who is seriously evading and distorting facts. You react to that.”