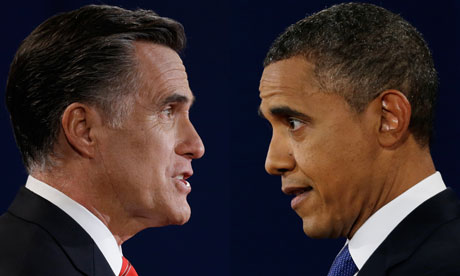 You may know their views on the economy and foreign policy but what about the important stuff? Why don’t either of the US presidential candidates drink coffee? How tidy are their desks? And where do they stand on Coco Pops? Oliver Burkeman sizes up Obama and Romney ahead of the US election

Obama: Do The Right Thing
Romney: The Sound of Music

Obama: Writing pretentious love letters. “I haven’t read The Waste Land for a year â€¦ but I will hazard these statements â€¦ [T S Eliot’s] fatalism is born out of the relation between fertility and death, which I touched on in my last letter,” he wrote to one girlfriend, Alex McNear. “Life feeds on itself. A fatalism I share with the western tradition at times.”

Romney: Drawing an approximately 12ft-high heart in the sand on a beach in France, where he was serving as a Mormon missionary, writing “I LOVE ANN” inside it, stretching out on top, then sending the resulting photograph to his future wife

Worst recorded use of bad language

Romney: “Bloomin'” (as in “Can you believe those bloomin’ Democrats?”) Reporters who covered Romney during his time as Massachusetts governor agree with classmates of Romney’s at Harvard Business School in the early 1970s that they’ve never heard him use language any stronger

Obama: In 2008, the pilot of the MD-81 campaign plane carrying then-Senator Obama radioed an emergency call after losing control of the aircraft’s up-and-down movements

Romney: In 1968, a Mercedes crashed into the Citroen Romney was driving along a French country road, killing a passenger. French police erroneously pronounced Romney dead at the scene, too

Obama: For almost a year, workers have been “building something deep below the White House”, Michael Lewis reported in Vanity Fair, resulting in a large crater. But when he asked for more information, all he was told was that it was “infrastructure”

Romney: The Romneys provoked derision earlier this year when it emerged that they had had a $55,000 car elevator installed at a home they’re renovating in La Jolla, California

Early anecdote suggesting that he was destined for great things

Obama: According to his biographer David Maraniss, Obama wrote, in a school essay at the age of 8: “I live near the school. I usually walk to the school with my mom, then go home by myself. Someday I want to be president. I love to visit all the places in Indonesia. Done. The eeeeeeend.”

Romney: Douglas Anderson, now a business school professor and Romney friend, was in his first year at Stanford University when a student he barely knew approached him. “Do you know Mitt Romney?” he asked. Anderson replied that he didn’t. “Mitt Romney is the finest person I have ever known!” the student said, then walked away

Obama: Ralph Ellison’s Invisible Man, which he carried everywhere for several months as a student; Julian Barnes’s The Sense of an Ending, which was observed on his reading pile at the White House; Moby-Dick, which he once said was his favourite; and the Harry Potter books, all of which he claims to have read

Romney: L Ron Hubbard’s Battlefield Earth, which he called “very fun”; Jared Diamond’s Guns, Germs and Steel, which he has been quoting for at least five years, though Diamond accuses him of misrepresenting his views; the Bible, which he describes as his favourite book

Obama: Smoking, a habit that continued for the first two years of his presidency. One year ago, after a full physical, he was finally declared “tobacco-free”

Romney: Romney’s guilty indulgence is a late-night bowl of Coco Pops, or similar sugary cereal â€“ a ritual he calls his “Jethro bowl”, presumably a reference to The Beverley Hillbillies

Reason for not drinking coffee

Romney: “Hot drinks are not for the body or belly,” according to a revelation received by Joseph Smith, the founder of Mormonism, in 1833. The same goes for alcohol and smoking. Romney is said to be fond of caffeine-free Coke

Obama: On entering the White House, Obama reduced the number of Churchill busts in the White House by 50% (not by 100% or 0%, as his critics and his spokespeople have respectively appeared to claim at various points). There were two, one of which was in the Oval Office. Now there’s one, which isn’t

Romney: Romney has made a point of explaining that, if elected, he’d return the second (British-loaned) Churchill bust to 1600 Pennsylvania Avenue

Favourite films, according to the campaigns’ potentially spurious answers to various pop-culture questionnaires

Obama: Casablanca, One Flew Over The Cuckoo’s Nest

Romney: O Brother, Where Art Thou?

Obama: Spartan. Photographs of Obama’s Oval Office desk show it empty, in stark contrast to Bill Clinton’s. The president is, more generally, a declutterer. “I tend to be a spare guy anyway,” he has said

Romney: Also spartan. In tune with Romney’s famously neat appearance, a reporter who visited his presidential-transition office found it “hyper-organised” with “no piece of paper visible on any desk”

Obama: For his regular basketball game, often played at the court inside the FBI’s offices in Washington, Obama chooses former professional players or college stars. “If you take it easy on him, you’re not invited back,” one player, a former Florida State point-guard, was quoted as saying

Romney: Romney family vacations are organised around the ‘Romney Olympics’, a structured, mandatory and highly competitive sequence of sporting events, including biking, swimming and running

Telling detail illustrating the limits of his fiercely competitive spirit

Obama: In 2010, Rey Decerega, a Washington non-profit employee, accidentally elbowed Obama in the mouth during a basketball game, causing an injury that required at least 12 stitches. He was not invited back

Romney: Concerned that he wasn’t winning sufficiently often, Romney reportedly added new contests in which he was better placed to excel â€“ including “who can hammer the most nails into a board in two minutes”

Obama: Famously strict. Sasha and Malia are compelled to write reports about their trips, even if their teachers don’t require it; Malia can only use a mobile phone on weekends, and neither girl is allowed to watch TV, except for homework purposes, during the week

Romney: The one unbreakable rule, Romney’s son Tagg recalls, is that “we were not allowed to say anything negative about my mother”. Each night, the family held a “freewheeling discussion” while sitting together in a room with the lights turned out. In darkness, Tagg says, the Romneys felt they could open up

Romney: 1.88m. (Of the 13 presidential elections since the first televised debate, the taller candidate has won eight. Of the other five, one involved candidates of the same height, and one was Bush v Gore in 2000, in which Gore won the most votes)

Most damaging quote picked up by a ‘hot mic’

Obama: “After my election, I have more flexibility” â€“ to Russian PM Dmitry Medvedev, on the subject of missile defence negotiations, in South Korea in March

Romney: “[Ann] has Austrian Warmbloodsâ€¦ Me, I have a Missouri Fox Trotter. So mine is like a quarter horse, but just a much better gait. It moves very fast, and doesn’t tire, and it’s easy to ride, meaning it’s not boom-boom-boom, it’s just smooth. Very smooth” â€“ to Sean Hannity, before an interview on Fox News in April

Opinion on the “special relationship” with the United Kingdom

Obama: “We don’t have a stronger friend and stronger ally than Nicolas Sarkozy, and the French people.” (In 2009, the reported assessment of a state department official was more direct: “There’s nothing special about Britain. You’re just the same as the other 190 countries in the world. You shouldn’t expect special treatment.”

Romney: “England is just a small island. Its roads and houses are small. With few exceptions, it doesn’t make things that people in the rest of the world want to buy. And if it hadn’t been separated from the continent by water, it almost certainly would have been lost to Hitler’s ambitions” â€“ from Romney’s book, No Apology

Obama: Ate dog (along with snake and grasshopper) during his childhood in Indonesia, according to Dreams From My Father. “Say what you want about Romney, but at least he only put a dog on the roof of his car, not the roof of his mouth,” one pro-Romney blogger wrote

Romney: Tied a crate containing the family dog, Seamus, to the roofrack of his car for the duration of a drive from Boston to Canada. The dog “loved” this form of travel, Ann Romney claims

Romney: Eats only the tops of muffins, because, he argues, the butter sinks downwards. May also be an attempt to connect with Seinfeld fans

Romney: A beachfront house in La Jolla, California, described as his “main home”; a two-bedroom townhouse in Belmont, Massachusetts; a six-bedroom house on the shores of Lake Winnipesaukee in New Hampshire

Romney: At Bain Capital, fined colleagues $20 if they showed up late to meetings. He looked “physically pained”, one remembered, when he once had to pay up himself

Obama: Limits his choices to blue and grey suits to forestall decision fatigue (see above)

Romney: Smart to the point that campaign advisers reportedly worry it’s a problem. Harvard classmates recall him dressing more formally than most even then. (Though when asked in a TV interview what he wore to bed, Romney said: “As little as possible.”) In some photos, his Temple garment â€“ “Mormon underwear” â€“ has been clearly visible under his well-ironed white shirt