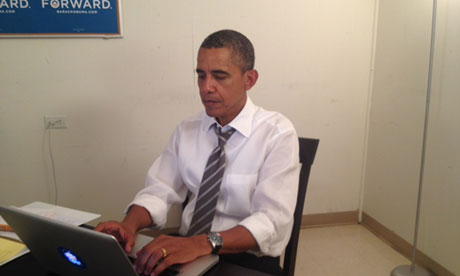 For a little while Wednesday afternoon, the commander-in-chief commanded the internet’s notoriously fickle attention

While a tropical storm batters the Gulf coast and Republicans make their case for reclaiming the White House, Barack Obama diverted attention from both by typing three simple words on Wednesday afternoon: “ask me anything.”

When a politician needs to relate better to an unsure public, secret weapons include wives, friends, pets and â€“Â if you’re Bill Clinton â€“ brass musical instruments. For Obama, his talent has long been his ability to communicate in digital. And so he appeared out of nowhere on the Reddit message board â€“ as PresidentObama â€“ fielding questions from people who want to know about everything from Gitmo to the White House beer recipe (“It will be out soon! I can tell from first hand experience, it is tasty,” he wrote.)

For the uninitiated, Reddit is a labyrinthine message board that hosts countless topic boards (subreddits) policed by interested parties (redditors). Users can cast a vote to send story links and comments up or down. The best content, in theory, rises to the top of each subreddit.

Though Wednesday was certainly a moment in the sun, Reddit has managed to stay largely out of the mainstream. For first-time visitors, the shorthand takes awhile to understand. “AMA” for instance, stands for Ask Me Anything, one of the more mainstream features on the site, where anyone can put themselves forward to be questioned about their area of interest of expertise.

Celebrities and politicians alike have attempted to let the asking public pelt them with questions â€“ with varying degrees of success, as some of the more overly self-promoting users have found out the hard way. (No word yet if Obama’s “Don’t forget to vote in November!” went over well with the community.)

And today, Obama’s “AMA” soared to the top of Reddit itself.

Here is a selection of his answers from the chat, exactly as they appeared on Reddit:

On troop surge in Afghanistan:

The decision to surge our forces in afghanistan. Any time you send our brave men and women into battle, you know that not everyone will come home safely, and that necessarily weighs heavily on you. The decision did help us blunt the taliban’s momentum, and is allowing us to transition to afghan lead – so we will have recovered that surge at the end of this month, and will end the war at the end of 2014. But knowing of the heroes that have fallen is something you never forget.

Internet freedom is something I know you all care passionately about; I do too. We will fight hard to make sure that the internet remains the open forum for everybody – from those who are expressing an idea to those to want to start a business. And although their will be occasional disagreements on the details of various legislative proposals, I won’t stray from that principle – and it will be reflected in the platform.

On money in politics:

Money has always been a factor in politics, but we are seeing something new in the no-holds barred flow of seven and eight figure checks, most undisclosed, into super-PACs; they fundamentally threaten to overwhelm the political process over the long run and drown out the voices of ordinary citizens. We need to start with passing the Disclose Act that is already written and been sponsored in Congress – to at least force disclosure of who is giving to who. We should also pass legislation prohibiting the bundling of campaign contributions from lobbyists. Over the longer term, I think we need to seriously consider mobilizing a constitutional amendment process to overturn Citizens United (assuming the Supreme Court doesn’t revisit it). Even if the amendment process falls short, it can shine a spotlight of the super-PAC phenomenon and help apply pressure for change.

Questions we wish he answered:

â€¢ President Obama, why didn’t you close Guantanamo Bay as you promised you would?
â€¢ The ice in the arctic is the lowest ever recorded, and there are two more weeks of melting left in the summer. Will climate change get the attention it so desperately needs in your second term?
â€¢ Mr. President, given the last four years (and especially the last two), what gives you confidence that Congress will be willing to work with you in a second term?

And one we’re glad he didn’t:

â€¢ Toilet paper – facing out, or facing in?