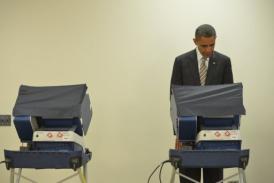 BY:Ewen MacAskill in Washington for The Guardian, Friday 26 October 2012

Barack Obama became the first president to take advantage of early voting by casting his ballot in Chicago on Thursday, which he hopes will inject urgency into his campaign’s relentless push to lock up early voters, a major part of a strategy designed to deliver a second White House term.

As new fundraising figures showing election spending is for the first time over the $1bn (Â£620,000) mark, the battle is focused almost exclusively on getting out to vote.

With 11 days left to polling day, voting is under way in 32 states, with an estimated 8 million people having cast their ballot. The percentage taking advantage of early voting is far higher than in 2008, especially in the swing states, testimony to the intensity of the door-to-door operations.

A Washington Post-ABC tracking poll released on Thursday shows Mitt Romney ahead of the president for the first time in the campaign, winning 50% of likely voters, ahead of Obama’s 47%.

The president, dispensing with the usual ritual of voting on election day to provide television footage, returned to his hometown to raise awareness about voting early by casting his ballot. At the voting station, he said: “This is the first time a president’s ever going to be early voting.”

He was asked for his driver’s licence and joked: “Now ignore the fact that there’s no grey hair in that picture.” The official who took his licence gave it the sceptical examination that has become routine when dealing with officialdom in America. Obama laughed and mimicked her expression, before heading off to cast his ballot, presumably for himself and other Democrats on the long list of candidates seeking office.

The Obama team is backing this up with an ad warning that only a relatively few votes determined the outcome of the 2000 election. The ad is titled 537, the number of votes that gave Bush victory in Florida â€“ “the difference between what was and what could have been”.

“So this year if you’re thinking that your vote doesn’t count, that it won’t matter, well, back then there were probably 537 people who felt the same way. Make your voice heard,” the ad says.

Obama’s campaign spokeswoman, Jen Psaki, said Obama was ahead of where he was four years ago in terms of early voting and winning in Iowa, Ohio and Wisconsin. The president’s early vote would send a signal to voters that “this is something they should do too,” she said.

The Democratic push reflects concern that apathy might see supporters fail to make the effort to vote on 6 November, especially if the weather is bad. It also pre-empts any last-minute surprises such as bad unemployment figures.

Republicans tend to be better at turning out in large numbers on election day.

Michael McDonald, associate professor at George Mason University, who monitors early voting, said almost 400,000 had cast their vote in Iowa, about 30% of the likely final tally, and about one million in Ohio, around 20%.

“In Iowa, you could conclude that Obama is not doing as well as in 2008 when he won by 9%. The early voting shows him with a smaller lead than 2008, but still ahead by 4% to 5%,” McDonald said. “In Ohio, who knows? It is just a mess, with lots of activity by both campaigns.”

He added: “If I was a betting man, I would put it on Obama. If he wins Wisconsin, Ohio and Iowa, he wins. If Romney loses Iowa, it is difficult for him. If he loses Ohio, it is almost impossible for him to win. It all comes down to Ohio.”

Reflecting that, both Romney and Obama spent part of the day in Ohio.
The Romney campaign released its latest fundraising figures, showing a big haul over the first few weeks of this month. It raised $111.8m between October 1 and 17. Figures for the Federal Election Commission show there were 794,958 donations to the Romney campaign, 92% of them of $250 or less. It has $169m cash in hand.

Obama received a boost when George W Bush’s secretary of state, Colin Powell, came out in favour of the president, just as he did in 2008.

“You know, I voted for him in 2008 and I plan to stick with him in 2012 and will vote for him and vice-president Joe Biden next month,” Powell told CBS News. He praised Obama for his handling of the economic mess and for ending the war in Iraq, both inherited from Bush.

Meanwhile, the normally disciplined Obama made a gaffe that could anger Republicans, indirectly describing Mitt Romney in a Rolling Stone magazine interview as a “bullshitter”.

McDonald warned that this remark could provoke Republicans. “Coaches warn players not to badmouth the other team. You do not want to rile them up.”