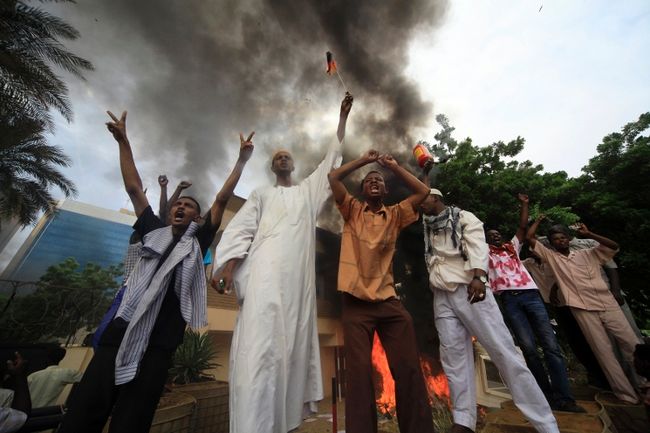 British, German and US envoys targeted as riots erupt from north Africa to south-east Asia

A wave of anger that saw British, German and American embassies in Khartoum attacked by rioters swept across the Muslim world on Friday, with violent scenes playing out on streets from north Africa to south-east Asia.

The worst violence of the day was in the Sudanese capital, where protesters targeted the German embassy first, storming through the outer wall and setting fire to buildings and a car near the gates before they were pushed back by police firing teargas. German diplomats fled to the British embassy next door, which became the next target of the mob.

William Hague, the foreign secretary, said: “Sudanese police attended the scene, but demonstrators were able to break down a perimeter wall and cause minor damage to the compound. They did not attempt to gain access to the British embassy building.” No staff had been harmed, he added. Reports said at least one of the rioters had been killed in clashes with police.

The US embassy in Khartoum, which appears to have been the next target, announced that protesters had been expelled from its compound.

Protests, mostly aimed at US embassies and galvanised by the emergence of a crude anti-Islam video made in California, were also reported in Iraq, Iran, Bahrain, Afghanistan, Yemen, Egypt, Jerusalem and the West Bank, Kashmir, Malaysia, Indonesia and the Nigerian city of Jos. In Tunis, crowds of rioters throwing stones clashed with police outside the US embassy, who responded with teargas. A fire could be seen within the embassy compound and the American school in Tunis was also reported to be ablaze. Reports said two demonstrators had been killed.

The embassy attacks in Sudan marked the first time anti-US protests over the film had mutated into a broader anti-western revolt. In his statement on the events in Khartoum, Hague said: “The neighbouring German embassy, which appeared to be the focus of the attack, was set on fire and severely damaged. We remained in close contact with the Germans throughout the incident and were able to offer shelter to German diplomats. I am pleased to say that they are also safe.”

The unrest began in Tuesday in Cairo, when protesters stormed the American embassy, and then spread to the eastern Libyan city of Benghazi, where the US consulate was stormed and gutted by an armed mob who killed the ambassador, Chris Stevens, and three other employees.

Two US destroyers have been deployed to the Libyan coast and Barack Obama dispatched a unit of marines trained in counterterrorist operations to the country. US drones over Benghazi were targeted by anti-aircraft fire by the extremist groups in the area who are believed to have led Tuesday’s storming of the consulate. As a result, the city’s airport was temporarily closed. As Washington scrambled to protect its far-flung diplomats, US marines were also reported to have arrived to bolster security at the embassy in the Yemeni capital, Sana’a, which has also been the target of rioters.

It was unclear how much the violence was spontaneous and to what extent it had been orchestrated. The film involved was apparently made last year by a Coptic Christian living in Los Angeles, using actors who have said they had no idea they were making an anti-Islam film. The offensive language about the prophet Muhammad was dubbed in later.

A 14-minute clip of the film appeared on YouTube in July but only began to generate widespread anger this week, when it was promoted by radical Islamophobic Christians in the US and then broadcast in Egypt by Islamic activists.

The US secretary of state, Hillary Clinton, denounced the film as “disgusting and reprehensible”.

US officials have said they believe outrage over the film may have been used by an extremist Libyan group, Ansar al-Sharia, as cover and a diversion for an assault on the Benghazi consulate that had been long planned for the 11th anniversary of the 11 September attacks. The president of the Libyan assembly, Yousef al-Megariaf, agreed. During a visit to Benghazi, he described the storming of the consulate as “pre-planned to hit at the core of the relationship between Libya and the United States”.

Small anti-American demonstrations in Damascus and Tehran appeared to have been facilitated by the authorities there.