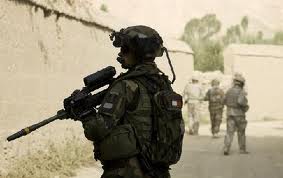 Afghan troops with US Marines in Helmand: nearly 50 members of Isaf have been killed by Afghan army or police this year.Â

If the Afghan who killed two British soldiers from the 3rd Battalion the Yorkshire Regiment on Saturday was a member of the local police, then it will add to the grim total of so-called “green on blue” incidents that have pockmarked the past nine months for Nato‘s forces across the country.

Almost 50 members of the International Security and Assistance Force (Isaf) have been killed this year by men wearing the uniform of the various incarnations of the Afghan police or the Afghan army. Seven of them have been British.

Isaf commanders prefer to describe such incidents under the umbrella of “the insider threat”, arguing it is too simplistic to assume that Afghans who have turned their guns on troops they are supposed to be working alongside do so for the same reason.

Investigators report that Taliban infiltration of the Afghan security forces is only one factor to consider â€“ grievances or grudges held for some kind of perceived dishonouring have been the motivating factors in some of the deaths.

In his interview with the Guardian on Friday, the defence secretary, Philip Hammond, said Afghans coming back from leave had sometimes been radicalised when they had been at home for brief periods.

He said 60 members of the Afghan army had been expelled after a review of their backgrounds, while 600 others were under investigation; earlier this month, concern about the recruiting practices of the Afghan local police led the US Special Operations Command to suspend the training of a new intake.

Whatever the motivations for the killings, Hammond reflected the UK’s anxiety about the issue â€“ and the damage it could be doing to the working relationship between Isaf and the Afghans â€“ by raising it with President Karzai on Thursday, saying the problem was a huge concern and had to be “put back in its box”.

None of which entirely explains why there has been such an upsurge in attacks of this kind in recent months. As Isaf forces have stepped aside to let the Afghans take the lead, and the fight, to the insurgency, it is possible that some of those behind the killings have become emboldened, and become less tolerant of the foreign forces in the country who have been bossing them around for so long.

The Taliban may have had some success with “sleepers” in the ranks, or have managed to turn or pressure recruits when they have been on leave.

There has been an exponential increase in the number of members of the Afghan National Security Forces (ANSF) over the past three years â€“ from fewer than 100,000 to almost 352,000; it is hard to imagine that a few bad apples didn’t get through the recruitment and vetting processes.

Geography might be a factor too. The Nahr-e-Saraj district where the British soldiers were killed on Saturday is still contested in some areas, and UK forces have been involved in numerous “clearance operations” over the past few months to try to drive the insurgents further away from the main population areas and into the desert.

But while British (and Afghan) officers in Helmand who spoke to the Guardian over the past few days said the vast majority of Afghans seemed genuinely mortified by such incidents, every new attack must chip away at the trust between the partners, particularly among the troops who remain at the checkpoints and forward bases, in the frontline.

Who could blame them for looking over their shoulder, or keeping their distance, from the Afghans they are supposed to be helping, mentoring and fighting alongside?

Isaf commanders say they will not be deflected from their plans to draw down forces, while handing over responsibility of more and more of the country to Afghans.

They say their strategy can work if there is an orderly withdrawal of the coalition before the end of 2014. But it will become harder for nations to hold to that line (France hasn’t) if the remaining public support for the conflict in Afghanistan evaporates over the frequency of “green on blues”.

Pressure is mounting to find solutions. But if that doesn’t help to stem the tide, politicians in some of the countries who make up Isaf may judge the public will not tolerate another two years during which troops being sent abroad are being killed by those they are supposed to be helping.