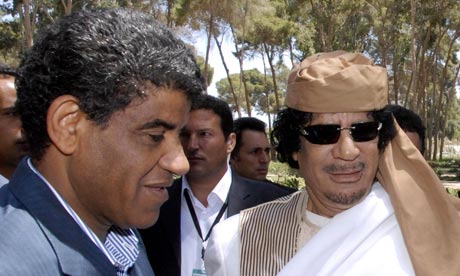 If any single person can be said to know the darkest secrets of Muammar Gaddafi‘s Libya, it is Abdullah al-Senussi, now facing a dramatic trial in which the repression and crimes of more than four decades stand to be exposed for the first time.

Just over a year since Gaddafi’s overthrow by Nato-backed rebels, Libya’s new government faces grave political and security challenges. But nothing is more likely to create a sense of closure than the dictator’s hated spy chief and enforcer being held to account. When it was announced recently that he was suffering from cancer, 15 Libyan civil society organisations appealed to his Mauritanian captors to look after “the criminal Abdullah al-Senussi” so he could finally face justice in his homeland.

Senussi is 62, stocky and tousle-haired, and was sporting an unfamiliar bushy beard when he was flown to Tripoli on Wednesday. Libyans outside the narrow circle of Gaddafi’s family and cronies always feared and loathed him.

For the US and Britain, his name is linked with the 1988 Lockerbie bombing â€“ though police and security agencies have no proof and are only making assumptions about his involvement.

The UK has already asked the Tripoli authorities to facilitate enquiries by Dumfries and Galloway police, still investigating what was the world’s worst terrorist incident until the 9/11 attacks, with 270 deaths.

Senussi’s most notorious foreign exploit was masterminding the bombing of a French airliner over Niger in 1989 in which 170 people were killed. That led to a 1999 case in which he was convicted in absentia in France. He had been unable to travel abroad freely since then â€“ until fleeing to Nouakchott in Mauritania via Morocco.

For ordinary Libyans, his name will always be associated with the notorious 1996 massacre of 1,200 inmates at Tripoli’s Abu Salim prison. “On Abu Salim there is no doubt,” said Ashour Shamis, a veteran anti-Gaddafi activist. “He oversaw and executed every detail.” It is an event of central and enduring resonance in Libya’s modern history. The arrest of a leader of the victims’ families association in Benghazi in February 2011 sparked protests that quickly spread when the government responded with force.

“Senussi is by far and away the most important Gaddafi-era figure who was still wanted,” said Oliver Miles, a former British ambassador to Libya. “If anyone knows the truth about all the various horrors of the past it is him. Everyone will be expecting that beans will be spilt.”

But a trial will be complicated and raise highly sensitive issues: Libyans will have to balance the desire for revenge against the demands of justice represented by the international criminal court, which indicted Senussi along with Gaddafi himself and his son Saif al-Islam. Senussi will probably try to implicate other former regime loyalists, some still in Libya, many in exile elsewhere in North Africa.

Senussi’s name first surfaced in the 1970s when he was involved in arresting and torturing students opposed to Gaddafi. Marriage to the “brother leader’s” sister cemented a lasting relationshiptheir ties. By the early 1980s, he led Libya’s feared external security organisation, when he is said to have recruited Abdelbaset al-Megrahi, the only man convicted of the Pan Am 103 attack. For many years he stayed was in the shadows. “You never saw him in public or his picture in the papers,” said Shamis, now an adviser to the new government. “It was only much more recently that his photograph was published.”

After the Iraq war in 2003, when Gaddafi surrendered his weapons of mass destruction and renounced terrorism, the key international role was played by the foreign minister, Moussa Koussa, who defected to Britain at the start of the uprising. Senussi was also involved in targeting influential western academics with the aim of highlighting the emergence of a “new Libya”. But he never shed his deeply sinister image.

“Senussi had a tendency to rant,” a diplomat who dealt with him at that time told the Guardian last year. “You could never be entirely sure he was fully rational. He could suddenly let fly with revolutionary or anti-western rhetoric, and you would wonder whether you could actually negotiate with him. I could well believe he has had a hand in every horrible thing the Libyans have ever done.”

US embassy cables released by WikiLeaks described him as a confidant of the leader who makes “many of his [Gaddafi’s] medical arrangements”. Like other senior Libyan figures, Senussi had extensive private business interests. Libyan, Arab and western sources all described him as a thuggish figure who would beat and abuse prisoners himself.

Still, in 2006 he met visiting US congressmen and called for “increased co-operation in all aspects” of the relationship, specifically technology and knowledge transfer. He reiterated Gaddafi’s deep concern with Wahabism and Saudi government links to al-Qaida. Senussi also took credit for putting Osama bin Laden on an Interpol watch list in 1997.

In 2011 Senussi was blamed for deaths in Benghazi as well as recruiting foreign mercenaries. Later reports from the rebel capital described how he had been sent there to “keep a lid on the situation”. Senussi first appealed for an end to protests but made it clear that if they persisted there would be a violent response. Bloody repression followed and the uprising spread. He disappeared after the fall of Tripoli in August 2011. By the time Gaddafi was killed in Sirte last October, he had gone underground, crisscrossing the desert by armed convoy with an escort of loyal Tuareg fighters from Niger.

Until the end officials in Tripoli still spoke of him with a mixture of respect and fear. The ICC described him as “personal adviser to Gaddafi on security services, policy and military matters”, saying he was still active as head of military intelligence. Whatever his formal position, Senussi was always one of the Libyan leader’s ahl al-khaimah (people of the tent) â€“ Gaddafi’s very closest entourage. That means that his day in court is certain to be closely watched â€“ in Libya and around the world.