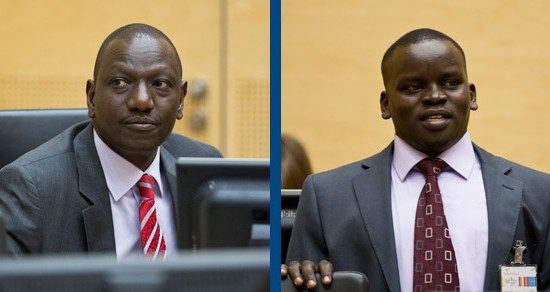 Nine reluctant Kenyans to give evidence in Nairobi

THE Government appears to have yielded to pressure from the International Criminal Court to compel nine reluctant witnesses to testify against Deputy President William Ruto.

The nine, whom ICC Prosecutor Fatou Bensouda insists have inside information on Rutoâ€™s role in the post-election bloodshed and mayhem of 2007-08, are now lined up to testify in three weeks.

According to a new ICC schedule, the witnesses will take the stand beginning September 1, when the case against Ruto and former broadcaster Joshua arap Sang resumes.

â€œAs you know, there is a tentative Court calendar that is available on the website, however it may be subject to modification at any moment,â€ ICC Spokesperson Fadi El Abdallah told the Star yesterday.

â€œIt would most likely be through video link. However, there would be a status conference between now and September 1 to iron out outstanding issues,â€ one source added.

The three-judge panel hearing the case had ruled that the witnesses should appear before the Court via video link or give evidence at an agreed location in Kenya.

The ICC is unable to force witnesses to travel to The Hague to testify in court. Attorney General Githu Muigai, who had spiritedly opposed the compulsion of the witnesses, declined to comment, referring us instead to other government agencies.

â€œThe criminal mandate lies with the DPP, the CID or the Inspector General of Police. They are the ones who can confirm whether the witnesses have been summoned,â€ Professor Muigai responded.

Ruto and Sang had appealed the ruling and the decision is still pending. However, they failed to secure conservatory orders suspending the summons.

Last month, Bensouda ran out of witnesses after the 21st prosecution witness – a former official with the Waki Commission – concluded his testimony. This means that without the nine witnesses, the two defendants would be at liberty to file a no-case-to-answer motion.

In their ruling, the Judges, headed by Nigerian Chile Eboe-Osuji, ordered the government to employ â€œall means available under the laws of Kenyaâ€ to make sure the witnesses gave evidence.

The judges said it was essential for the court to be able to summon witnesses, otherwise it would be a â€œphantomâ€ institution. Bensouda on the other hand insists that the witnesses are crucial in proving her charges, saying, for example, that Witness P0015 has evidence Ruto organised and bankrolled the deadly violence.

“According to the witness, Ruto was present and participated in 11 meetings to prepare for the attacks, during which the participants discussed the procurement of firearms, the selection of field commanders and the arrangement of finances and logistics. P0015 also described the network that Mr Ruto allegedly utilised to commit the crimes,â€ Bensouda claims.

She also said a number of witnesses described Sangâ€™s radio programmes on Kass FM in which they said he incited violence. A separate case against President Uhuru Kenyatta is scheduled to get underway on October 7.

The judges have threatened to refer Kenya to the Assembly of State Parties if the Government declines to hand over the President’s full financial records.