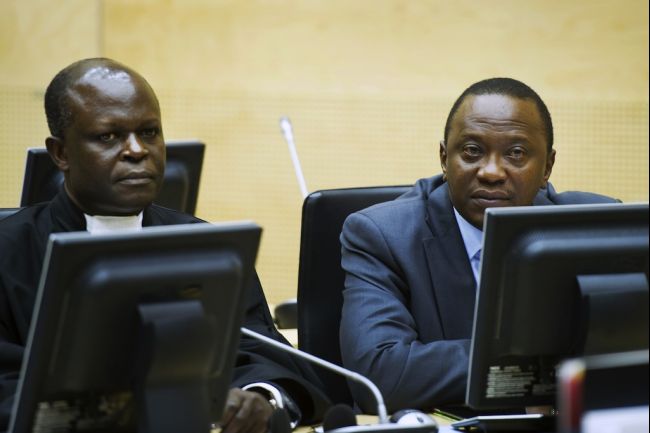 The civil society is raising concerns over two suits filed in the high court by Uhuru Kenyatta’s ICC lawyer against Mobile phone communication companies Safaricom and Airtel. The two are the biggest mobile telephone services providers and were the only industry players in 2007 at the height of pre and post election violence.

The media and the public were today Tuesday ordered to leave court as proceedings in a case filed by Uhuru’s lawyer against the two mobile firms commenced. High Court judge Isaac Lenaola made the order before President Uhuru’s lawyer Steven Kay started his submissions.

“The civil society and victims of the post election violence have raised concerns as to why the proceedings had to be held in secret.

“It is most likely that they want to validate the communication they had obtained illegally previously” a member of civil society explained.

“Presumably the petitions are about accessing communication OTP’s staff has had with Kenyan intermediaries, victims and witnesses. It would be a gross invasion of people’s privacy and a grave security threat if Airtel/Safaricom end up handing everything over such information” a human rights defender based in Nairobi noted.

“They want more information especially that touching on key witnesses so that they can intimidate them” said a civil society activists who requested anonymity owing the sensitive nature of the matter.

International Center for Policy and Conflict (ICPC) issued a statement saying they will challenge Justice Lenaola’s order and the subsequent ruling.

Here below is the statement by ICPC:

International Center for Policy and Conflict attention is drawn to two constitutional petitions filed at the High Court of Kenya against Safaricom and Airtel touching on the criminal proceedings at the International Criminal Court by one indictee Uhuru Kenyatta.
We would like to make the following observations:

International Criminal Court (ICC) indictees Uhuru Kenyatta and William Ruto continue pretending to take high moral ground despite having been put on trial for crimes against humanity by the judges at the ICC after rigorous, open and transparent judicial proceedings.

The two indictees accused of gravest atrocities known to prick conscience of humanity have perfected the art of denying everything and putting the accuser (ICC) on trial.

On several occasions the office of the prosecutor has accused some the indictees of attempts to interfere with witnesses. This latest petition could easily be construed to imply attempts at mining information touching on ICC.

Further, they have belittled as well as dismissed the claims of the victims and ICC as shrill exaggerations and or lies. Curious though is the degree of propaganda and distortion of information the two indictees have deployed in their determination mission to discredit the Court and the victims.

The latest machinations of the Mr. Uhuru Kenyatta against the ICC and fair process of administration of justice is reflected in the â€˜secretâ€™ constitutional petition filed by his lawyers in the High Court of Kenya.

The â€˜secretâ€™ petition against publicly listed communication company Safaricom and another private company Airtel is unacceptable. In a democratic human rights society, court proceedings unless on extremely defined specifications in law are supposed to take place in open and rights of public participation upheld.

Kenya situation cases before the ICC are of great importance to the public. As such Kenyan public is constitutionally entitled in accordance with Article 35 to be provided with the details of the constitutional petition and the proceedings thereof the petitions.

The preliminary proceedings of the petition filed by Mr. Uhuru Kenyatta ought to have been conducted in public before the judge making decision to bar media and public. Further, under Article 50(8) of the Constitution clearly stipulates exclusion of press or other members of the public from any proceedings can only happen if it is necessary to protect witnesses or vulnerable persons, public morality public order or national security.

From the foregoing, International Center for Policy and Conflict will take the appropriate legal action to challenge the proceedings and outcome of the petition filed by ICC indictee at High Court in order to protect public interest and victimsâ€™ rights to access information and participation in administration of justice.