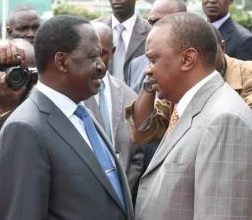 Here is the summary ofÂ  Uhuru Kenyatta’s response to the Raila Odinga’sÂ  Presidential Election Petition filed at the supreme court of Kenya.

2.The 3rd Respondent having perused the Petition has noted that no Accusation is made against him.

3.The Petition is replete with falsehood and is a robust effort to exaggerate facts and circumstances which are intended to secure for the Petitioner an unjust advantage. The Petition in essence seeks to substitute the will of Kenya people who elected the 3rd Respondent in elections that were free, fair and credible by the standards established by law.

4.The 1st Respondentâ€™s conduct of the election must also be assessed against the following novel circumstances;

(i)For the first time in Kenyaâ€™s history, 6 elections were held simultaneously on the same day.

(ii)For the first time in Kenyaâ€™s history, portions of the electoral process were conducted through electronic means including voter registration.

(iii)The general election was the first one under the new Constitution.

(v)Creation of 80 new constituencies and delimitation of new electoral units undertaken in 2011 pursuant to the provisions of Article 89 of the Constitution of Kenya.

(vi) The conduct of elections under a statutory framework for the creation of coalitions and a new Political Parties Act.

(vii)The conduct of elections that will lead to the first devolved system of Government in Kenya.

(viii) Significant delays in the enactment of electoral laws by Parliament which was compounded by several late stage amendments to such laws with the attendant consequence that the 1st Respondentâ€™s schedule of executing the efficient conduct of the elections was disrupted.

(ix)A legal challenge and political opposition to the procurement process commenced by the 1st Respondent for BVI, BVR and electronic results transmission system.

5.The Constitution does not impose any duty on the 1st
Respondent to use BVI, BVRand/or a system of transmitting election results electronically hence it is a fundamental misconception of the law for the Petitioner to contend that either registration of voters,identification of voters or transmission of the votes cast was required by law to be done via an electronic system.

6.At a press conference convened on 31st July, 2012,the Petitioner and several senior members of ODM called for a return to the manual system and declared that Kenyans did not want the BVR system. It is therefore the height of hypocrisy for the Petitioner to now claim that the only credible process of conducting elections must be founded on an electronic system.

9.The notion that electronic voting systems are the only accurate, accountable, verifiable,transparent and efficient method of voter registration, voting and results transmission

is not only fundamentally unsound in law but also factually incorrect. Such systems have failed all over the world in the past in the following instances:

(i) The BVR system crashed and/or failed in 2012 in the Ghana Presidential election.

(ii) Electronic voting systems failed during the 2000 Presidential election in the United States of America.

(iii) Electronic voting systems have failed, crashed and or malfunctioned in numerous elections in Europe and in Municipal elections in the United States of America to the extent that legislation has been introduced in some jurisdictions requirement for a manual back up system in every election.10.

In excess of 800,000 people expressed their preference for the 3
rd Respondent who are more than the total number of voters in 3 densely populated counties namely Tharaka Nithi, Kakamega and Bomet.

11.Every effort humanly possible was made to ensure that the voting method adopted by the 1st Respondent was simple, accurate, verifiable, secure, accountable and transparent.

12.The results announced were indeed accurate and verifiable in accordance with the standard established by law and were announced in a transparent and lawful manner as contemplated by Article 86 of the Constitution and the Election (General) Regulations,2012.13.

The allegations at page 14 paragraph 5.2 of the Petition are false. In particular the 3rd Respondent states that the will of the people of Kenya expressed in a free fair and credible electoral process can not in law be overturned or subverted on the basis of a hypothesis. The petition correctly understood, is founded on a hypothesis incapable of proof; it is an expression of bitterness arising from the Petitionerâ€™s loss of the poll and raises no legal issues capable of a judicial inquiry.14.

The allegations at page 16 paragraph 5.5 are false. The agents for all political parties present at the national tallying center were not ejected from the tallying center but rather