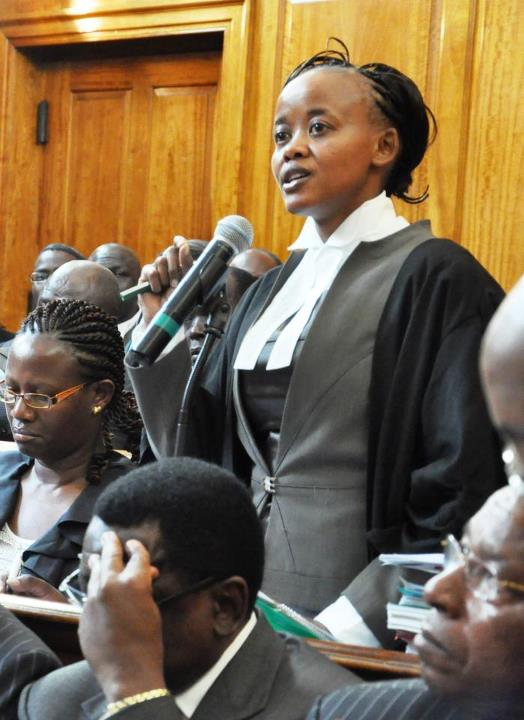 In the picture; Kethi Kilonzo representing Africa Centre for Open Governance in the Petition.

ON Saturday, March 23, 2013, the Petitioner (Prime Minister Raila Odinga) filed a response to the replying affidavits by the respondents to the Cord petition in the Supreme Court registry.

The full hearing of the petition commences tomorrow at the Supreme Court. Below is a summary of the reply to the affidavits of the four respondents â€” Chairman Isaack Hassan, IEBC, Uhuru Kenyatta, and William Ruto (full documents attached).

The Cord response can be summarized into the following:

a) Inaccurate transfer and inflating of votes from Form 34 to Form 36:

CORD provides numerous examples of how the number of votes entered in IEBC Form 34 was changed when entered into Form 36. For example, in Mogongo Primary School polling station in North Mugirango Constituency the original Form 34 figure of 3 votes for Uhuru was entered as 236, an additional difference of 233 votes; Lemelepo Water Project polling station in Kajiado North Constituency shows that while Form 34 originally indicated 2740 for Mr Kenyatta, this figure increased by 264 votes to a total of 3004 in Form 36.

b) Inflating of votes for Uhuru Kenyatta in form 36 in the Final Tally:

An affidavit sworn by ODM executive officer Janet Ongera also presents cases where the Form 36 entries were further altered to inflate Uhuru Kenyattaâ€™s votes in the final national tally announced by IEBC at Bomas of Kenya.

Webuye West, Seme, North Mugirango among others, CORD exposes a â€œscheme of inflationâ€ of Uhuruâ€™s votes in the figures announced in Bomas.

d) Use of Electronic Voting

In his reply, Odinga also states that

i. the use of technology in the elections was intended to act as a check and control system and its failure affected the results fundamentally.

ii. that the explanations given by the IEBC downplaying the failure of the system and its effect on the elections â€œtakes the common intellect of the people of Kenya for grantedâ€

iii. that the IEBC explanations about the failure of the system are not factual

Mr Odinga also has attached a sworn affidavit from an ICT expert whose testimony shows that the Kencall Relationship with IEBC and TNA compromised data management.

a) Kencall EPZ used a single IP address 196.1.26.40 for both the IEBC and Uhuruâ€™s Kenyattaâ€™s TNA. In its evidence CORD says Nicholas Alexander Nissbit (A Kencall Director) does not deny the fact that both the IEBC and TNA were hosted and operated on a single IP address as has been claimed by CORD. They also will provide proof that Kencall EPZ Limited, in reality was a call centre that was used as a gateway that linked the First Respondentâ€™s database titled African Focus and accessed through the following web address or URL https://www.intranet.kencall/apps/iebc and The National Alliance (TNA) database known as Market Race CRM and accessed through the web address or URL https://www.intranet.kencall/apps/tna.

b) The IEBC by agreeing to this arrangement compromised the elections on the basis of requirements for a an impartial, neutral, transparent, efficient, accurate, accountable and verifiable manner.

a) Claims made by the IEBC have no basis whatsoever as regards to alleged failure of the technology according to CORDâ€™s expert witness affidavits. One expert describes the IEBC claim that the server failed as â€œentirely preposterousâ€.

c) The CORD expertsâ€™ affidavits will also present evidence to show that IEBC claims that the transmission system failed due to data overload has no basis in technology terms in this day and age.

d) CORD also questions IEBC claims that their officers has forgotten passwords does not make sense as there exist mechanism in place for password reminder which standard technology industry practice as seen worldwide on social network websites like Facebook.

e) CORD will also present a sworn affidavit by an International Technology expert who states â€œThis system in my personal knowledge, has the capability to deliver up the election result within a period of around 4 hours with very negligible errorâ€.

The Petitioner also contends that:

i. IEBC has failed to present a closed register for the March 4th Elections.

ii. IEBC resolve that â€œa special register is to be generated and will be used to allow the voters to voteâ€ but never presented any proof or minutes of a meeting where this special register was finally approved and when it was gazette.

iii. A questionable voters register cannot be a foundation of a free and fair election conducted in accordance with the law.

CORD petition through various documents finally seeks to show that President Elect Uhuru Kenyatta did not meet the 50 + 1 threshold, and the declaration by IEBC was the result of inaccurate tallying and unwarranted additional votes