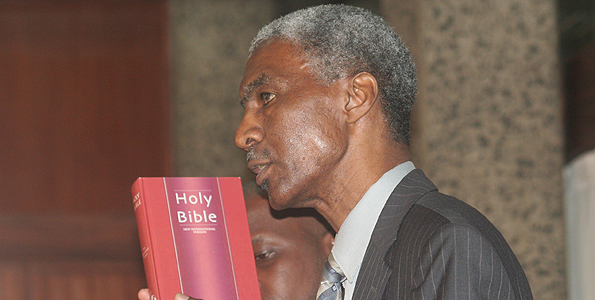 It is now in black and white that Raila Odinga HAD NOTHING TO DO with Uhurutoâ€™s case at the ICC. It was Gichangi and other Kibaki kitchen cabinet that pushed critical evidence before the Waki Commission on the 2007/8 violence that delivered them to Ocampo

His Excellencies Uhuru and Ruto are accused of funding and perpetrating the violence in which 1,133 Kenyans were killed and over 650,000 others uprooted from their homes.

The Waki Commission made a secret list of individuals who it was persuaded should be investigated and prosecuted over the violence. This was handed to the then ICC prosecutor Luis Moreno-Ocampo by chief mediator in the Kenyan crisis, Kofi Annan.

And it is widely believed that the names were presented to the commission by the Gichangi-led agency the National Security Intelligence Service (NSIS).

In his testimony before the Waki inquiry, Maj-Gen Gichangi was categorical that the spy agency was not to blame instead he listed influential politicians and businessmen from Central Kenya and Rift Valley to responsible for the violence in the North Rift as well as in Naivasha and Nakuru.

The agency indicated the influential politicians worked with criminal groups such as Mungiki and Kalenjin warriors and co-ordinated attacks against certain communities. Tellingly, this is the prosecution case against the two Jubilee leaders.

Maj-Gen Gichangi disclosed that the agency had gathered and relayed intelligence on individuals who funded and organised gangs such as Mungiki and Kalenjin youths to cause violence.

On July 21, 2008, he testified that the NSIS had names of politicians who bank rolled the militias and requested to reveal their identities in private.

â€œWe established there were politicians who were seeking elective posts as civic leaders and Members of Parliament as well as others from the private sector but, because of the sensitivity of the matter, we will avail that brief to the commissioners in private,â€ he told the Waki Commission.

The Commission also revealed that the agency collected information on the planning of violence in Naivasha by Mungiki and politicians at local and national level.

â€œAll NSIS evidence discussed here was produced as Exhibits 19 and 19A. Testimony produced in camera,â€ footnotes in the report say.
The top spy demonstrated that as early as January 3, 2008, they had information that Mungiki members were meeting â€œin an undisclosed location in Nairobi with a view to carrying revenge attacks on the Luo and Kalenjin travelling along Nairobi-Naivasha highway on an undisclosed date.â€
Chief Prosecutor Fatou Bensouda in June told trial judges that the NIS evidence was critical in her theory and was granted permission to use it. On June 10, the ICC Trial Chamber V(a) admitted into evidence 15 Kenya intelligence agency reports that had been presented to the Waki Commission, a situation that could have complicated Maj-General Gichangiâ€™s continued stay at the helm of NIS.
The intelligence reports named possible suspects for the violence in Uasin Gishu, Nakuru, Naivasha and Nairobi.
Ms Bensoudaâ€™s case revolves around the violence in Naivasha in which she has pointed fingers at President Kenyatta, and Uasin Gishu where she argues that Mr Ruto was responsible.
â€œThe documents identified various individuals suspected of being involved in such activities as inciting, planning disruption and violence and, threatening behaviour,â€ said the Waki Commission report.
In his testimony, the Maj-General pointed out that some youths took oath to commit atrocities during the post-election period with blessings from politicians.
He also told the commission that politicians in some parts of the country used coded language, asking their people to rise up and get rid of some communities.
It is not known what names the spy chief revealed to the commission in camera, but the Waki report reveals his line of argument in defence of the agency.
He said NSIS did its part to inform other security agencies of possible violence.
It was his testimony that all relevant departments were adequately briefed, but failed to act accordingly.

â€œKenyans are still asking: â€˜Where was the NSIS?â€™ I want to tell them that we did our part, but the State security agents failed to respond as expected because they were overwhelmed by the magnitude of the violence,â€ said Maj-Gen Gichangi.
The agency produced regular and special reports and security briefs at provincial and district levels in the months leading up to the 2007 General Election.

Mr Moreno-Ocampo acknowledged that evidence received from the Waki Commission and the Kenya National Commission on Human Rights was â€œfundamentalâ€ in deciding to open an investigation in Kenya.
â€œWe collected new evidence, new testimonies, new videos and new documents,â€ he said.

The commission said it had evidence that government and political leaders in Nairobi, including key office holders at the highest level of government, may have directly participated in the preparation of the attacks.

â€œCentral to that planning were two meetings held in State House and Nairobi Safari Club in the run-up to the election with the involvement of senior members of the government and other prominent Kikuyu personalities.â€
The NSIS also gave evidence indicating that on January 15, 2008, a week before the most brutal attacks erupted in Nakuru, it established that some Mungiki members were planning to discredit the government by instigating violence in Nakuru.
In a January 2008 report, the Gichangi team said that â€œsome senior Kalenjin personalities were funding ODM activists to organise youth for violenceâ€.

The agency indicated that by November 2007, Kalenjin youth were already harbouring plans to attack the Kikuyu and Kisii in parts of Rift Valley to disenfranchise the two communities for supporting certain politicians.
The prosecution alleges that President Kenyatta is criminally responsible for acts of murder, and forcible transfer committed in Nakuru and Naivasha and rapes committed in Nakuru. Mr Kenyatta is accused of co-ordinating Mungiki revenge attacks in Naivasha.

The prosecution argues that President Kenyatta was â€œthe principal contactâ€ between the Mungiki gang and the key perpetrators.

According to the prosecutor, Mr Ruto made available guns, grenades and gas cylinders and cash to perpetrators in Rift Valley and co-ordinated efforts before the outbreak of the violence.

The deputy presidentâ€™s co-accused, Mr Joshua arap Sang, is alleged to have used his daily talk show at Kass FM to spread propaganda instigating violence against the non-Kalenjin and PNU supporters and calling for their eviction.
During the hearings, the Commission accused the intelligence service of engaging in politics by conducting an opinion poll which was conducted by a section of government despite constantly warning its members against bias.
However it was commended for relaying accurate intelligence.

â€œThe service was in fact uncannily accurate in its forecasting of just what scenarios were likely to eventuate should either Raila Odinga or Kibaki win the presidential elections.â€

Adapted from the Nation