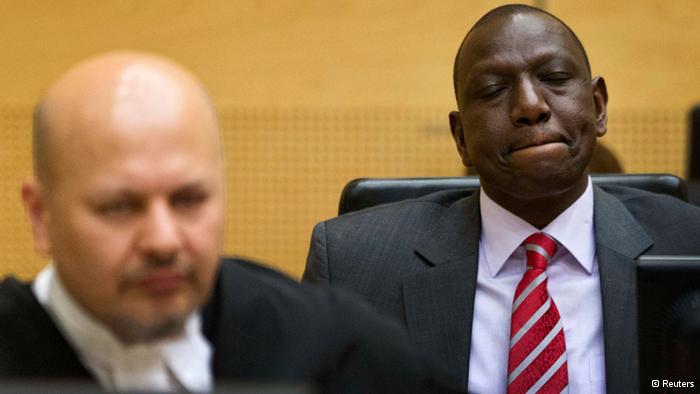 Deputy President William Ruto yesterday listened pensively how PNU side of the coalition government conspired with the ICC prosecutor to fix him for worst crimes ever on earth. It was an awkward for a leader whose sidekicks went round his home region of rift valley preaching to the unsuspecting villagers that it was Raila Odinga who fixed them at the ICC.

Finally Joshua Sang’s revelation just before the March 4th election was vindicated, Sang had told the public that it was the Mt Kenya elites who conspired to have his name and that of Ruto feature in the Ocampo list. The revelations were made by Sang’s defence counsel Katwa Kigen on his opening submission to the trial chamber.

The revelations only served to embarrass Deputy President RutoÂ  who despite knowing who were his accusers chose to lie to the public for political expediency, Ruto already had access to the evidence to be presented by prosecutors several months ago, however during the campaign his surrogates publicly lied that it was Raila Odinga who took them to the Hague.

Elsewhere Capital FM News has unearthed a video that implicates the office of the ICC prosecutor of coaching witnesses how to implicate Deputy President William Ruto and radio journalist Joshua arap Sang with post election violence that killed up 1,500.

The pairâ€™s trial opened on Tuesday, but was adjourned to next week because the the prosecutors could not trace some witnesses, who refused to cooperate until they are given more cash.

In the recording, Samuel Kosgei, one of the two witnesses who were later dropped, were warned against using specific words during their testimony.

â€œThe witnesses revealed how they were coached not to use words such as â€˜triedâ€™, â€˜reallyâ€™, â€˜recallâ€™, â€˜all I can sayâ€™, â€˜sometimesâ€™ and â€˜I believe soâ€™ when being cross-examined so as to convince the judges. One of the witnesses, Samuel Kosgei, explained how they were also told not to hesitate, scratch their noses, touch the back of their ears, faces or neck when being cross-examined because the judges would not trust their testimonies.â€

Kosgei said he was given maps of Rutoâ€™s Sugoi home and asked to sketch what he was seeing while at the same time verbally explaining the same in Kalenjin, a devastating revelation that would cripple the prosecutorâ€™s case against the pair.

â€œThis sketch shows the sitting room, the fridges, the bedrooms, everything but I have never been to Rutoâ€™s home. A map was just put on a wall and I was instructed to draw it and give an audio explanation of the sketch. I donâ€™t know where that map came from … I was also given details about oaths and told by the OTP to say that dogs were slaughtered at the Molo Milk Plant. But I donâ€™t even know where this milk plant is,â€ he claimed.

This is a fresh headache for ICC chief prosecutor Fatou Bensouda who leading the charge against Ruto and Sang. The trial for President Kenyatta, facing similar ridiculous charges at the ICC, is expected to start on November 12.