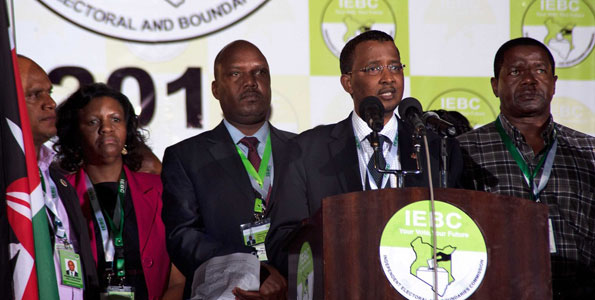 The Petition filed at the Supreme Court of Kenya by Raila Odingaâ€™s lawyers gives a glimpse of how rigging the presidential vote was executed. It can now be revealed that TNA and IEBC outsourced ICT services from Kencall EPZ Limited- specifically web hosting for transmission of vote results from polling centres to their respective national tallying centres at Gatanga road and Bomas of Kenya.

Kencall EPZ Ltd is alleged to have allocated a server that was sharedÂ  by both IEBC and TNA; what followed is shock and shame, read part of the petition herebelow for the detailed account of events: –

1.14 The First and Second Respondents conferred undue advantage to the Third and Fourth Respondents and their political parties or the Jubilee Coalition by sharing a server with them for purposes of the electronic transmission of results from the various polling stations at the said election.
1.15 In the course of the polling day, it came to the notice of some members of the public, that the
officers of a company by the name Kencall EPZ Limited, a call centre, was receiving the results of the
general elections and the specifically the Presidential ones.
1.16 That upon investigation it became clear that the said Kencall EPZ Limited, in reality was a call centre that was used as a gateway
that linked the First Respondent titled African Focus CRM and has a web address https://Â­ www.intranet.kencall/apps/IEBC and the TNA known as Marketrace on the server and whose web address or URL is https://Â­ www.intranet.kencall/apps/tna .
1.17 The First Respondentâ€™s database and the TNA database was hosted by the said Kencall EPZ
Limited on the same server with IP address 196.1.26.40 during the said presidential election;
1.1 This clandestine arrangement of co-hosting databases is not permissible by law and indeed was
not disclosed to the public or to the Petitioner and his political party or the CORD Coalition. The same
compromised the independence and the integrity of the First Respondent and that of its data in that the TNA, URP and Jubilee Coalition was able to access the First Respondentâ€™s database and intervene and/or manipulate the results of the election as the same was being transmitted from the various polling stations in the said election;
1.2 This clandestine arrangement provided an opportunity for tampering with the results of the
presidential elections.

1.3 The Petitioner shall contend and prove that the two databases were mirrored with one another, to wit, they were synchronized, hence when an entry was made or edited on one database, it would similarly be synchronized, made or edited and correspondingly reflected on the other;
1.4 The Petitioner shall further content and prove that several people were employed and trained
for the purpose of the elections to key in data into the TNA and Jubilee Coalition database. It was this data which was then used to doctor the Forms 34, 35 and 36(a) and were ferried to the First and Second Respondent for use to make the announcements at the Bomas of Kenya leading to the unlawful declaration of the Third Respondent as the duly elected President on 9th March, 2013;
1.5 Quite conveniently, and by design, the First and Second Respondent had meanwhile, delayed
the ferrying of such results from the polling stations under the pretext that steps were being taken
to rectify the system failure that had stopped the electronic relaying of results of the election;
1.6 After more than twelve (12) hours had lapsed following the official close of polling, the First
and Second Respondents then, in a bid to deceive the people of Kenya, announced that arrangements would be made to airlift Returning and Presiding Officers from the 290 Constituencies of Kenya when in fact there were no immediate plans to do so;
1.7 Despite such assurances, it was not after a period of over eighteen (18) hours had lapsed that any such officers in fact started to arrive at the Bomas of Kenya which was the National Tallying Centre for purposes of the said election, and even then, the last of such officers did not reach Nairobi until the fourth (4th) day after close of polling, to wit, Thursday, 7th March, 2013.
1.8 The above arrangement and illegal design provided an opportunity for the First Respondentâ€™s database to be manipulated in favour of the Third and Fourth Respondents, their political parties and the Jubilee Coalition thereby putting them at a distinct advantage relative to the Petitioner.