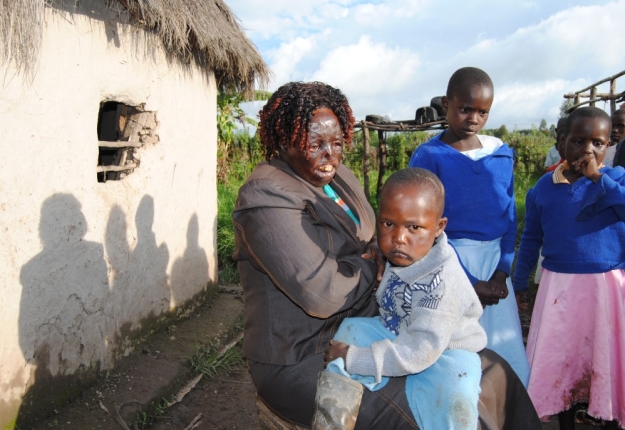 After the 2007/08 skirmishes that left a trail of distraction across the country, many Kenyans wish that the events will never happen again.

But for one Joyce Chepkemoi from Londiani, the 2007 skirmishes are something that will not easily be forgotten following the horrible ordeal that she underwent in the hands of attackers.

The 30 years old mother of 3 says that her life took a dramatic turn for the worst after her face was disfigured after she was burnt in boiling water and her husband killed during the peak of the post elections violence of 2008.

â€œMy life has never been the same again,â€ says Chepkemoi as she tries to cover her eyes from the rays of the evening sun during our interview.

Surrounded by her two little daughters and her last born son, Chepkemoi says that she can vividly remember when her two girls went to see her in hospital where she was admitted after the attack. She explains how they left screaming saying she was not their mother due to the scars she had on her face.

â€œAfter I was admitted in Kericho, my two daughters came to see me but it was so sad they couldnâ€™t recognize me as their mother since I had serious burns on my face,â€ narrates Chepkemoi as she tries to withhold tears from her eyes.

Chepkemoi observes that ever since she was discharged from the hospital 4 years ago, her neighbors and friends have been avoiding her as plague with some referring to her as a mad woman.

Joyce adds that it took a while for her three children to come to terms with the new look of their mother, with the young boy AlexÂ  frequently asking whether she will ever regain her once nice looks.

She further notes that many people never wanted to be associated with her due to her looks, something she learnt to live with it.

â€œIt is so painful when you meet with children on the road and they run off screaming out their lungs in fear of my looks,â€ She says while wiping tears off her chin.

The soft spoken lady adds that despite the horrific ordeal she experienced in 2008, she holds no grudge against the 10 men who burnt her face and robbed her off her beloved husband.

She adds that it took the intervention of well wishers in her home area who assisted her with clothing, shelter and food stuffs to sustain her 3 children.

Chepkemoi who comes from a humble background says that her in laws are not in any position to help since they are old.

â€œMy parents in law are not well off financially and they are old so living with them would have been an extra burden to them, â€ explains chepkemoi.

But amazingly, despite the numerous challenges she was facing, Chepkemoi was actively involved in preaching of peace in some of the areas perceived as black spots in Londiani during the just concluded general elections.

She says that she took it upon herself with the support of her church members to go around during the campaigning period with the message of peace since she did not want the events of 2007/08 to happen again.

â€œI felt it was right to do something to promote peace and cohesion during the just concluded elections as I wait for help, so I went round this area preaching peace,â€Â  says Chepkemoi as she holds her youngest son in her arms.

For Joyce Chepkemoi, her only wish is that she will be able to raise KES 500 000 in order to have facial plastic surgery in the USA.

She adds that she wants to be good looking for the sake of her three children.

And as we wind up our interview with Chepkemoi, her prayer is that President Uhuru Kenyatta and his Deputy William Ruto will heed to her call and help her raise the money.