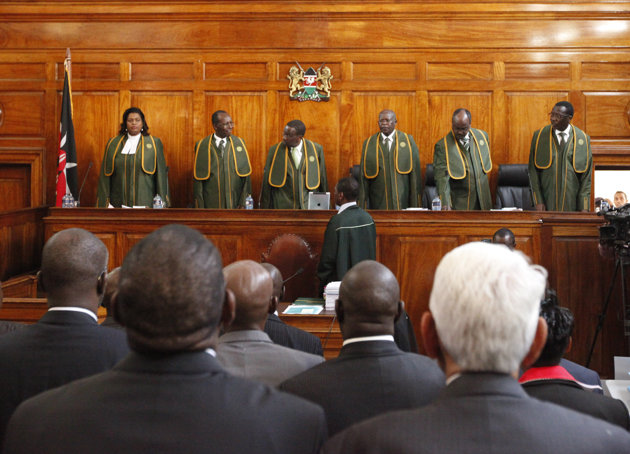 The Supreme Court has decided.
It took them less than ten minutes, or so it seemed.

Uhuru Kenyatta and William Ruto have been validly elected as President and Deputy President of Kenya. The Jubilee Coalition can go ahead and form the next government and rule Kenya for the next five years.

In my opinion, it is a defeat for Kenya.

It is a defeat for all Kenyans, especially those millions who lined up for hours upon hours,Â  waiting for their chance to cast a vote for president,Â  governor,senator, national assembly member, womenâ€™s representative and ward representative.

It is a defeat for the rule of law.

It is a defeat for the truth.

It is a defea for justice.

It is aÂ  pyrrhic defeatÂ  for Uhuru Kenyatta, who now has the challenge of ruling a divided Kenya, lacking national and moral legitimacy.

Those of us who are patriots and democrats still stand in solidarity withÂ  Raila Odinga, Gladwell Otieno and their lawyers who has been vindicated in their claims that the IEBC bungled the elections.

I must that such a historic ruling touching so closely on our hard fought democratic gains had to be delivered in such a taut ambience with the Supreme Court judges, litigants and their lawyers, literally under occupation from a phalanx of robocops on horse back, totting assault rifles and walkie talkies taking us pack to the televised images of Kibakiâ€™s infamous 2007 civilian putsch when terrified journalists, observers and political party agents were forced out of the Kenyatta International Conference Centre at the tip of menacing bayonets, amidst a repressive clampdown and crackdown on the media at the diktat of the former internal security minister now retired and in eternal repose, somewhere in heaven, if not hell.

Here areÂ  some of the tweetsÂ  Kenyans were sharing as they awaited the decision:

@pkeruya. You forget that that power given to 6 of us is derived from 40 million Kenyans, not just those who voted!

GSU heavily present along Mbagathi way! Do they know what we don’t?

Ati the Supreme Court has been sealed off with a “CRIME SCENE DO NOT CROSS” tape…..crime gani tena jamaneni? #SwalaNyeti

I insist we love this country so much we can’t destroy it. Kindly stop preaching peace and preach patriotism!!!!!!

PM Raila Odinga to follow Supreme Court ruling from his office at Harambee Avenue at 3.30 pm.

I went to buy petr[i]ol in a bottle to clean my equipment at home but was turned away Reason: I could turn into a bomb!

The amount of security within and around #SupremeCourt will make one think that a Coup is about to take place!

CITY Hall Way, section of Wabera Street barricaded by GSU personnel as the country awaits ruling on Railaâ€™s petition by the Supreme Court

RT “@agutamonda A government scared of its own people to the extent of mobilizing heavily armed security for itself is illegitimate.”

RT @kelvinnews: Road outside #Kenya’s Supreme Court closed off with tape that says ‘Crime Scene Do Not Cross’….. pic.twitter.com/yupu6W3FBK

The security around Supreme Court is too tight.

@kipmurkomen This thing should just come and we move on

@kipmurkomen tight security is meant to stop @UKenyatta and @RailaOdinga from a physical brawl outside SCORK otherwise Kenyans are peaceful.

>> RT @makodingo #nw Nikita. Alert me when the GSU go back to whatever it is they do when they’re not intimidating Kenyans

i trust you have the will of the people of kenya in heart.

You are all reminded that In a democracy, dissent is an act of faith. #PresidentialPetition

The KE media’s self retraint reveals a Society terrified by its own capacity for violence. -Michela Wrong #KeElections13 #MediaCredibility

whatever happens this afternoon, we move forward painfully into a pimply and promising adolescence. Lets manage these hormones well.

For the moment, the supporters of CORD can cite the many feathers in their cap:Â  the Supreme Court in the scrutiny establishing the many anomalies, illegalities and blatant flaws, which to use a word popularized in Kenyan circlesÂ  by the erudite Ms. Kethi, irregularities which â€œvitiatedâ€ any results alleging that Uhuru Kenyatta â€œwonâ€ the March 4 Presidential elections in Kenya.