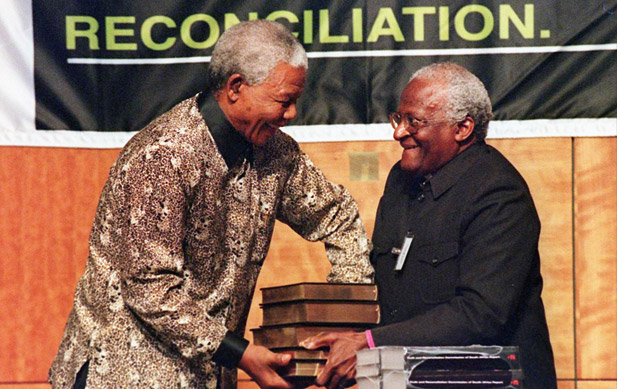 Statement by President Mandela on receiving the report of the TRC

Chairperson of the TRC, The Most Reverend Desmond Tutu
Presiding Officers of our Houses of Parliament
Ministers and Deputy Ministers
Leaders of Political Parties
Commissioners of the TRC
Distinguished Guests
Fellow South Africans

South Africa is no longer the country it was when we adopted the Interim Constitution in 1993, when, together, we resolved to overcome the legacy of our violent and inhuman past.

Our of that negotiation process emerged a pact to uncover the truth, the better to build a bright future for our children and grandchildren, without regard to race, culture, religion or language.

Today we reap some of the harvest of what we sowed at the end of a South African famine.

And in the celebration and disappointment that attends such harvest, we know that we shall have to sow again, and harvest again, over and over, to sustain our livelihood; to flourish as a community; and for our generation to know that when we finally go to rest forever, our progeny will be secure in the knowledge that two simple words will reign: Never Again!

Today we receive a report whose creation has itself been a part of what has brought us to where we are.

It represents a toil of nurturing the tender fields of peace and reconciliation and the plodding labour of opening the bowels of the earth to reveal its raw elements that can build and destroy.

The report we receive today – and which is to be completed when the Amnesty process has run on its course – cannot but help signal the end of one season and the beginning of another.

And so as we observe this stage of the TRC process, we should pay tribute to the 20,000 men and women who re-lived their pain and loss in order to share it with us; the hundreds who dared to open the wounds of guilt so as to exorcise it from the nation`s body politic; indeed the millions who make up the South African people and who made it happen so that we could indeed become a South African nation.

That so many have taken part in the Commission`s work so far – individuals, organsiations and institutions – and that our media provided us with such extensive coverage and commentary which the public followed with interest, tells us that we were and are engaged in a truly national process.

At the helm of it all has been the Most Reverend Desmond Tutu, who has, during the hearings, conveyed our common pain and sorrow, our hope and confidence in the future.

To you and all the Commissioners and staff of the TRC we say, on behalf o the nation: Thank you for the work you have done so far!

If the pain has often been unbearable and the revelations shocking to all of us, it is because they indeed bring us the beginnings of a common understanding of what happened and a steady restoration of the nation`s humanity.

The TRC that is guiding us on this journey is the TRC of all of us. It flows from our interim constitution.

It was established by an act of parliament with overwhelming support. It is composed of individuals from all backgrounds and persuasions.

It has put the spotlight on all of us.

Though the interim report is formally given to me as President, it is in reality a report to all of us. For that reason it is being released to the public and given to our elected representatives without a moment`s delay.

Its release is bound to reawaken many of the difficult and troubling emotions that the hearings themselves brought.

Many of us will have reservations about aspects of what is contained in these five volumes.

All are free to make comment on it and indeed we invite you to do so. And for those who feel unjustly damaged, there are remedies.

It will seem artificial to some to place those fighting a just war alongside those whom they opposed.

It will be difficult for the victims of gross violations of human rights to accept the philosophical account of the trade-off between punitive justice and a peaceful transition.

It may be difficult for many to accept the finding that the apartheid state was the primary perpetrator of gross human rights violations.

Yet if we are true to our founding pact, we cannot equivocate about a system which exacted such inhumanity, There can be no dissonance with regard to the clarion call: Never Again!

Such is the injunction of our democratic constitution and bill of rights. Such is the logic of our survival and prosperity as a nation.

I therefore take this opportunity to say that I accept the report as it is, with all its imperfections, as an aid that the TRC has given to us to help reconcile and build our nation.

The Commission was not required to muster a definitive and comprehensive history of the past three decades. Nor was it expected to conjure up instant reconciliation. And it does not claim to have delivered these either. Its success in any case depended on how far all of us co-operated with it.

Yet we are confident that it has contributed to the work in progress of laying the foundation of the edifice of reconciliation. The further construction of that house of peace needs my hand. It needs your hand.

Reconciliation requires that we work together to defend our democracy and the humanity proclaimed by our constitution.

It demands that we join hands, as at the Job Summit tomorrow, to eradicate the poverty spawned by a system that thrived on the deprivation of the majority.

Reconciliation requires that we end malnutrition, homelessness and ignorance, as the Reconstruction and Development Programme has started to do.

It demands that we put shoulders to the wheel to end crime and corruption, as religious and political leaders committed themselves to doing at the Morals Summit last week.

More particularly, we will start consultations with all sectors of society on how to contribute to the variety of programmes required to restore the dignity of those who suffered and to give due recognition to those who paid the supreme sacrifice so that our nation could be free.

This Report contains material that could sustain endless finger pointing and gloating at the discomfort of opponents whom the TRC has pronounced to be responsible for gross violations of human rights.

And in the brevity and the pattern of media reports, the fundamental principles it raises may be missed, creating an impression that the honourable thing to do would have been to acquiesce in an inhuman system.

But we should constantly keep our minds on the broad picture that has emerged.

We are extricating ourselves from a system that insulted our common humanity by dividing us from one another on the basis of race and setting us against each other an oppressed and oppressor.

In doing so that system committed a crime against humanity, which shared humanity we celebrate today in a constitution that entrenches humane rights and values.

In denying us these things the Apartheid State generated the violent political conflict in the course of which human rights were violated.

The wounds of the period of repression and resistance are to deep to have been healed by the TRC alone, however well it has encouraged us along that path.

Consequently, the Report that today becomes the property of our nation should be a call to all of us to celebrate and to strengthen what we have done as a nation as we leave our terrible past behind us forever.

Let us celebrate our rich diversity as a people, the knowledge that when thRC in its wisdom apportions blame, it points at previous state structures; political organisations; at institutions and individuals, but never at any community. Nor can any individual so identified claim that their brutal deeds were the result of some character inherent in any community or language group.

All of us are therefore now more free to be who we really are; no longer forced to experience some of those things which are most precious to us – language, culture or religion – as walls within which we are imprisoned.

Above all, we should remember that it was when South Africans of all backgrounds came together for the good of all that we confounded the prophets of doom by bringing an end to this terrible period of our history.

Though the liberation movement was the primary agent of this change, it could not have done so on its own.

To the extent that popular resistance stirred all of South Africa into action, to that extent are we all responsible for an outcome that did not take us deeper into the horrors of a wasteland.

Now the challenge is for all of us to protect our democratic gains like the apple of our eye.

Free at last, we are all masters of our destiny.

A better future depends on all of us lending a hand – your hand, my hand.